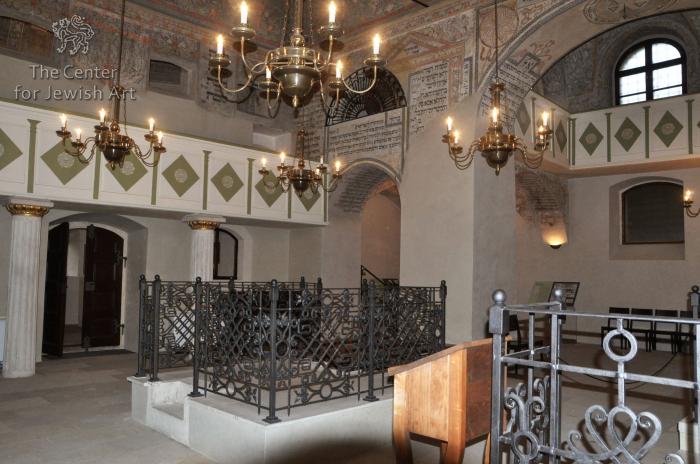 The murals cover the walls and vaults of the central prayer hall (10 m x 8 m), the side aisles, northern and western parts of the women's gallery and vestibule. The murals on the walls of all the rooms have been preserved in fragments. All the murals were restored after World War II, in 1963, and from 1979 to 1986 when the synagogue was converted into a museum.

The murals are shaped as a carpet's floral ornament and cover the entire surface of the vaults and walls. The composition of the decorations included complicated geometrical frames, panels with the text of prayers and psalms, the image of the temple implements, and birds.

The murals of the prayer hall, the side aisle, the women's galleries, and the vestibule were created at different times and by different masters. Due to the fact that many of the inscriptions were preserved in fragments and restored at some point, the dates that they were painted may vary from the time of their original creation. However, other historical sources suggest that the originals and restorations can be dated within a decade of each other.

The various signatures of artists and donors can be divided into three stages of synagogue decoration.

The first stage refers to the year 1640. This date is posted on the ceiling of the central prayer hall. The murals of this stage were made by two artists: Mordechai son ... from Cracow and Meir Yehuda Leib from Zȕlz.

The second stage of the murals relates to the year 1695. These murals in the women's gallery were painted by artist Isaiah Maler, son of Rabbi Yehuda [Leib?] from Cracow.

The third stage of the murals refers to the year 1769. These murals on the side aisle were created by Anshel, son of Rabbi Meir.

There are also some inscriptions in the women’s gallery and in the vestibule from the years between 1705 – 1720. 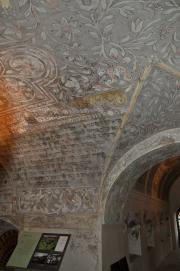