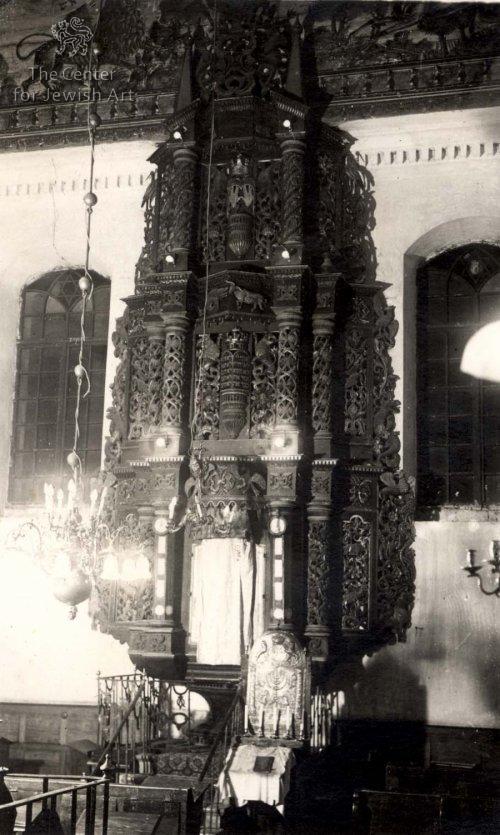 The interior of the Great Synagogue is known from interwar photographs. The walls of the prayer hall were crowned with a dentiled cornice echoing the exterior one. The hall had eight windows; it was spanned with a wooden barrel vault decorated with paintings. A photograph shows a lion on the left side of the Torah ark, while the legs of a unicorn are discernible on the right. A local Russian teacher wrote in 1898 that “the vault is decorated artistically with different types of flora and fauna” (I. Ptashkin, “Mestechko Keidany”, in Pamiatnaia knizhka Kovenskoi gubernii na 1899 god (Kovna, 1898), 71).

The magnificent three-tier wooden Torah ark was situated at the center of the southeastern wall. According to a memoir, it was decorated with “colored and gilded flowers, animals and birds;” it also included an “eternal” calendar (seen on the columns of the first tier). On one of the columns hung a parchment under glass, with a versified text about the erection of the synagogue, which referred to the year when the work was finished, אשרינו בשנת (i.e. 1807). (Borukh Haim Cassel, “Di shtot keydan,” in Keydan: a zaml-bukh, eds. Borukh Khaim Cassel and Haim Yakov Epshtein (New York, 1930), p. 27).

The ark stood on a massive concave base and was accessed by stairs fenced by wrought metal bars. The first tier of the ark included the Torah shrine flanked by two pairs of openwork carved columns; the central, convex part of its frieze was decorated with a pair of griffins. In the center of the second tier, the convex Tablets of the Law were flanked by rampant regardant lions and topped by a crown inscribed with כתר תורה (the Crown of the Torah); this composition was flanked by two pairs of carved columns. The frieze of this tier was decorated with the combat of the Leviathan and Wild Ox – a scene of Messianic days. The third tier had only one column on either side. Hands in the priestly gesture of blessing, surmounted with a Crown of the Priesthood in its center, were flanked by rampant regardant creatures, probably lions. The ark was topped with two lateral obelisks and central openwork. All the tiers of the ark were flanked with openwork panels and wings, carved with floral motifs and depictions of birds, animals, and sea monsters. 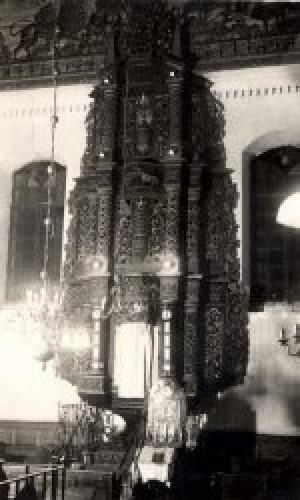