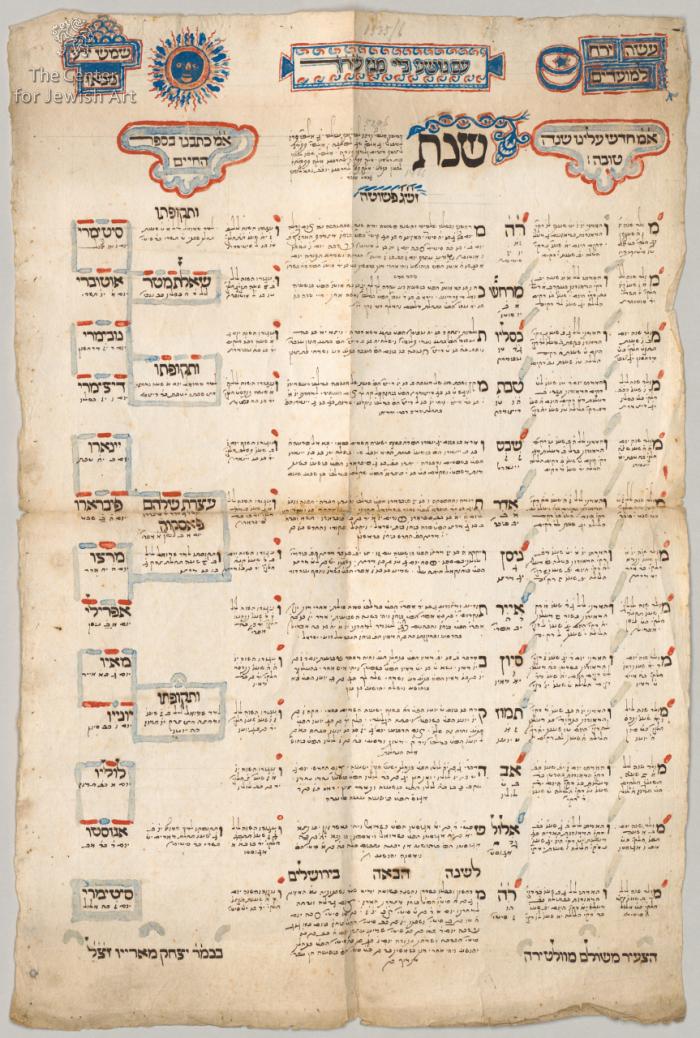 The wall calendar for the year 1536-1537 was written by the scribe Meshulam of Volterra son of Isaac of Reggio (משולם בן יצחק מארייו). It was produced inItalyand possibly meant to be hung in a synagogue. The calendar includes the relevant calendrical information for the Jewish observance and the correlative dates in the Christian calendar. The moon and a star on the right of the calendar and the sun with a face on the left and their inscriptions symbolise the solar and lunar cycles which are prominent in the Jewish calendar, since the months are lunar and the year is solar.

The necessity for both Hebrew and Christian calendars mirrors the close contact of the Jewish community with its surrounding culture and meets the immediate economic needs in matters of commerce and trade.

Calendrical material was usually included in prayer books such as mahzorim (prayer books for festivals), and sifrei minhagim (Books of Customs) and other compendia. In the early modern period this information was concentrated separately in Sifrei Evronot (Books of Intercalations); this text continued to be cultivated in manuscript while simultaneously emerging in print (Straus 2006, Introduction; Carlebach 2011:49).

In contrast to a relatively large number of print and manuscript versions of Evronot books, single-year calendars were fewer and printed mainly to be hung on synagogues' walls or posted in public spaces (Carlebach 2011:32).

Carlebach, however, points out that while printed calendars promoted uniformity in forms and texts, many errors plagued the texts during the printed process. Consequently, paying for a scribal copy may have been better alternative long into the age when print versions had become available (Ibid.:51-54, 59). In the case of our scribe Meshulam of Volterra, although it is hard to know the reason for copying by hand, the basic structure of his calendar follows certain conventions in form and material that have been formulated for printed wall calendars throughout the early modern period in Europe (Carlebach 2011:66-67, and

cf. figs. 1 and 2). However, whereas relatively many printed Hebrew calendars have survived (see Ibid.), manuscript calendars are rarely found. Our calendar survived only because it was kept within a book (Cod.hebr. 425; see History). 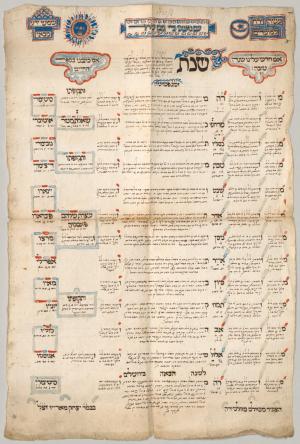 Material Stucture
Material Decoration
Material Bonding
Material Inscription
Material Additions
Material Cloth
Material Lining
Tesserae Arrangement
Density
Colors
Construction material
Measurements
Full sheet 440 x 290 mm.
Height
Length
Width
Depth
Circumference
Thickness
Diameter
Weight
Axis
Panel Measurements
Iconographical Subject
Unknown |
Languages of inscription
Unknown
Type of grave
Unknown
1
Coordinates: 44.696285, 10.636174
Ornamentation
Custom
Contents
Hebrew manuscript wall calendar for the year רצ"ז 5297 (1536-1537), entitledז'ש'ג' פשוטה . This abbreviation indicates the type of year (out of the 14 possible types), which is a Regular (פשוטה, Peshuta) as well as a Perfect Year (ש, Shelema) of 355 days. In this type of year the first day of New Year falls on the Sabbath (ז) and Passover on a Tuesday (ג). The calendar includes the non-Jewish counterparts, and consists of 13 horizontal sections, 12 for the months, staring with the month of Tishrei and its first day, the Jewish New Year, Rosh ha-Shanah, and one for the next New Year, and 6 vertical columns. The Jewish dates appear on the right; Christian dates are shown on the left. The first and second columns on the right indicate the date of the new moons (moladot). The first column calculates the hour and its divisions ((דקים, either of the day or night of the new moons. The second column commencing with 'the real one' (והאמיתי), specifies the astronomical dates and zodiac signs, beginning with Libra for Tishrei. The third and wider column includes the name of the new Jewish month, the name of each week's Torah portions (according to the Italian rite), the holidays or fast days and the main ritual events in the Jewish year which occur during that month. The fourth column commencing with 'contrary to' (וניגודו) calculates the dates of the new moons in the Christian calendar in correlation with the Hebrew dates. The fifth column marking the new tekufot according to the 2nd-century Babylonian school of Mar Shmuel (ותקופתו כמר שמואל), and notes the proper day on which Jews begin to recite the prayer for rain (שאלת מטר). The final column on the left contains the Hebrew date of the beginning of the Christian months and the movable Easter feast in this year. The names of the Christian months are in Italian in Hebrew characters: Sitimri, Otobri (September, October), etc.
Codicology
Scribes
Meshulam of Volterra son of Isaac of Reggio יצחק מארייו)).
Script
Written in cursive Italian script in black ink, except for various titles in built-up square script.
Number of Lines
6 columns of varying widths. The 12 monthly sections are written in 4-5 lines; specifications on the year 1537 at the top and the 13th section at the bottom are in 6-7 lines.
Ruling
Ruling in pencil: usually for the first horizontal line of each of the section; and 1+ 2 + 2 + 2 + 2 + 2 + 2 + 2 vertical lines.
Pricking
Pricking is noticeable in the left, upper and lower margins in accordance with the ruled lines.
Quires
None.
Catchwords
None.
Hebrew Numeration
None.
Blank Leaves
The back of the sheet is blank.
Direction/Location
Façade (main)
Endivances
Location of Torah Ark
Location of Apse
Location of Niche
Location of Reader's Desk
Location of Platform
Temp: Architecture Axis
Arrangement of Seats
Location of Women's Section
Direction Prayer
Direction Toward Jerusalem
Coin
Coin Series
Coin Ruler
Coin Year
Denomination
Signature
Colophon
At the bottom of the page is the scribe's colophon: הצעיר משולם מוולטירה בכמ'ר' יצחק מארייו ז'צ'ל' (The young Meshulam of Volterra, son of Isaac of Reggio (יצחק מארייו), the righteous of blessed memory). The name of his father's town ארייו is identified by Steinschneider (Ibid.) as Arezzo and by Beit-Arié (2013:132) as Reggio. The date at the top of the sheet, the year 5297 (שנת רצ"ז) from the creation of the world (1536-1537), is followed by chronological dates from the creation to the destruction of the Temple.
Scribal Notes
None.
Watermark
Hallmark
Group
Group
Group
Group
Group
Trade Mark
Binding

The scribal decoration at the top of the calendar consists of blessings and biblical quotations in dark brown built-up letters within red and blue frames. The initials and Christian months are marked in blue and red.