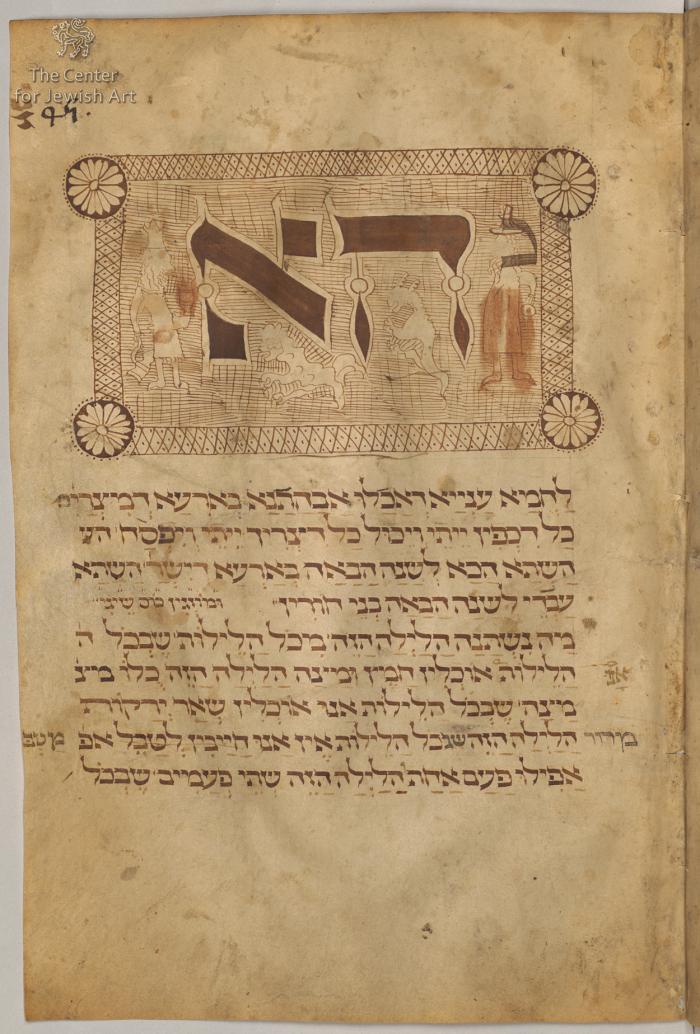 Because of the missing text (see Condition) it is difficult to reconstruct the original contents of the Siddur. It begins with Ethics of the Fathers 1:5, followed by Psalm 104 and 14 Psalms of Degrees (Ps. 121-134) for the conclusion of the afternoon service on Shabbat.

The evening services (מעריבים) for Passover, Shavuot and Sukkot include different piyyutim, among which is the piyyut for the second Passover evening ליל שימ(ורים) אדיר ונאה (fol. 24v; Davidson 1924–1933, ל 723) by R. Meir bar Itzhak Shatz (Worms, 11th century), whose acrostic name Meir is marked by dots on fol. 25v. The piyyutim are of the western Ashkenazi rite (see Fraenkel 1993:24-25). In the piyyut for the evening service of the second day of Shavuotוירד אלהים  (fol. 33; Davidson 1924–1933,ו 263), which was composed by Itzhak ben Moshe (11th century; Fraenkel 2000:טו and note 63), the name Itzhak is marked.

The name Eliezer berabi Natan is marked in acrostic by dots within a piyyut of his, also for the evening service of the second day of Shavuot) אשריך ישראל fol. 33v; Davidson 1924–1933, א 8454).

The two piyyutim (fol. 41-41v) ביום טובה היה טוב by Shem-Tov Falaquera (Spain c.1225-1295) andשפרם רם ברוחו (Davidson 1924–1933, ש 2114), for the evening service of the second day of Shavuot when it falls on the Sabbath, were added by Hand 1 during the 14th century. The second piyyut opens with a note אחר בניגונו מרי הרבי שמואל הנהרג (another melody of the murdered R. Shmuel), i.e. Shmuel ben Kalman (ben Kalonimus) called Dovlin (or Dewlin) Hahazan (the cantor) ofErfurtwho was the poet of this piyyut and was martyred before 1280 (Fraenkel 2000:17 and 69, used our manuscript for this piyyut).

The last part of the manuscript is the Passover Haggadah, which follows the Ashkenazi rite. A later hand added the letter כ (kaf) before the word Ha which opens the Haggadah (fol. 45). The reciting of Keha instead of Ha is also characteristic of Ashkenazi Haggadot. The Haggadah ends with three liturgical poems: אז רוב נסים, אומץ גבורתך and כי לו נאה.

The three scribes who copied the Siddur divided the work between them by quires corresponding to different parts of the text, which probably allowed them to work simultaneously.

The decoration of the manuscript was executed only by Scribes B and C. Scribe B used very simple decorative motifs, like dots surrounding the letters of some initial words; on the other hand, Scribe C executed an elaborate panel opening the Haggadah with a depiction of the raising of the second Passover cup of wine (fig. 1).

A similar stylistic approach is found in the Reggio Mahzor produced inFranconiain the first half of the 14th century. In both manuscripts (figs. 1-2) the panels are formed by hatching in ink; in the Reggio Mahzor it is red and brownish ink, while the figures are in spared-ground technique. The panels are surrounded by a frame and the corners are decorated with rosettes. The stems of the letters within the panels are decorated with roundles and surrounded by a contour. Human figures and grotesques, which are much more detailed in the Reggio Mahzor, occupy the space between the letters and the frame and between the components of the letters. Another stylistic resemblance to our panel appears in a Mahzor seemingly produced inBambergin 1279.  The opening panels in both manuscripts (figs. 1 and 3) have similar frames in spared-ground technique.

All these similarities suggest that our manuscript was produced in the region of Franconia, perhaps not far fromBamberg, in the early 14th century.

Two flyleaves at the beginning and end of the manuscript are today housed in the Staatliche Graphische Sammlung in Munich(Inv. Nos. 171528 and 171530). These are woodcuts which originally appeared in the Schatzbehalter der wahren Reichtümer des Heils (Treasure Chest of the True Riches of Salvation) written by the Franciscan preacher Stephan Fridolin (1430-98) and published by Anton Korberger in Nuremberg in 1491 (see BSB Cod.hebr. 14, Remarks and Illuminated Documents). 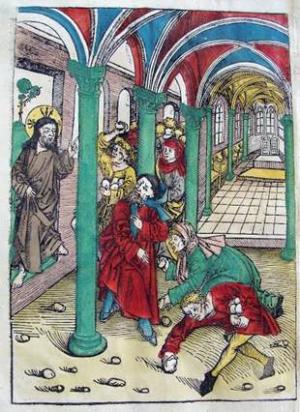 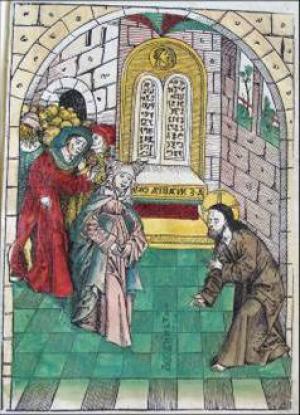 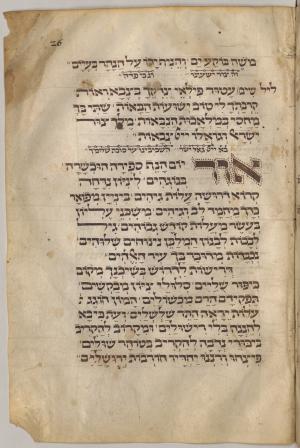 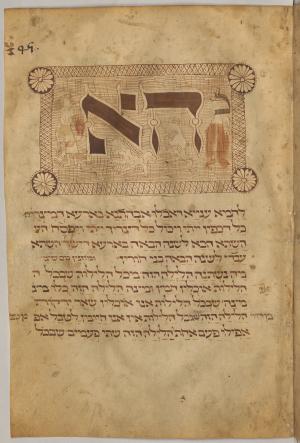 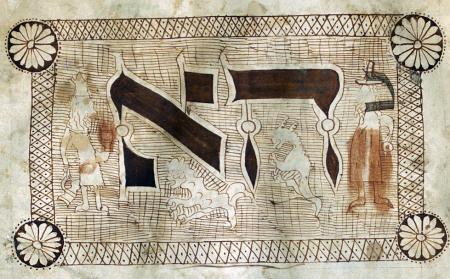 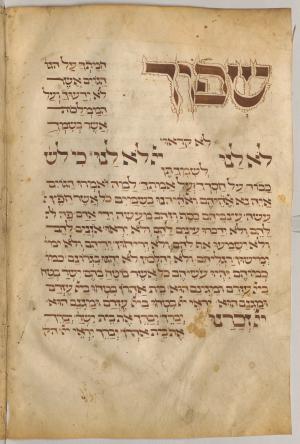 15th-century binding. The spine and30 mm. of the wooden boards (306 x209 mm) are covered with a strip of white pigskin decorated with a stamped row of floral stems. The spine has three double cords, head and tail bands are missing. Holes and nails are situated along the upper and lower edge of the front cover, denoting the place of two clasps. They correspond to the carved squares on the back cover where two straps were attached.

From the original stitch holes, it is apparent that all parts of the codex were originally bound together. The binding was probably done in the Augustinian Friars monastery of St. Vitus inNuremberg(Munich, EBDB p001297; Hernad 1990:66; Kyriss 1951/58, No. 19).

This binding is similar to those of other Hebrew manuscripts from Schedel's collection (see History, and CJA Documentation of BSB Cod.hebr. 14 (figs. 1-2), Cod.hebr. 21 and 69). Two woodcut flyleaves at the beginning and end of the manuscript are housed today in the Staatliche Graphische Sammlung inMunich(Inv. Nos. 171528 and 171530). According to a note by librarian Wilhelm Meyer (first back flyleaf) they were removed in 1883.

The decoration was done by Scribe B and Scribe C in brown ink: