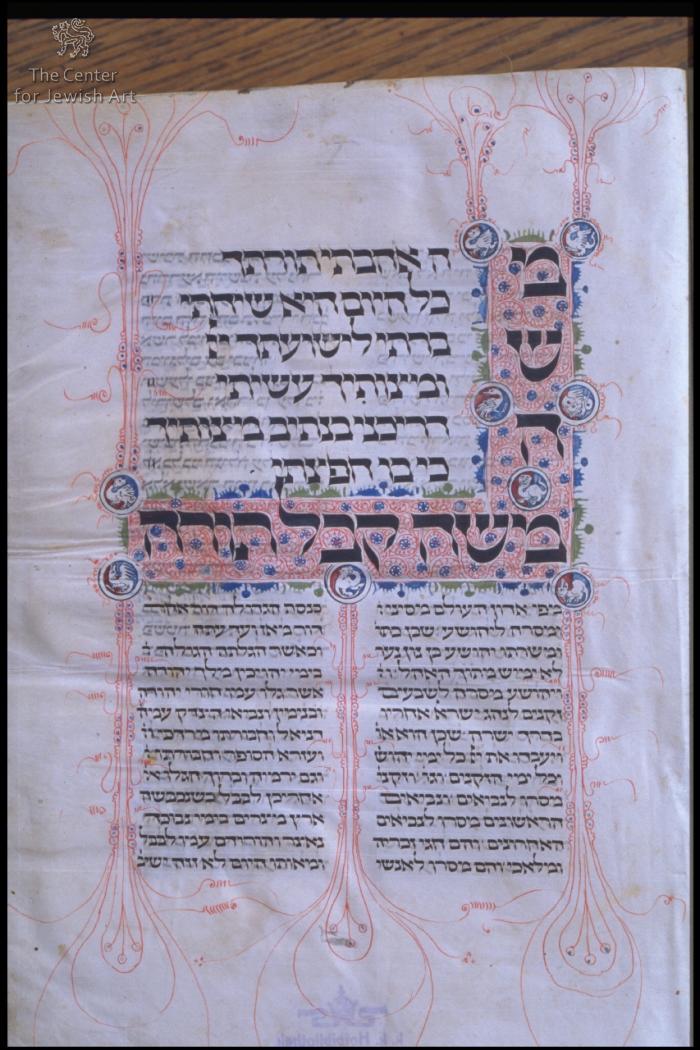 Link to ONB's Database, Vol. I 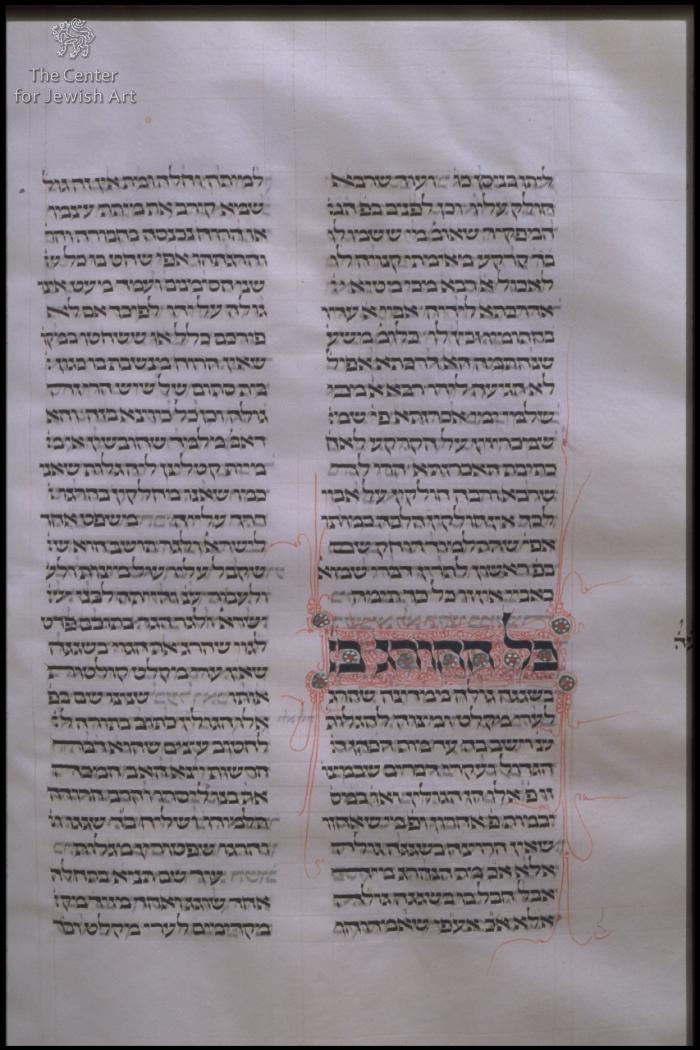 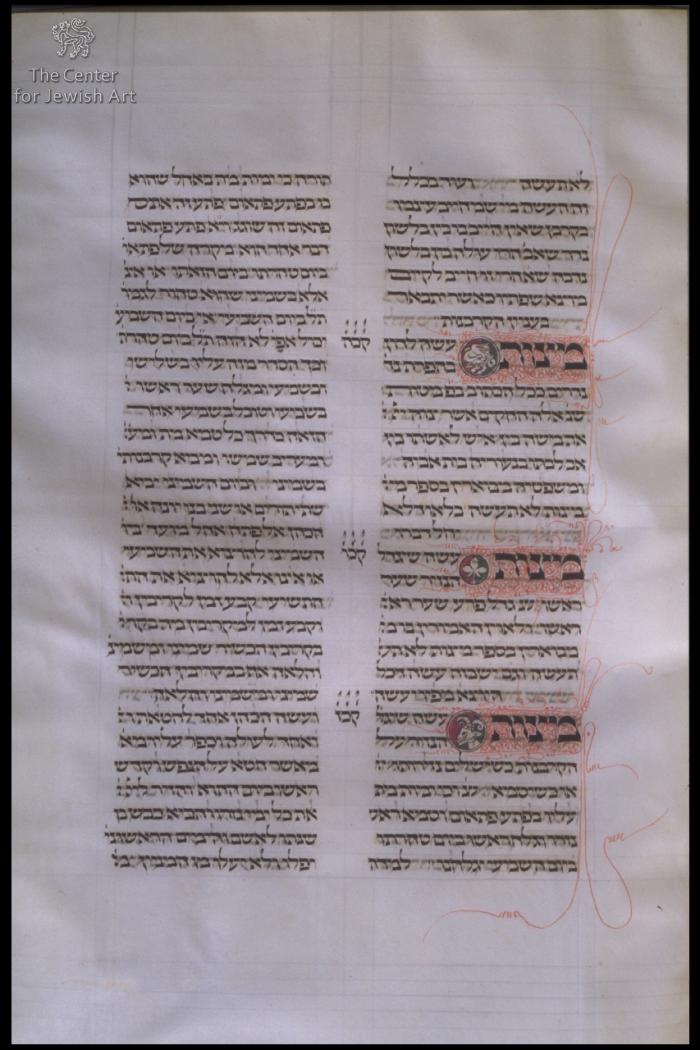 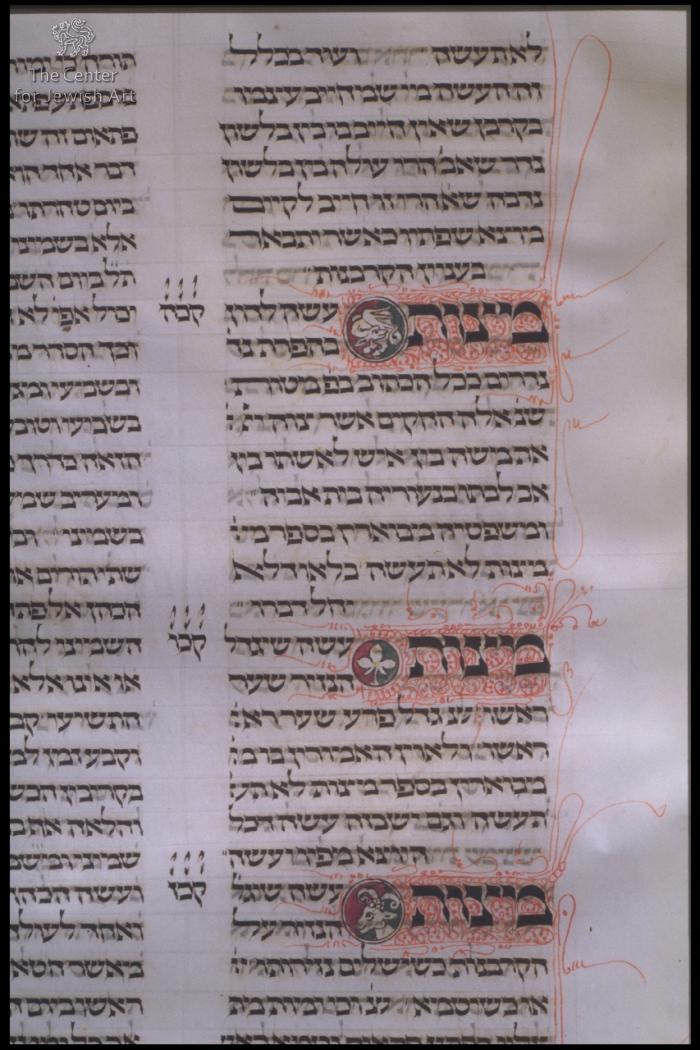 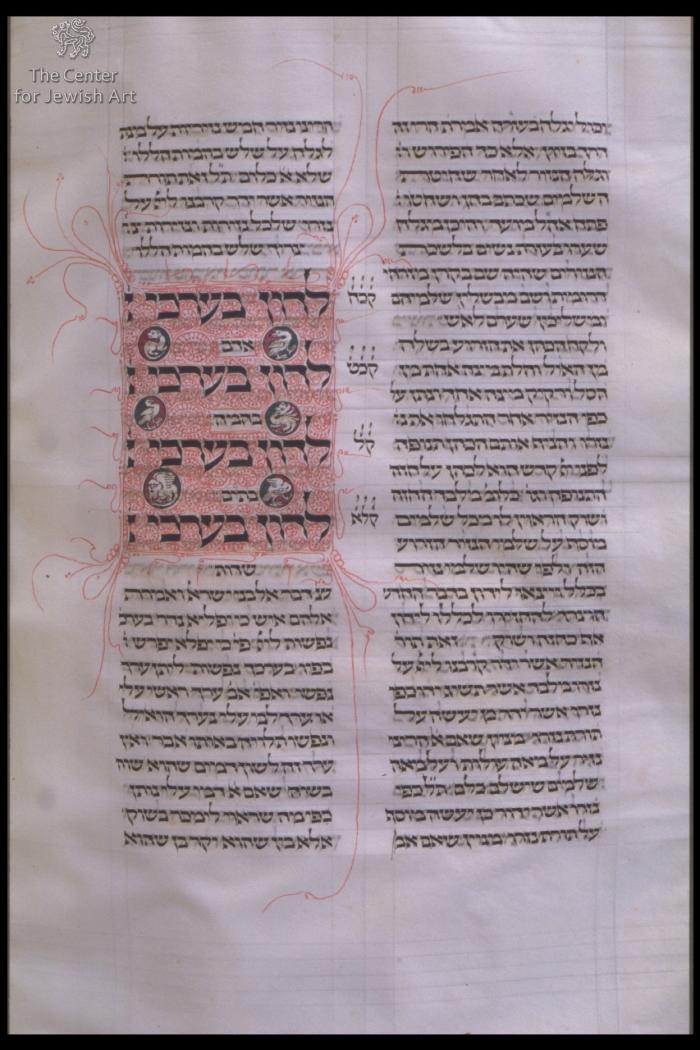 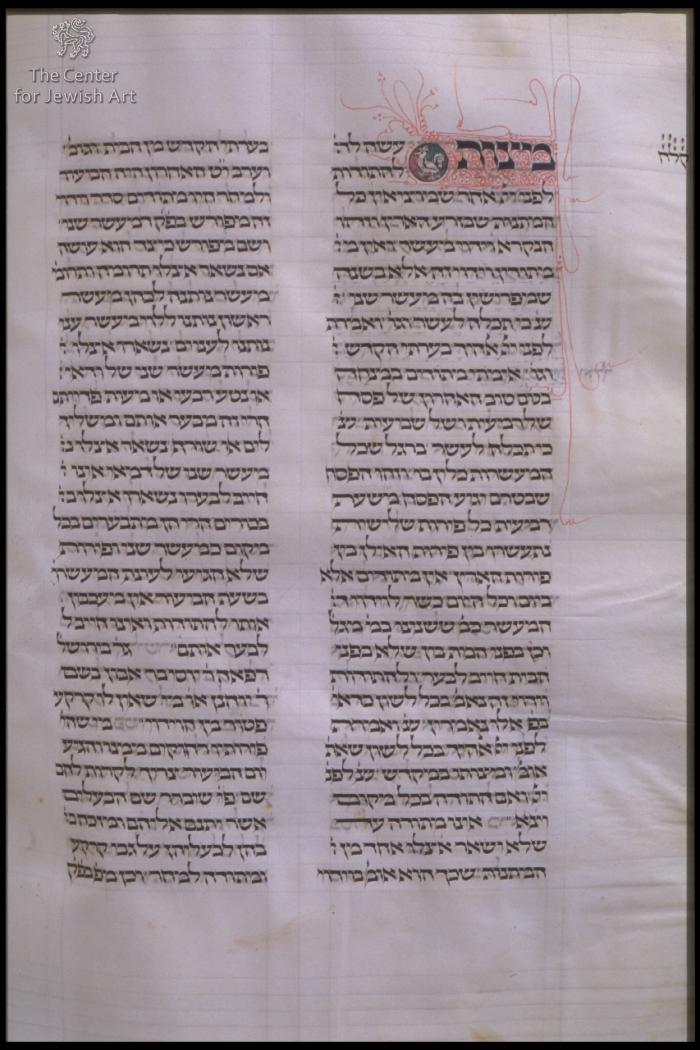 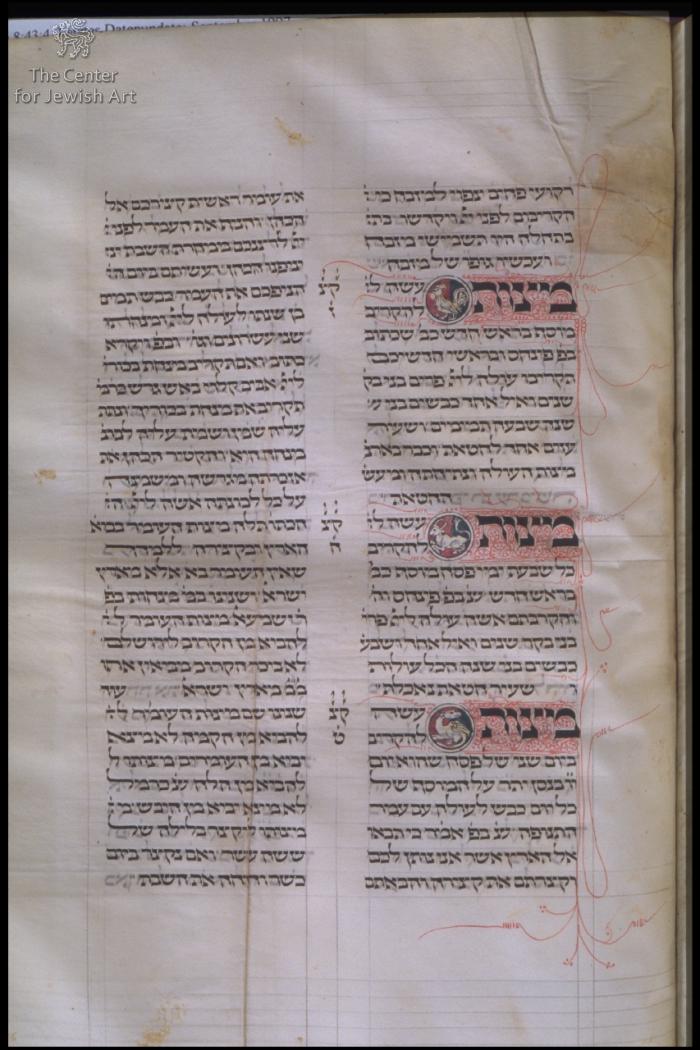 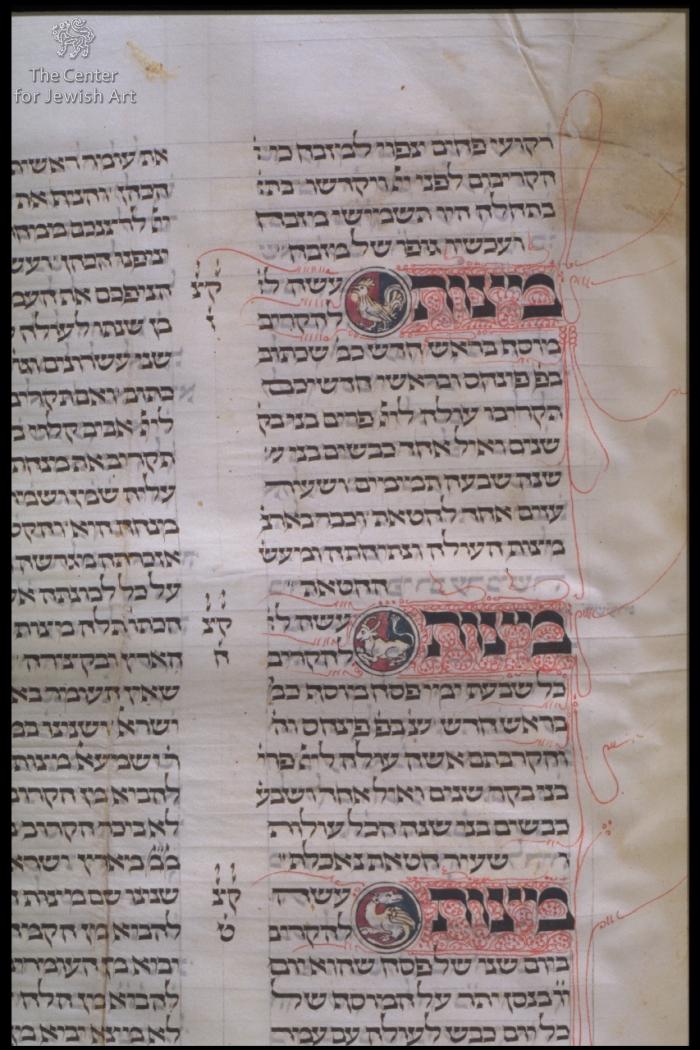 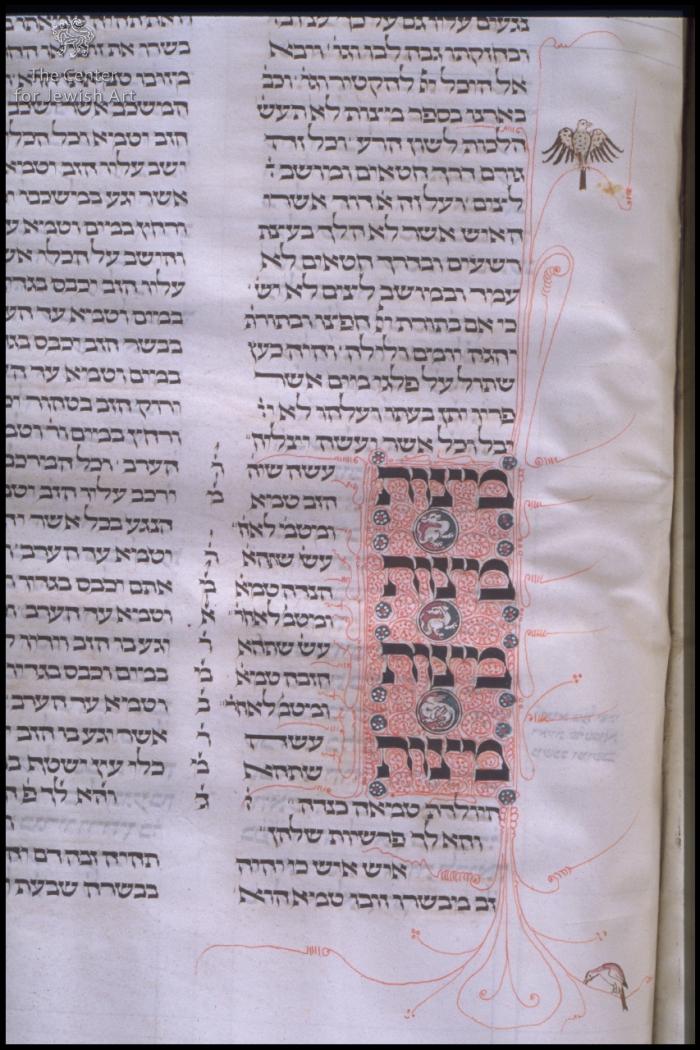 The two top, middle and bottom horizontal lines are ruled across the full width of the page. Additional short horizontal lines of various numbers (applied for proof notes), are ruled by plummet in the outer margins (e.g. vol. I, fol. 280v, vol. II, fols. 532, 541, 555v).

Vols. I and II: Pricking is discernible in the inner margins.

In the first quire (I12): fol. 1 is a section of a single leaf of a Latin Antiphonary of the 14th or 15th century and fol. 3 is single blank leaf. Text after fol. 2 is missing (see contents).

The decoration consists of display initial words within pen-work filigree panels of various sizes executed mainly in red ink. The type of filigree consists of spiral and foliate motifs arranged at times in shaped forms of lozenges or triangles.

The panels are framed by painted borders of double fillet and at times, by bow-shaped bands. The smaller panels are surrounded on all sides by pen-work.

Small medallions are integrated in the filigree field and in the borders of the panels, filled with two-legged animals and hybrids, dragons, animals' heads, human busts, quadrupeds and foliate motifs, all in spared-ground technique on blue and magenta ground.

This Vienna Semag consists of Sefer Mitzvot Gadol (SeMaG), The Great Book of Precepts by Moses ben Jacob of Coucy, a French tosafist and codifier, who lived in the first half of the 13th century. This work, which includes the Positive and Negative Precepts of the Law (finished 1250) served as a standard guide of halakhic practice for scholars in all generations, and many tens of manuscripts of this work survived up to now (Ta-Shma, "Moses … of Coucy", cols. 418-9).

This copy of the ViennaSemag has no colophon stating the name of the scribe, the date or place of production. However, it includes a divorce formula (vol, II, fol. 146v), which includes details probably inserted by the scribe to the original text of the Semag. In this divorce document the year 1344 and the city ofStrasbourg are mentioned and may indicate the time and place of our manuscript (Sed Rajna, "Filigree Ornaments", p. 50).

The style of the illumination also supports the assumption that the manuscript was produced in the Upper Rhinearea. According to Sed Rajna (pp. 46-47), this Semag and other two Hebrew manuscripts similarly decorated attributed to a same workshop of the Upper Rhine School: The Double Mahzor of Vienna and Jerusalem (Vienna, ÖNB, Cod. Hebr. 163; Jerusalem, JNUL, Heb. 80 5214), and theCambridge Hagiographa (Cambridge, UL, Ms Ee 5.9).

The Cambridge Hagiographa has a colophon indicating on fol. 55v the date January 4, 1347 (21 Tevet 5107) and the name of a scribe Hayyim (Sed-Rajna, "Filigree Ornaments",pp. 50 ff.). The Double Mahzor is written by two scribes: scribe A, the original scribe, and scribe B. The original scribe (A) emphasized the name Moshe in both parts of the mahzor and it may well be the scribe's name (see: documentations of theJerusalem part in Index of Jewish Art, Ms.1995.43).

It is interesting to note that the name Moshe is also emphasized in our Semag, although in a different way: the opening page of the Semag (vol. I, fol. I) contains biblical verses in which Moshe is repeated twice in bold script. Since the name of the Semag's author is also Moshe (of Coucy) it is hard to conclude whether it was intended to emphasize the author's or the scribe's name.

However, from the palaeographic examination of these three manuscripts, it seems that each of them is written by a different copyist.

The date 1347 inthe Cambridge Hagiographa and the date 1344 included in our divorce formula are assumed as indication date also for that of the Double Mahzor ofVienna andJerusalem (c. 1344-47; Sed Rajna, p. 50).

The similar decoration of these three manuscripts consists of filigree pen-work panels using mainly red and blue. The panels are adorned with medallions of the same motifs of hybrids, various animals as well as floral and foliate motifs. Some of the medallions are illustrative as in our ViennaSemag (see Decoration Program) or in the Double Mahzor of Vienna and Jerusalem, where the four beasts of Ezekiel’s vision are depicted (JNUL, Heb. 80 5214, fols. 88, 397v). Tendrils extend from all the panels into the margins some of which are embellished with birds in our Vienna Semag (see Decoration Program) or in the Double Mahzor ofVienna andJerusalem (ÖNB, Cod. Hebr. 163, fols. 41, 43).

This kind of decoration is also known from more than forty Latin manuscripts of this same style. According to Ellen J. Beer (oberrheinischen Buchmalerei), this style probably began in the North of France in the thirteenth century in a Cistercian scriptorium and spread through the establishment of daughter monasteries in to the Upper Rhine in the South West of Germany, especially in Freiburg, Basel and Constance at the end of the 13th and the first half of the 14th century.

In Strasbourgwhere, according to the divorce document ViennaSemag was probably copied, and in the neighboring Upper Rhine towns of Basel, Constance and Freiburg, Jewish communities flourished in the first decades of the fourteenth century. Strasbourg received the title of a free imperial city in 1262 from the German king Philip of Swabia, which made it blossom even further from what it was before, and the number of the Jews constantly increased. Most of them were rich moneylenders, and in 1242 they paid the highest tax of all Jewish communities of the empire. Although they suffered from the Rindfleisch Massacre of 1298, the community of Strasbourg became a haven to the Jews expelled from France in 1306. The number of the Jews increased, numbering about 300 families in the first half of the 14th century. The scribe of the Vienna Semag may have been of the emigrants from France to Strasbourg, since he marked the word “and in France” (ובצרפת) on vol. II, fol. 38.

In the 1340s, when the Semag was copied the Jewish community of Strasbourg must have been at the height of its affluence, it were supported by the patricians in the council against the master craftsmen, who owed money to the Jews. Five years later, on February 14th 1349, 2,000 Jews were burned at the stake, in spite of the conviction of the council of Strasbourg, that the Jews were innocent of the accusation of poisoning the wells and causing the Black Death to spread in the city (Ta-Shma, "Moses … of Coucy").

It can concluded that if the date and place of the divorce document was not the actual date of the manuscript, but the scribe copied these details from his model, the manuscript was most likely copied in the Upper Rhine area before 1349 when many communities in this area were destroyed.

In 1545 the ViennaSemag, was sent from the Land of Israel. A century later it reached the Land of Israel again and sent back to Europe in 1637. During the 17th century the owners of the book were the members of the Shalky Wort (שלקי ווערט' או ווערד) family of Polishburg andJerusalem for at least three generations.