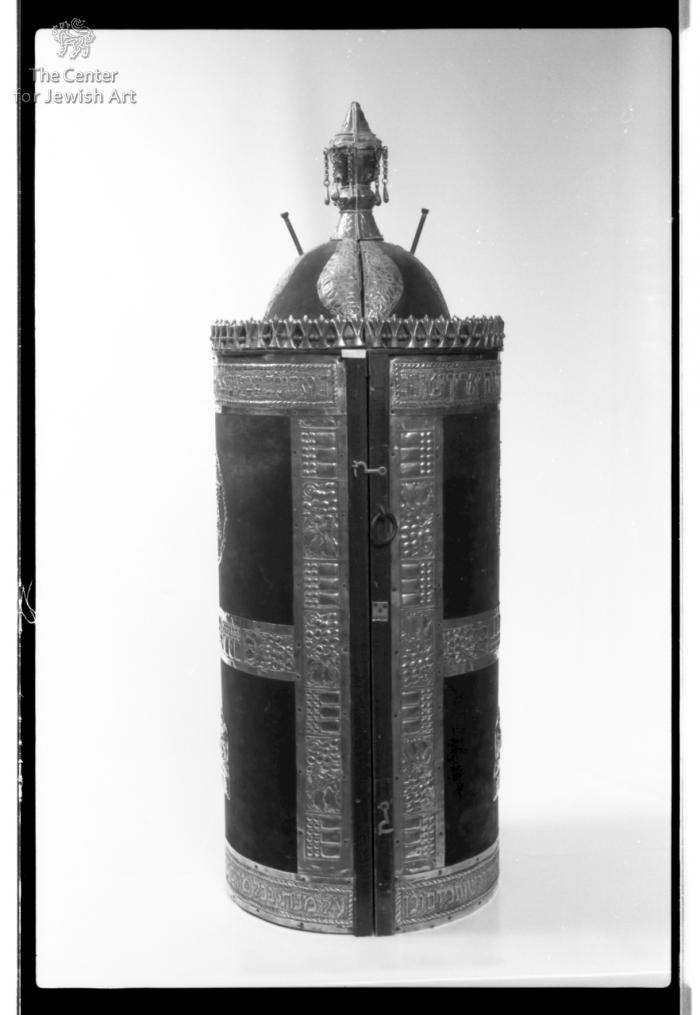 © Center for Jewish Art, Photographer: Radovan, Zev, 1989
The Torah^case is made of wood and consists of a body and a crown. The bodyis cylindrical and covered by blue velvet. Each half of the case is framed by silver friezes. The upper and lower frizes bear a dedicatory inscription. The other friezes are decorated with rectangles alternately depicting geometric patterns and a cluster of grapes. (For a detailed picture, see:Sc.1989.17;2/8) Each half of the case is divided by a horizontal frieze decorated as mentioned above,forming two rectangular surfaces, which depict the same motifs on each half of the case.(For a detailed picture,see:Sc.1989.17;3/8) The upper rectangle depicts a Star^of^David~ inscribed within a circle.In the center of the star is inscribed: ציון !Zion!. On the lower rectangle there is a silver cartouche, depicting a geometric pattern on the base, topped by a six^branched^standing^lamp~,which is flanked by two lions~.On top of the lamp is inscribed: חנוכה !Hanukah!.(For a detailed picture, see:Sc.1989.17;4/8). A lily like crenellation encircles the upper borders. Red plastic beads are threaded into the crenellation. ##The case is closed by two hook clasps. Two pairs of hinges are in the back of the case. The inner face is covered with red velvet. Two round insert holes for the rods are at the top of the case. The dome-shaped crown is composed of a main section, a crest and an apex.## The main section is covered by blue velvet and silver plates, decorated by geometric and floral patterns. The crest is undulating and covered by silver plates, divided into five horizontal bands. The lower band alternately depicts a geometric pattern and lions~. The two central bands depict geometric patterns. On the two upper bands there is a setting of round light blue, red and green stones. The crest is surmounted by a bud-shaped apex. Eleven chains encircle the center of the crest and are carrying flat drop-shaped bells.## Two iron rimon mounts are fixed on the crown.## The dedicatory inscription on the body starts at the upper border from the right of the body. It is repousse in outline letters on a punched background, and reads: תיק זה וסת!)=וספר תורה( עשא אותו הניבד)=הנכבד?( היקר נסים יוסף כוהן הי!ו)=ה' יחיהו וישמרהו( % ואשתו סי')=סניורה( שמחה מב!ת)=מנשים באהל תבורך( ש')=שנת( התשז ה' יאריך ימיהם ! This Torah case and the Torah Scroll inside it was made by the honourable and dear Nisim Joseph Cohen, may the Lord sustain and protect him % and his wife signora Simhah, blessed shall she be above women in the tent (Judg. 5:24), the year 5707 (=1947), may the Lord sustain them for many days.! The inscription continues on the lower border, and reads: על מנת בכל מקום שירצו בעלי הס!ת)=הספר תורה( להוציאו % ולהוליכו למקומות אחרים ומעיר לעיר הרשות בידם ובכ!ך)=ובכוחם( !For the sake of the owners of the Torah Scroll who want to take it out and transfer it to other places and from town to town, the permission is in their hands and their representatives.! 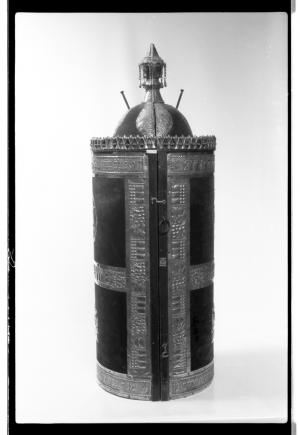 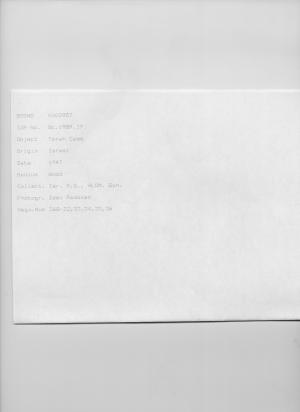 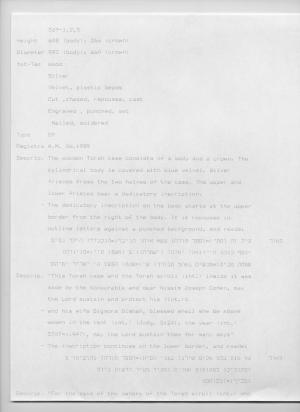 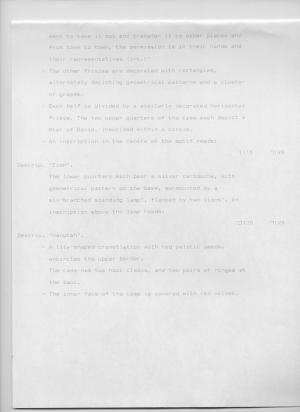 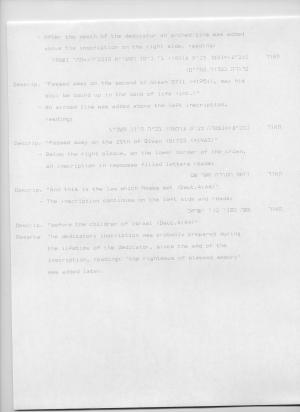 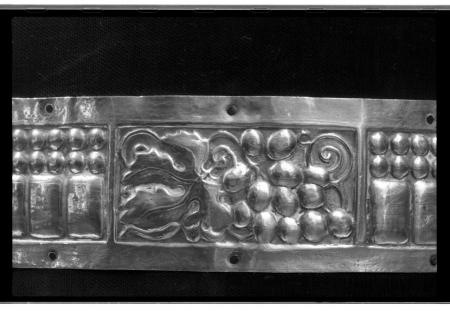 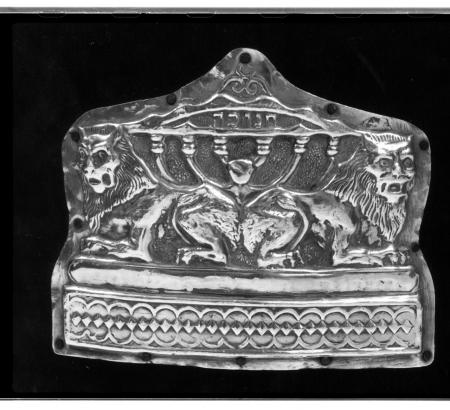 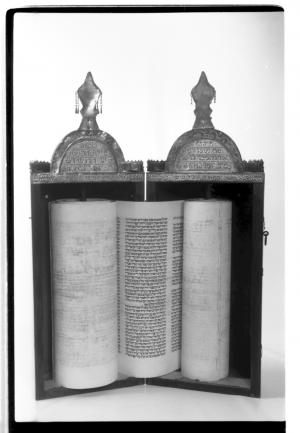 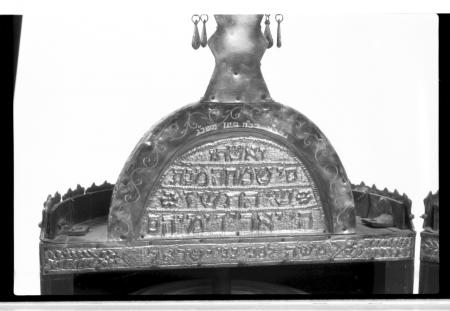 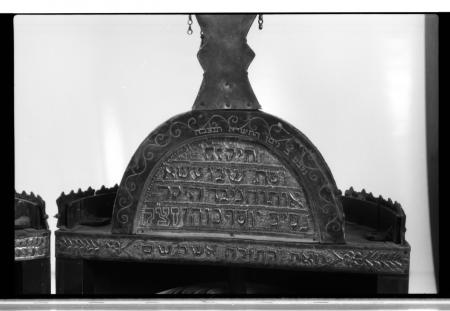 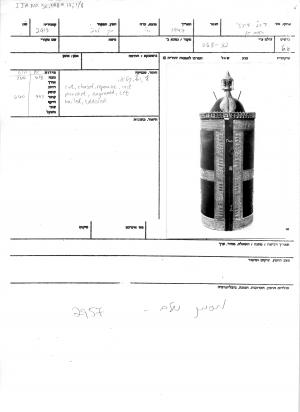 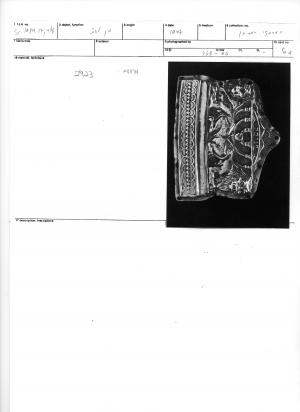