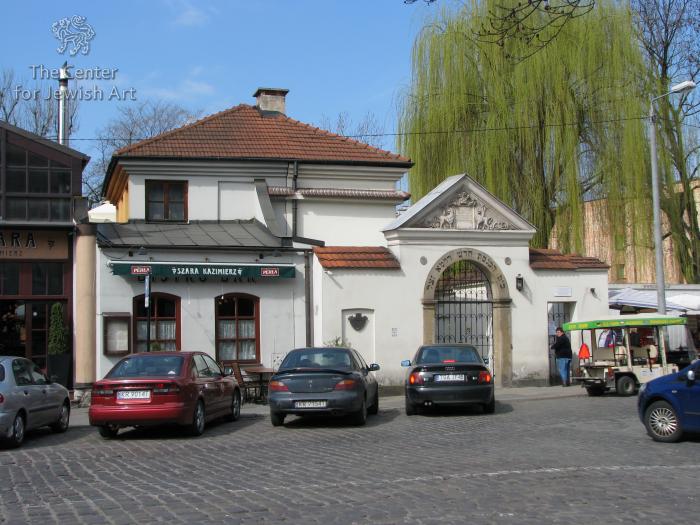 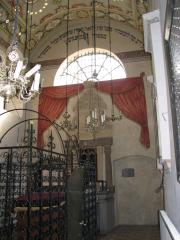 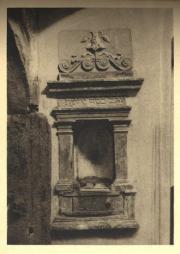 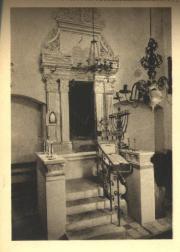 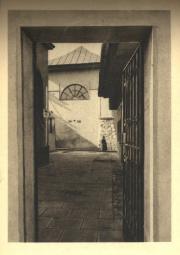 Description (from the Virtual Stetl site):

The Remu Synagogue is located in the Kazimierz district of Kraków, at 40 Szeroka Street, in the inner corner of the Jewish cemetery (registered property no. 217, address before 1939 also 40 Szeroka Street). It is an orthodox synagogue, one of the two synagogues that operate in the city and the only one in which services are held on a regular basis. To the south the building borders on a garden and the backyards of houses on Ciemna Street, and to the north to the backyards of houses on Miodowa Street. The entrance is at 40 Szeroka Street. The courtyard and the cemetery are surrounded by plastered walls of different heights which are partially roofed and tiled. Some parts of the walls were destroyed during World War II. Walls, which had previously been part of  the already demolished houses, were included in the walls at the sides of the courtyard.

The masonry building was done in the Renaissance style. On the interior, in its rectangular vestibule are shelves for prayer books and other types of books, and there is a built-in Yorzeit plaque on the northern wall which commemorates the deaths of the congregation’s members from the 1930s to the 1990s. Another plaque is placed on the south wall of the main prayer hall. These plaques are divided into tens or hundreds of sections which include personal details and times of death. There is a light bulb installed by each of the inscriptions which is lit on the anniversary of the death of an individual person. The entrance to the main prayer hall leads through a sandstone portal with a wrought iron door. On the side is an original stone money collection box from the second half of the 16th century with a Hebrew inscription reading: “gold, silver, copper” calling for contributions and alms and another inscription, which in fact is an invocation honoring the memory of the Rema and which reads “An offering for the peace of the soul of the Rema of blessed memory.”

In the rectangular one-nave barrel-vaulted main prayer hall there is both original and partly reconstructed liturgical equipment. The original Aron ha-Kodesh representing the late Renaissance style made in the second half of the 16th century is placed on the east wall. The niche is closed with an Art Nouveau open-work door and is screened with a parokhet adorned with a valance. The frame around the Aron ha-Kodesh has been made of sandstone and has double pilasters on both sides. The pilasters’ capitals showing plant decorations support full rustic work with a frieze filled with Hebrew inscriptions which read “Look down from Your holy dwelling, from the heavens, and bless Your people Israel” (Deut.26:15) and “Kings reign with me” (Prov. 8:15). The cantor’s pulpit which stood by the Aron ha-Kodesh, the stairs and a ner tamid on the left side were all reconstructed after World War II.

To the right of the Aron ha-Kodesh is a special chair that is never occupied. As the legend has it, it was Rabbi Remuh’s place of prayer and remains free as a sign of respect. Above the chair is a plaque, built-in and engraved in stone, reading “The tradition says that the Remuh, the righteous of blessed memory, stood in this place to pray and confess before the Holy One, blessed be He” 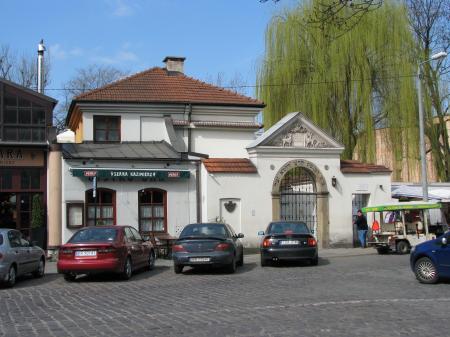