The synagogue was designed by Valerii Rybarskii in 1899; apparently it was called Hakhnasat Orḥim Synagogue. According to one testimony, “the synagogue was situated on a side street; the interior was decorated in good taste; most of the parishioners were craftsmen. In the vestibule [polish] there was a sleeping place for beggars, who came to Marijampolė from the surrounding vicinity.” The synagogue’s decoration is very similar to that of the beit midrash and combines Neo-Romanesque, Neo-Gothic, and oriental decorative motifs. They are typical of the architectural vocabulary of Rybarskii, as expressed in his church designs.

The building consists of two parts of different height: a lofty two-storey western narthex and a lower prayer hall with a yet lower apse in the east. It is built of brick, and plastered; the narthex and prayer hall are covered with tile gable roofs, while the apse is covered with a pavilion tin roof. The main entrance is in the center of the western façade. The narthex included a vestibule and auxiliary premises on the ground floor and a women’s section above. The western façade facing Butlerienės Street is symmetrical with a plastered socle and a triangular gable. Four stepped buttresses terminating with pediments divide the façade into three bays. The corner buttresses exceed the height of the roof. The upper tier of each buttress is decorated with a horseshoe-headed depressed panel. The central bay includes a rectangular doorway with a horizontal panel above it, a coupled lancet window on the first floor, a blind round-headed arcade bridging between the buttresses, and the Tablets of the Law topped with the Torah crown in relief on the gable apex. The sides of the gable have a round window each. The lateral bays of the façade include rectangular windows on the ground floor and pointed windows on the first floor, originally in a common molding frame. Four moulded paterae are situated between the two floors. A stringcourse with a Lombardian band crowns the first floor. The southern façade of the narthex is decorated similarly to the western one: it is flanked by buttresses with horseshoe-headed depressed panels and has three rectangular windows on the ground floor and three pointed windows on the first floor, with molded paterae. The southern façade of the prayer hall contains four pointed windows; its socle is pierced with four rectangular basement windows and it is crowned with a frieze and molded cornice. On its eastern corner there is a buttress-like lesene. The northern façade is partly obscured by an adjacent building, which includes the staircase to the first floor. The exposed part matching the prayer hall contains three pointed windows, and is crowned with a molded cornice. The eastern façade is symmetrical, with a central semicircular apse. The corners of the façade are emphasized by low buttresses; it is surmounted by a gable, which terminates in a corbelled pier. There are two blind pointed windows on either side of the apse and two blind rectangular windows in the gable. The sides of the apse are pierced with two lateral lancet windows and a central oculus and crowned with a molded cornice.

The prayer hall was almost square, with twelve pointed windows – four in each of the southern, eastern and northern walls. In the west a central entrance, two stoves and bookcases were situated in the lower tier, while the upper one contained a strip window with balusters, connecting the women’s section with the prayer hall. The square bimah was located in the center of the hall. Four slender columns, with a balustrade belowand decorative grill-work atop, stood on its corners. A semicircular apse, where the Torah ark was located, projects from the middle part of the eastern wall. It has a central oculus and two small lancet windows on the sides. The hall was spanned by a nine-bay coffered ceiling.

In 1945 the building was converted into a storage place of recyclable waste. Its interior was destroyed, a new ceiling built, and the windows were bricked up. It was reconstructed in 1985, and the window openings were revealed. In 1999–2000 the foundations were insulated, the plaster of the façades was renovated and the roof and rain gutters were fixed. The former prayer hall was spanned by a new construction of plywood trusses with a planked ceiling above. Other new interior elements include the vaulted ceiling of the vestibule and the balcony on the western wall of the former prayer hall. The arch connecting the hall with the apse received a cusped trefoil head; it is flanked by two pilasters with sunken panels, which echo the exterior buttresses. In 2007 the building housed the Marijampolė District Educational Center. 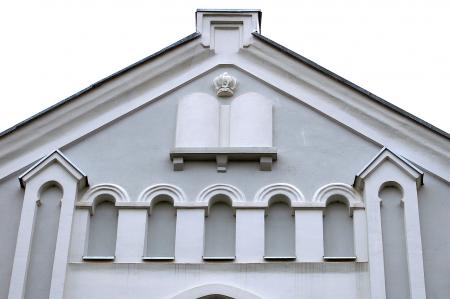 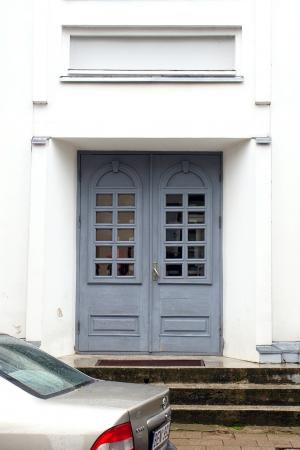 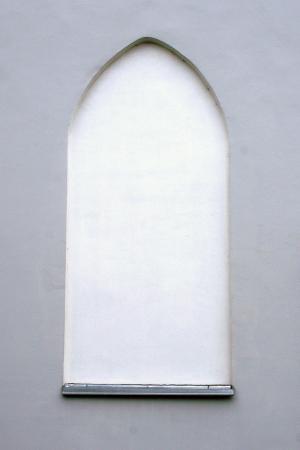 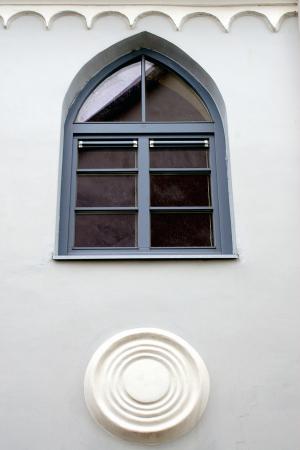 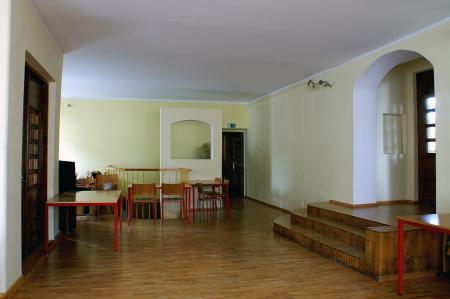 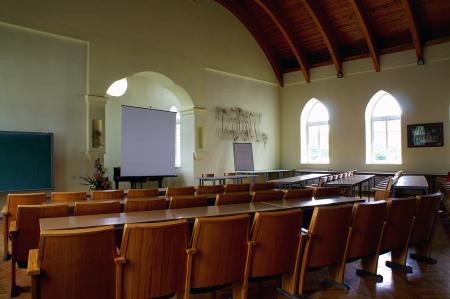 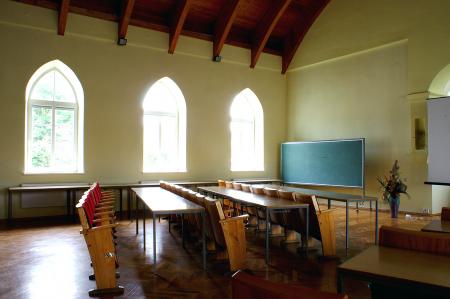 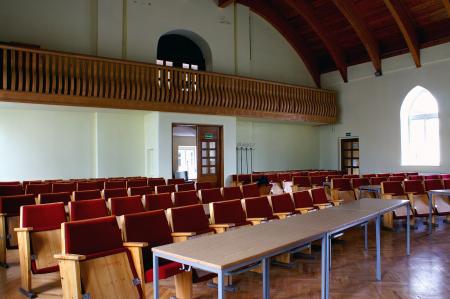 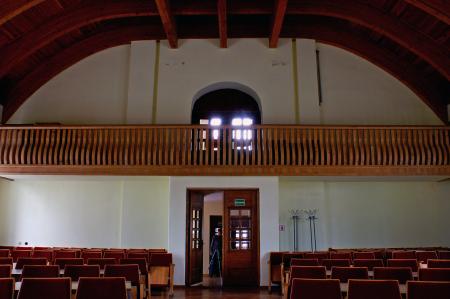 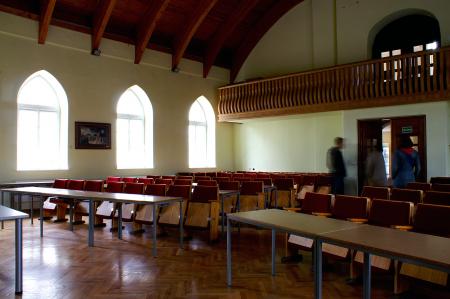 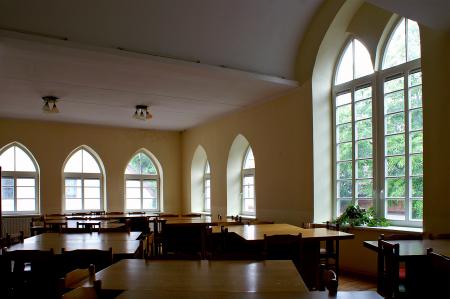 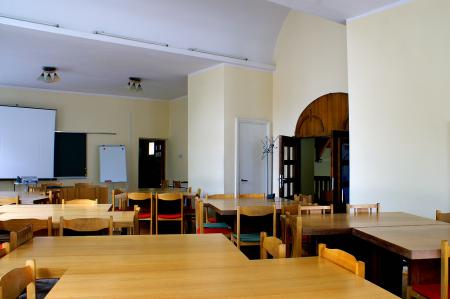 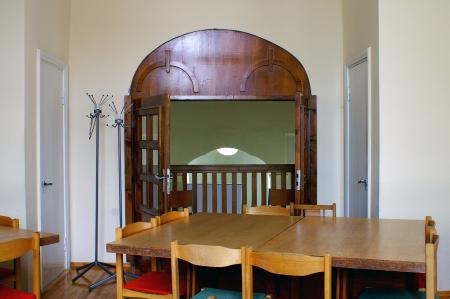 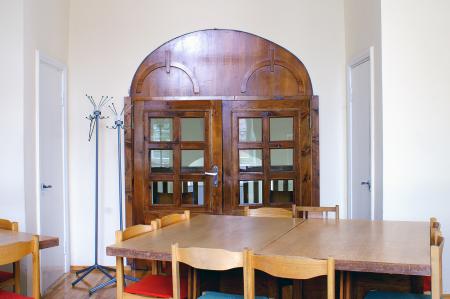