Synagogue and Beit Midrash in Lazdijai, Lithuania - photos of 2017

The synagogue and beit midrash formed a shulhoyf, which included also a rabbi’s house and a Jewish school. The shulhoyf is located in the old center of Lazdijai at the intersection of the town’s main east-west axis – Vilnius Street and Senamiesčio Alley. The Raišupis River is to the west, and the Church of St. Anne stands about 400 meters to the northwest. The synagogue and the beit midrash were considerably damaged during bomb raids at the end of WWII, but they appear on the Lazdijai plan from 1946.11 In the 1950s the remnants of both structures were completely reconstructed and united into one building, which functioned as a palace of culture and a public library.

According to a seminar paper on the synagogue written by an unknown student at the Vytautas Magnus University in the early 1930s, the beit midrash (called synagogue throughout the paper; herein the names of the two buildings are distinguished) was builtby Jewish masons in the 1830s after a design by a resident of Lazdijai, named Ochronas. The paper includes a legend, which tells that the building site for the beit midrash was chosen by a holy man from Vilnius who came to Lazdijai to visit another holy man named Aleksander Ziskind. The student describes the structure on Staro Street, lined with wooden houses, as a large old brick synagogue, whose windows have no shutters. This impression corresponds to a photograph from about 1937. The synagogue had a prayer hall with tall round-headed windows and was covered by a gable roof. In 1938 permission was given to cover the roof with tin, but due to lack of means the works were not carried out. The situation plan shows that the building was oriented towards southeast.

Stasys Kryžiokas, who supervised the construction works of the palace of culture, asserts that in 1953–58 the synagogue stood roofless, its cracked walls devoid of doors and windows. He also recalled that the walls were made of red brick with boulder inserts, and did not allow cutting new openings. It was therefore decided to pull down the walls and erect the palace of culture on the existing fortified foundations. The high socle, used due to the sloping terrain, is the only surviving remnant of the former synagogue. The beit midrash is also oriented towards southeast.

Its appearance is known from the student’s description as well as from the plan, produced probably in the 19th century in order to assist in the selling of seats, and inscribed תבנית בית המדרש דפה לאזדייא עזרת אנשים (The form of the local beit midrash, here Lazdijai / Men’s section). According to the student’s description, the two-storey brick building was whitewashed and covered with a tin roof painted in red. On its western side were two small prayer rooms, and the middle room was used for storage. A corridor running from north to south separated these rooms from the eastern prayer hall. There were two large stoves and bookcases full of Talmud books on the western wall of the prayer hall. The upper part of the western wall had paintings of the Tomb of Rachel on the right and the Tomb of Abraham on the left; there was another Biblical image with a verse from Psalms referring to respect for the house of God under it. The author of the paintings was a Jew from Kaunas; however, in the 1930s his name was lost. The walls were decorated with wooden carvings, which in the student’s opinion resembled those used to decorate private houses. The ceiling was white, except for the hanging points of the brass chandeliers, which were decorated with flowers. Huge chandeliers, weighing in total about 25 Russian poods (ca. 400 kg), hung in front of the Torah ark. These chandeliers were decorated with stars and a large heavy ball hung underneath. During WWI Germans plundered the chandeliers, which in the 1930s were replaced by electric bulbs.

The painted wooden Torah ark was situated in an apse with a semicircular window above it. It was accessed by a flight of stairs, with carved handrails. A parochet bearing two Stars of David was used on weekdays, and a curtain with lions embroidered in gold was used on holidays. Close to the ark stood the amud topped with tin lions, between which candlesticks were installed. In the lower part of the amud, prayer books were kept. The bimah was situated between four pillars that reached the ceiling and was accessed by stairs from the southern and northern sides. The bimah was surrounded by a parapet and covered by a blue cupola resting on a beautifully carved trabeation. The table for the Torah reading was covered with a fringed cloth. Both the bimah and the Torah ark were made by a local carpenter named Samuel. The women’s section was situated above the three rooms in the western part. Its eastern wall had semicircular windows that were opened during the prayer to hear the cantor. This description is verified by the beit midrash’s seating plan with the wall elevations. The plan shows a rectangular building, divided by a corridor into the southeastern prayer hall and three rooms on the northwest. The main entrance to the building is on the southwestern façade and leads to the corridor. The prayer hall is almost square, with sixteen windows: five on each side wall and two groups of three windows on the southeastern one, flanking the Torah ark. The ark is shown as a closet; a semicircular window pierces the wall above it. The bimah is placed in the middle, slightly shifted to the west, so that the reading table is situated in the geometrical center of the hall. The bimah was accessed by two flights of stairs. The entrance to the hall is in the center of the western wall. On the same wall were two stoves. The 121 seats are arranged along the walls (except the western wall), along the eastern side of the bimah and in clusters facing the ark on either side of the bimah. Two long tables with benches, intended for religious study, are shown near the western wall. Permission to build a new roof for the beit midrash was received in 1938, and during the following year the roof was indeed tinned. Ipolitas J. Plūkys, resident of Lazdijai since 1941, recalls that the beit midrash was painted blue. According to Kryžiokas, in 1953–58 its walls were infested by fungus; a rusty tin roof bore shrapnel marks. During the renovation works the foundations were fortified, and the walls were pulled down to the bottom level of the openings, so that no authentic elements of the original architecture survive. 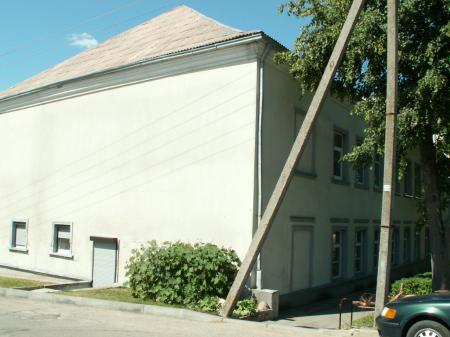 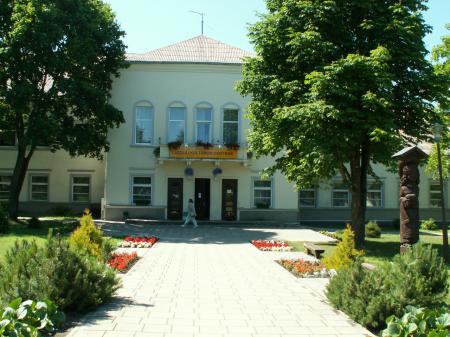 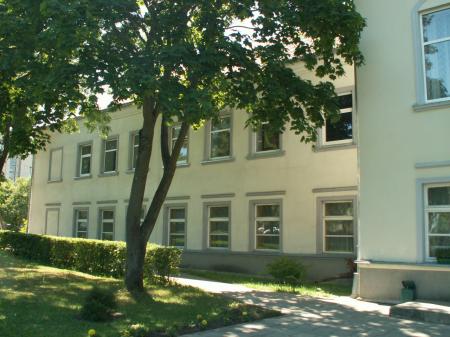 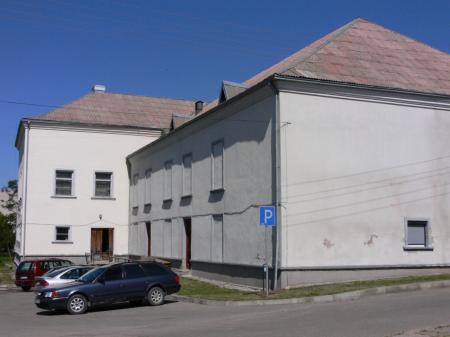 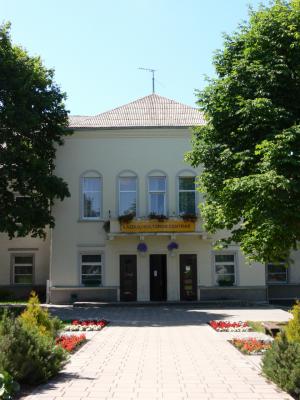 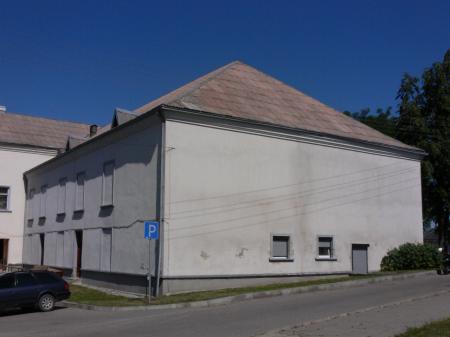 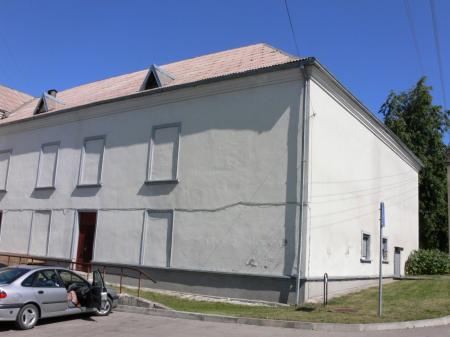 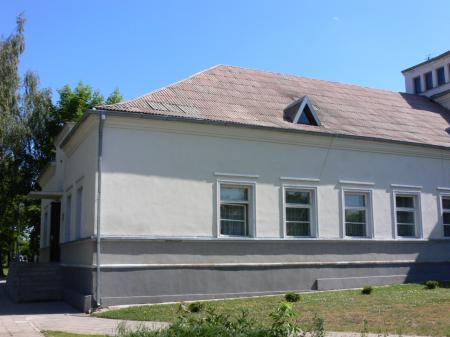 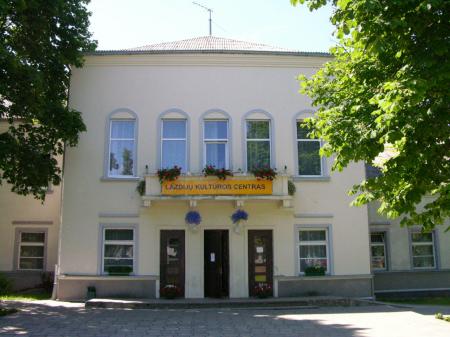 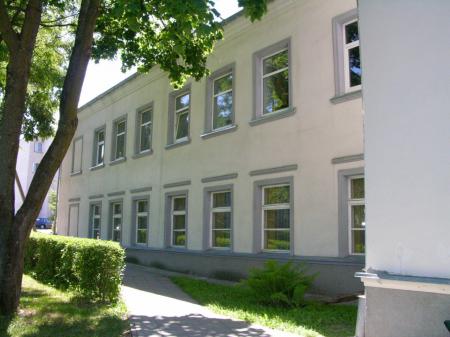