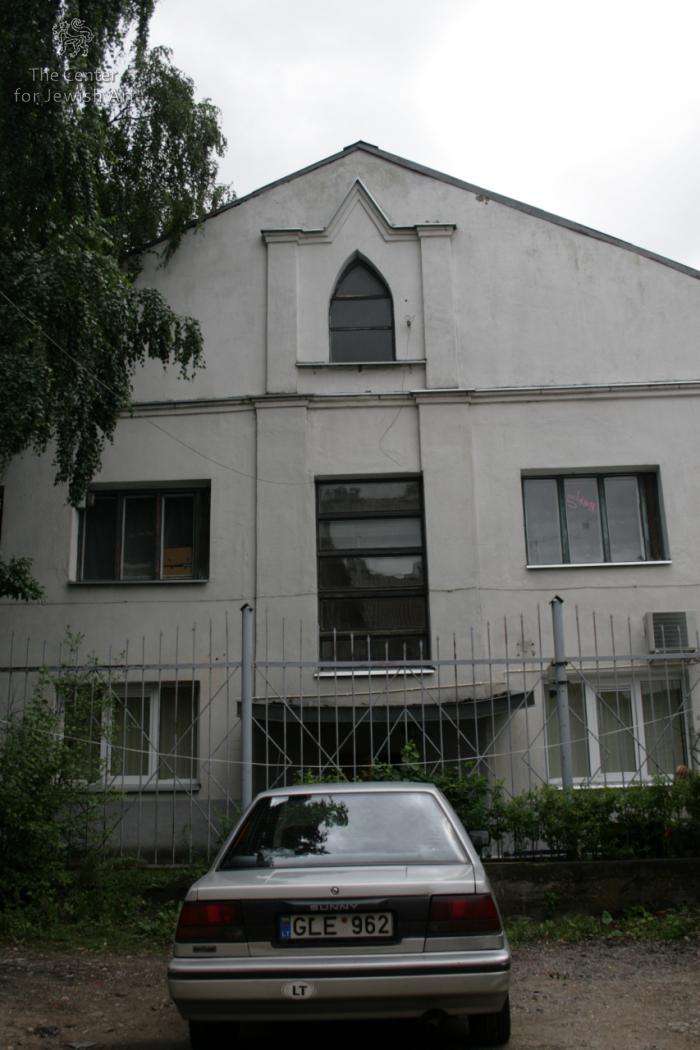 The Naḥalat Israel (Heritage of Israel) Kloyz stands in the middle of the block created by Gedimino, Kęstučio, Vaidilutės and Miško Streets, in the New Town. It was built before 1866 and probably damaged during WWI. In 1922 technician Leonas Markovičius prepared a design for the renovation of the kloyz and rebuilding of its upper part. The renovation was carried out with significant changes. In 1936 technician A. Šusteris designed a brick lavatory building, and a brick warehouse nearby two years later. In the summer of 1940 the congregation obtained permission to build an annex on the southern side after a design by technician Juozas Gudelis.

According to the 1922 design, the kloyz was based on a rectangular ground plan with an apse for the Torah ark on its eastern side. The prayer hall in the east was preceded by a two-storey part in the west with a narrow vestibule in the middle, flanked by two rooms with stoves. The women’s section above them was reached by two flights of stairs along the western façade that were accessed through doorways from the northern and southern sides.

The prayer hall with a slightly longer transverse axis was lit by fourteen pointed windows decorated by glazed Stars of David; a small oculus was situated in the apse. Contrary to the design, which shows metal columns, four masonry columns with simple capitals framed the bimah in the center of the hall, thereby forming a nine-bay layout. The Torah ark was situated in the eastern apse accentuated by a trefoil arch. According to the design, stoves were situated on both sides of the main entrance against the western wall. The women’s section was connected to the prayer hall by thirteen pointed openings arranged in groups of three in the center and five on each side.

The plastered façades were decorated by rusticated lesenes, applied to the corners of the building, to the longitudinal façade as a separation of the prayer hall from the two-storey part, and to the western façade stressing the central bay with the main entrance. Drawings by Gudelis from 1940 show that the façades were not carried out exactly according to Markovičius’s design. The western façade was two-storey, with rectangular windows on the ground floor and pointed windows on the first floor. The gable was decorated by a pointed window with a sharp triangular pediment resting on two lesenes – a form typical of 1920s Expressionism (Art Deco) that is still intact. The two oculi on the sides of the pediment are blocked today. Gudelis’s plans also indicate a staircase with a gallery in front of the façade, obviously an outer entrance to the women’s section, which might indicate that the planned interior staircases were not realized. The lateral façades had four large pointed windows in the prayer hall and three smaller ones on the first floor of the two-storey part. The eastern façade had a semicircular apse reaching about two-thirds of the height of the walls, flanked by three windows on either side.

A one-storey annex was attached to the western part of the southern façade in 1940.

Although the 1922 design for the kloyz employed a stylistic vocabulary of modest Historicism, the realized project made use of Expressionism (Art Deco) at least on the entrance façade.

Today (2007) the façades and interior of the former kloyz have changed, but the original form is still perceptible. The interior into two floors. All pointed windows, except for one in the western gable, were replaced by rectangular ones. The eastern façade has preserved the apse, but acquired rectangular windows in two registers. A low annex is added on the northern side of the façade, and a metal staircase is installed on its southern side. In the interior, the apse, accentuated by a trefoil arch, still exists on the present-day first floor. The four columns and the original ceiling divided into nine rectangular fields with chamfered corners imitating coffers have survived as well. Today (2007), the former Naḥalat Israel Kloyz houses offices, among them those of the Kaunas Jewish Community. 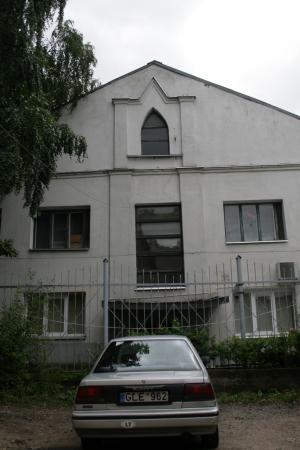 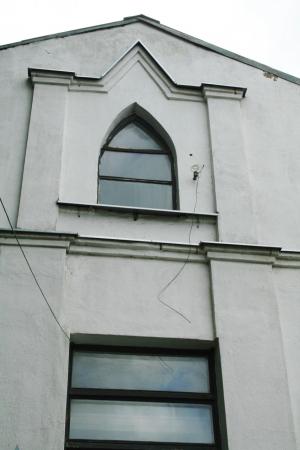 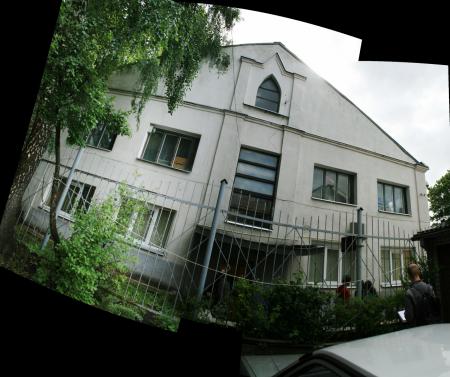 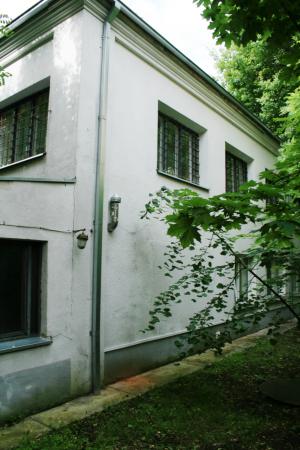 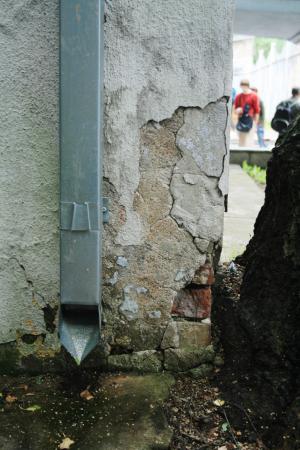 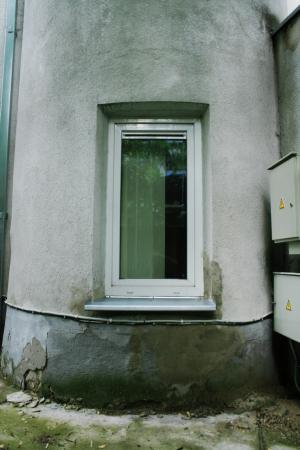 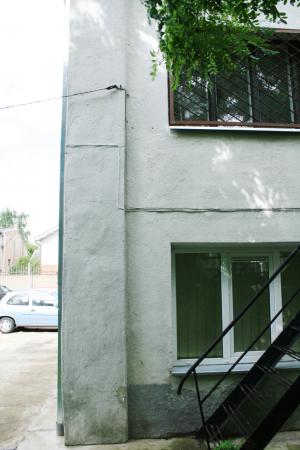 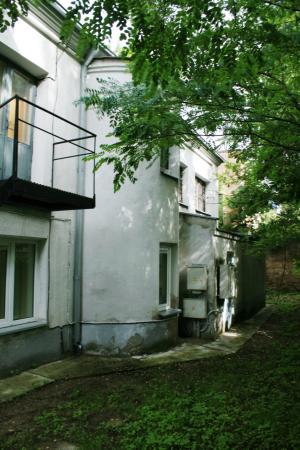 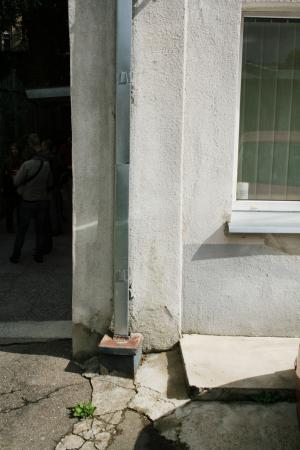 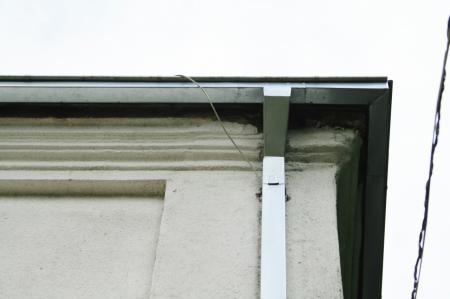