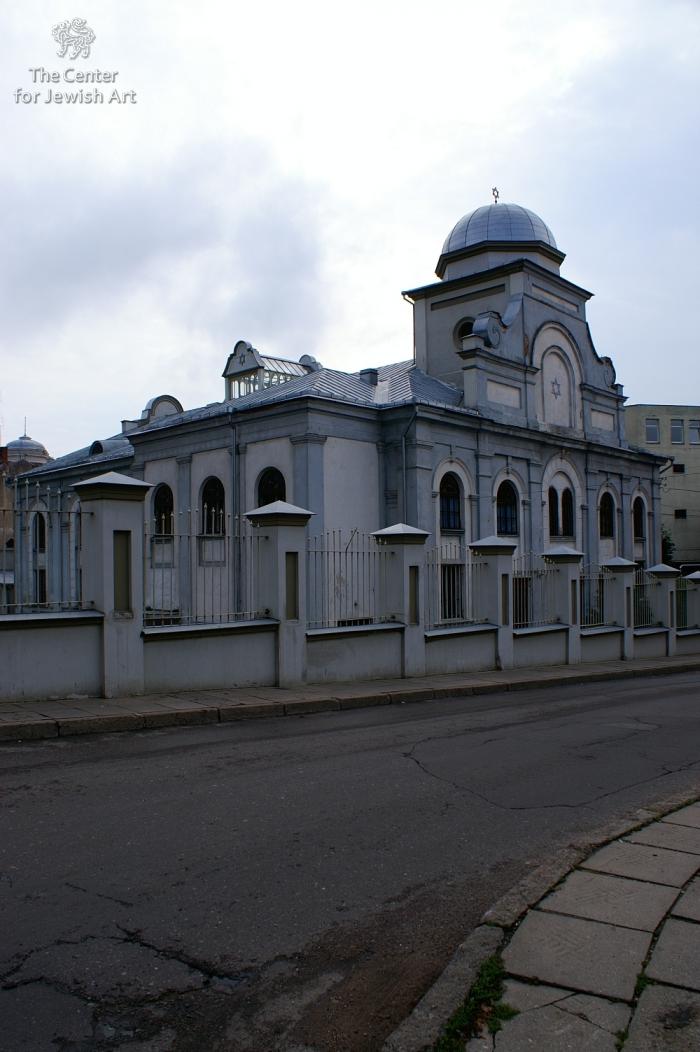 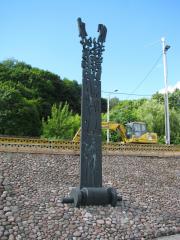 The Ohel Yaakov (Tent of Jacob) Synagogue was erected on a plot bordered by streets on three sides: Ožeškienės Street in the southeast, Jeruzalės Lane in the southwest and Savanorių Avenue in the northwest. Thus the building has three façades visible from the street, and the roof with a tower crowned by a cupola can be seen from a distance.

On July 17, 1872, merchant Levin Barukh Minkovskii received permission for building a synagogue. In addition, an auxiliary wooden building was planned to be built in the synagogue courtyard on the side of formerSt. Petersburg Road(today Savanorių Avenue). Although the synagogue’s design is not signed, its architectural vocabulary allows it to be ascribed to Iustin N. Golinevich. The construction works were supervised by the architect of the Kaunas Province, Edmund von Mikwitz.

108 In 1873 Minkovskii presented the plot with the partly built synagogue to the Ohel Yaakov congregation and the plot became the property of the synagogue community in 1883. In 1893 a brick fence with a gate was built according to the design by engineer Piotr M. Dorofeevskii (renovated in 1999). In 1924 a protrusion instead of the northeastern apse was built, comprising a choir gallery on the first floor and a staircase leading to it. In 1937 a design for a staircase annex to be added at the northwestern façade was drawn up. However, a year later an annex of a different form was built.

The building was damaged during WWII. In all likelihood, it was then when the synagogue lost its cupola, which was restored in 2001.

The plastered brick synagogue is based on a rectangular ground plan with a staircase annex on its western side and a protrusion in the center of the northeastern façade. A tower-like structure with a cupola rises above the southwestern entrance façade and the hipped roof. The synagogue’s architecture combined a Neo-Baroque division of façades, Neo-Renaissance windows and a Neo-Moorish onion dome. The building is oriented towards northeast in order to align its side façade with Ožeškienės Street. Currently the synagogue is painted in blue and white.

Pilasters divide the side façades into seven bays, and the main and back façades into five bays. The pilasters reach the cornice running along the building at the top of the façades. The bays are decorated by round-headed arches on impost moldings; the arches are framed by rusticated archivolts and keystones. The arches comprise tall round-headed windows of so-called Venetian type, which shed light both on the ground floor and on the first floor women’ss gallery.

On the southwestern entrance façade the central bay with the main doorway is broader, and therefore the upper cornice is broken to accommodate the higher arch with a biforium. The main doorway is flanked by two lateral ones. The recently made doors are decorated with relief carvings. The façade has a high pediment with Baroque-like side volutes rising above the cornice. Behind the pediment a tower rises above the roof; originally it was topped by an onion dome, which was destroyed during WWII and replaced with a spherical cupola with a Star of David on its top in 2001. Another Star of David is inserted into the blind round-headed arch in the center of the pediment. Remnants of a painted Star of David and a Hebrew inscription reading כי ביתי בית תפילה יקרא לכל העמים (“for my house shall be called a house of prayer for all people,” Is. 56:7) are visible above the central entrance door; two smaller Stars of David are painted above the lateral doors.

The opposite, northeastern façade is crowned by a scalloped pediment. Originally, it had a polygonal apse, containing the Torah ark in the interior, which was replaced in 1924 by a rectangular protrusion with its own gable roof. It reaches the height of the façade, so that the cornice is continued on its surface; its sides are decorated similarly to the façades but without archivolts. The northeastern side of the protrusion is blank and not plastered, since it is situated on the border of the synagogue’s plot. On the side of the northwestern façade a projecting annex built in 1938 contains a staircase leading to the women’s gallery; its façade is subdivided into three bays.

A small skylight is situated in the middle of the roof of the prayer hall. It has two small scalloped gables, resembling that of the northeastern façade, decorated with a Star of David. The skylight gives light to the prayer hall not only through its twin round-headed windows, reminiscent of the Tablets of the Law, but also through its glass roof. It is not clear when the skylight was built: it is not shown on the original design from 1872; a drawing of the interior from 1924 shows a skylight in the ceiling of the prayer hall, but of a different shape; that of the present skylight points to its relatively recent origins.

The interior consists of a two-storey southwestern part with vestibule and staircases, and an elongated prayer hall with women’s galleries on three sides. The galleries rest on two rows of pillars, decorated with sunken panels, which divide the hall into a central nave and side aisles. The flat ceiling of the nave, divided by rectangular coffers, is slightly higher than the ceilings of the aisles. The walls have wooden panels in their lower register.

On the northeastern wall, the Torah ark preceded by a ciborium is situated in a deep apse with a small gallery for the choir in its upper tier. The apse is decorated in the Neo-Moorish style with wooden columns and arches borrowed from theAlhambrapalace. This arrangement is an almost exact but reduced copy of the Torah ark apse in the New Synagogue on Oranienburger Straße inBerlin, built in 1866–69. The original octagonal bimah, which was situated near the Torah ark, has been moved to the center of the prayer hall. Light blue, white and brown have been used for the interior décor; and blue, yellow and red prevail in the stained glass windows. The original long pews with high backs are partially preserved. 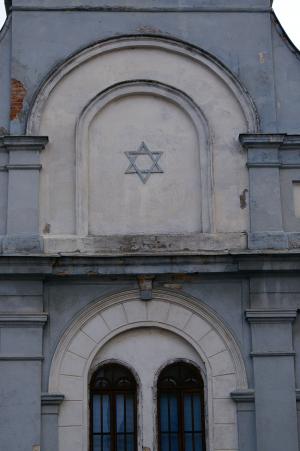 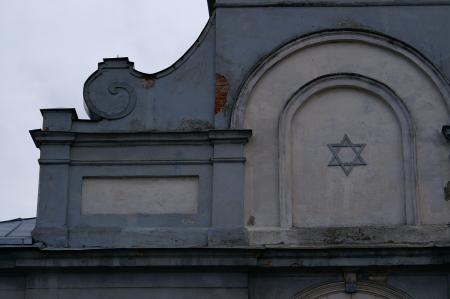 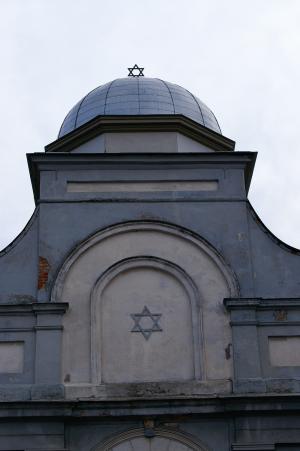 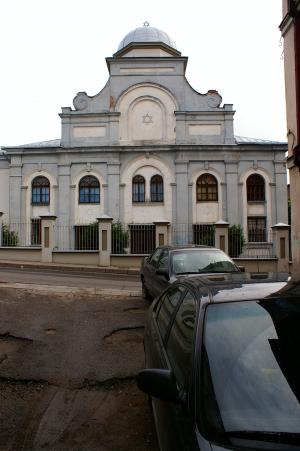 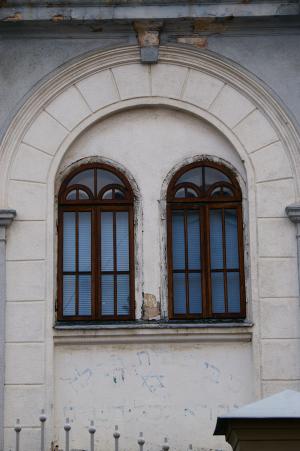