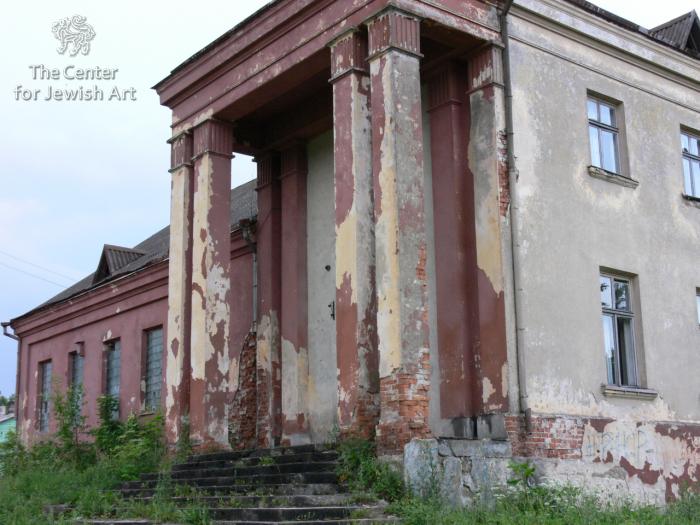 The synagogue was designed in 1927 by civil engineer Leonavičius. According to his design, the building, covered by a saddle roof, consisted of a prayer hall on the southeastern side and a northwestern part with a staircase annex in the northern corner. The northwestern part included a narrow vestibule flanked by a small room on the northern side and a larger one with a separate entrance on the southern side. The women’s section on the first floor was reached by the annexed staircase. The prayer hall could be entered either through the vestibule or directly from the northeastern façade. It was lit by fourteen pointed arch windows. Four columns enclosed the bimah in its center. The Torah ark was placed in front of the central bay of the southeastern wall, flanked by three windows on each side. All rooms on the ground floor were provided with stoves. Seven, presumably rectangular, openings connected the women’s section with the prayer hall. The synagogue’s exterior corresponded to the interior division. Pilasters stressed the corners of the building and marked the division between the prayer hall and the northwestern part, which had simple segment-headed windows in both tiers. The façades of the prayer hall were richly decorated and their pointed arch windows had bent pediments supported by small consoles. The adjoining pediments grouped the windows to form a kind of arcade. The northwestern entrance façade had a triangular gable. Its higher central part was framed by thin pilasters enclosing a Star of David and biforia blind arches symbolizing the Tablets of the Law. Small semicircular windows pierced both sides of the gable. On the ground floor there were two doorways topped by small Stars of David and bent pediments with flanking windows.

The women’s section on the first floor was lit by a row of six small windows on this façade and another two on the northeastern one. The corresponding southeastern façade does not appear on the design. Judging from the floor plan, it had a broader pier in the center, flanked by two groups of three pointed arch windows. It is likely that the gable was decorated like the western one.

In 1955–57 the structure and architecture of the synagogue changed completely when it was turned into a house of culture. The building was extended by a two-storey annex in the northwest and lower annexes in the southwest. Only fragments of the former façades and the transverse inner wall survived. The southeastern façade preserved its gable with a blind tympanum; the former pilasters were reduced to corner lesenes. A rectangular doorway was cut through the Torah ark niche. On the northern façade, the windows of the former prayer hall were made rectangular and blocked with glass bricks. The annex on the northwestern side received a monumental portico with two pairs of pillars in Stalinist Neo-Classicism, which dominates the entire building. The northwestern and southwestern sides of the former synagogue are concealed completely by the two-storey annexes.

A plaque with a Lithuanian inscription reads: “The synagogue, led by the famous rabbi of the Lithuanian Jews, Nochum Sher, operated until June 22, 1941.” 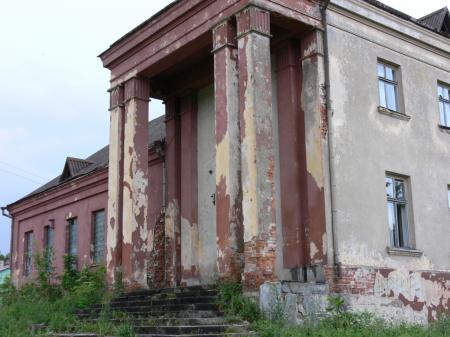 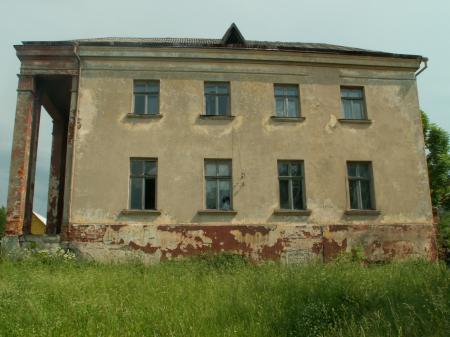 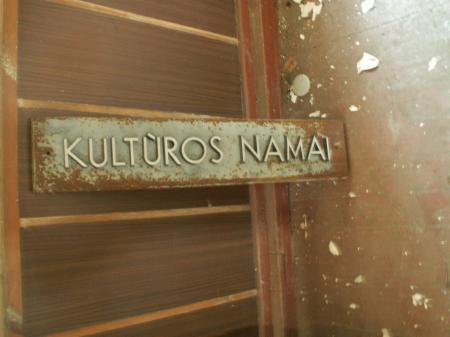 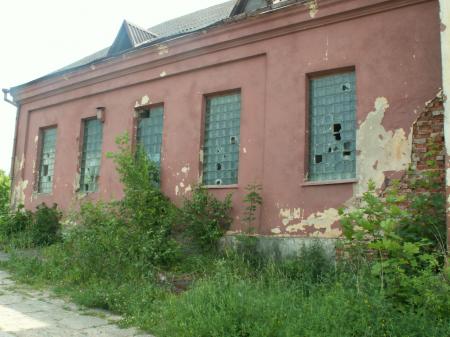 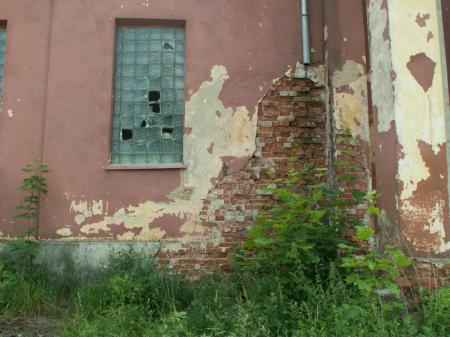 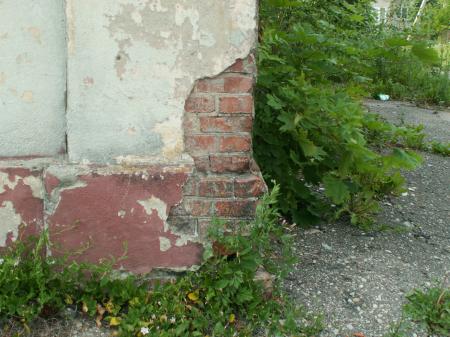 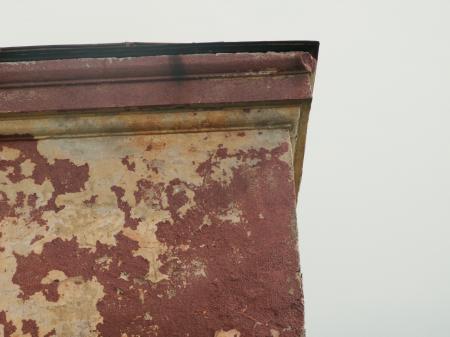 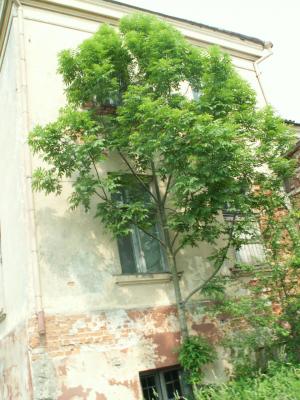 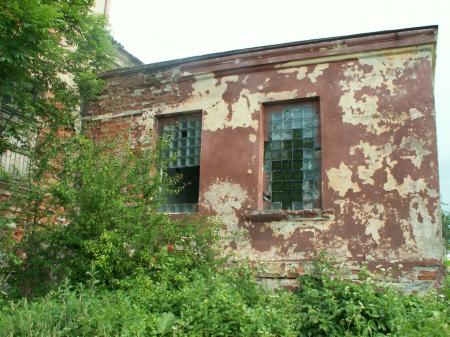 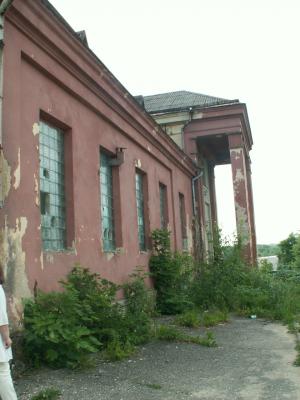 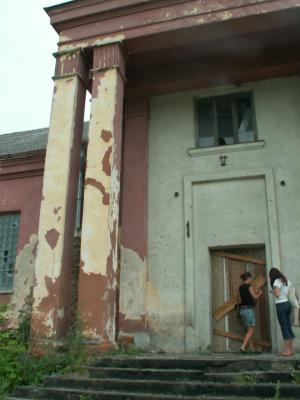 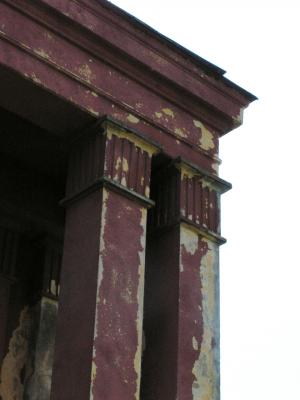 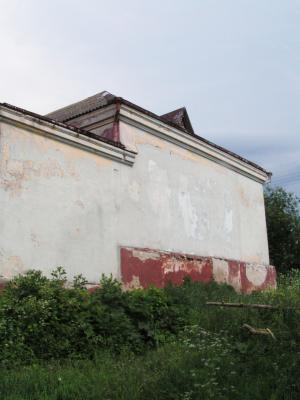 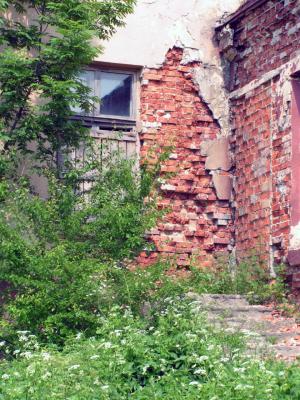