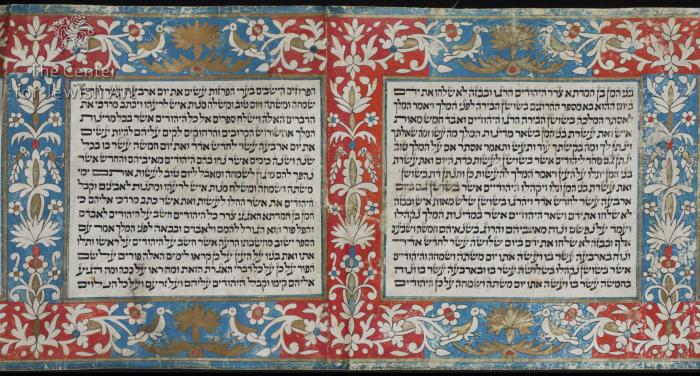 The scroll opens with a benediction sheet that is stitched to its first membrane. Both - the benediction sheet and the scroll - are framed with the same ornamentation. The text panels along all the membranes are framed by stenciled repeating decorations. They are composed of "white" (in reality it is the color of the parchment) pairs of stylized birds and floral motifs (only some elements of them are painted in blue, red, or gold), and gold palmettes. The background of the sections is alternately painted in red or blue. The scroll ends with a decorative cartouche with a coat of arms with a double-headed eagle. Another family emblem in a decorative cartouche is partly preserved on the right edge of the first membrane; probably it is a rampant lion turned to the left, with a palm (?) branch or a lulav in its forelegs.

The ornamentation of the scroll shows a close relationship with several other decorated scrolls and ketubbot; see e.g. the scroll VI.7 (36), Klau Library, Hebrew Union College in Cincinnati (its images are available on https://mss.huc.edu/manuscripts/esther-scroll-vi-7/). On the basis of the latter, the manuscripts can be dated to the second half of the 18th century and connected with artists active in Ancona and/or Lugo.

All details are sketched in black ink and colored with blue, red, or old paints. 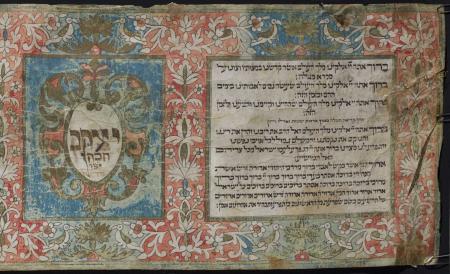 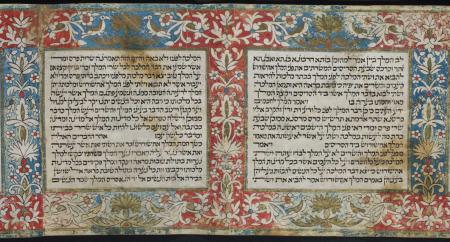 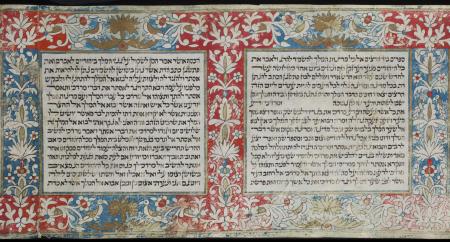 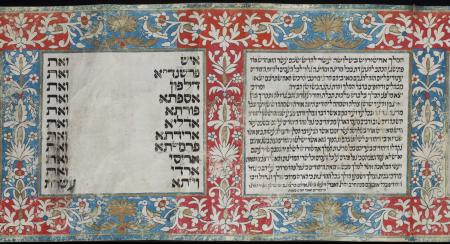 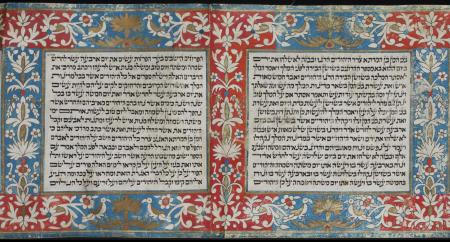 The opening decoration is partly preserved (around half of it is still visible).

The first sheet (at the center of col. 3) is torn and was partly sewn up.

A part of the second sheet is missing.

Parts of the text and decoration have flaked off (especially details colored with blue paint are damaged). Other parts of decoration are very well preserved.

The upper finial of the handle is partly broken.

The Book of Esther in Hebrew that is preceded by the benedictions recited before and after the Megillah reading followed by portions of the piyut Shoshanat Yaakov and the piyut Korei Megillah.

Membranes nos. 1-7 contain 3 columns of text and no. 8 contains 2 columns.

The text is written in square Italian script with tagin in dark brown ink on the flesh side of parchment membranes that are of medium thickness. The sides of membranes are different - the side of the text and decorations is brighter and smoother than the blank side that is yellower but the shade is not the same on all membranes.

The letters ח (Es. 1:6) and ת (Es. 9:29) are slightly larger than an average letter in the scroll. Enlarged and diminished letters are included in col. 17.

The letters in col. 16 are very narrow.

In col. 18, above the right arm of the ע letter in the word עשרת, several tiny dots are visible.

Some erasures and corrections are visible. Some other corrections are added above the lines, e.g. in col. 22 the word אדר was later added to the top left corner by another hand in light brown ink.

The ruling -  horizontal and vertical lines - is made with a hard point and is barely visible. Only in the last panel, it is more visible.

The pricking is not visible.

The membranes in the scroll are sewn together by a leather thread.

The benedictions are written in the same script as the megillah itself. They start with enlarged word ברוך. The name of God is written as two letters י with a stroke above them. In the word אלהינו the letter ה is replaced by ק.

No tagin are added to the letters in the piyut Korei Megillah.

Originally, the inscription contained the name Yaakov but the letters were erased and instead of the name Yitzhak Ha-Cohen was written (the traces of original letters are still discernible underneath). The spelling of the other name - Gardish - is uncertain because the letters are barely legible.

On the opening edge the former shelfmark - 6012 - is written on the blank side. The scroll was probably transferred to the Jewish Historical Institute in 1948 from the Central Storage of the Ministry of Culture and Art in Narożyn in the Kłodzko region, Wroclaw county.

Online collection of the ritual objects from the E. Ringelblum Jewish Historical Institute is available on https://cbj.jhi.pl/documents/974907/0/ (accessed on 15.06.2021).