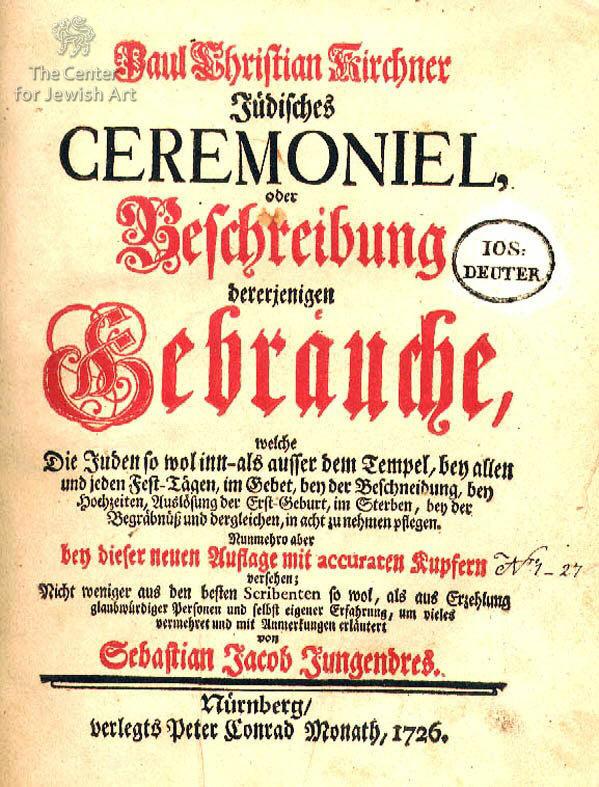 Jüdisches Ceremoniel, oder, Beschreibung dererjenigen Gebräuche [Jewish ceremonies…], by Paul Christian Kirchner. Published by Peter Conrad Monath. Nuremberg, 1726. German. Detailed description of Jewish customs and ceremonies in 18th century Germany, by Paul Christian Kirchner. Accompanied by 30 engraved plates (with the exception of one, all are folded), including engravings which illustrate various Jewish ceremonies: donning tefillin, wimpel for a Sefer Torah, Shabbat and Festivals in the synagogue, etc. This composition was first published in 1717 (without the engravings). The author, born to a Jewish family, converted to Christianity several years before writing this work. In his preface, he declared his intention of convincing other Jews to follow his example and forsake their religion. In 1724, the composition was re-edited by Sebastian Jacob Jugendres, who orrected, refined, and softened Kirchner’s writing.
During the course of the 17th and 18th centuries and the spreading enlightenment of Europe there was an interest on the part of the Christian population concerning the Jews who lived in their midst. There were published a number of books that attempted to explain the customs of the Jews to a Christian audience. Some of these were anti-Semitic while others presented a more balanced view of Jewish practices. This edition of such a book in German by Paul Christian Kirchner, a Jewish convert to Christianity, contains an accusation of a blood ritual. But, other less insidious explanations of Jewish customs were illustrated through a series of 30 elaborate etchings. These etchings provide the contemporary researcher with significant information regarding Jewish costume and customs. That used in the Jewish religion. This book was published in three editions, of which this is the first edition. The type and character of the illustrations became a model that was copied in many other books on the same subject, not always with the same anti-Semitic blood accusations.
Paul Christian Kirchner first published Jüdisches Ceremoniel in 1717, following his 1709 conversion from Judaism to Christianity. The foreword announced his intention to convince other Jews to follow his example. In 1724, the amateur Hebraist Sebastian Jugendres collaborated on a new edition of Jüdisches Ceremoniel. Jugendres corrected, refined, and softened Kirchner's language, spelling, grammar, and scornful tone. This new annotated version included a new foreword and a series of copperplate engravings depicting Jewish customs and rituals.
Jüdisches Ceremoniel epitomizes the necessary cooperation between converted Jews and Christian Hebraists. While former Jews possessed first-hand knowledge of Jewish beliefs, customs, and language; the Hebraists often had a more extensive education. And, as with other early works on Judaism, the images in Jüdisches Ceremoniel have substantial documentary value, even when the text is critical of Judaism.
[10], 226, [18] pages [30] engraved plates 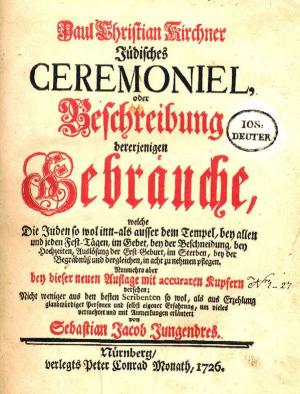 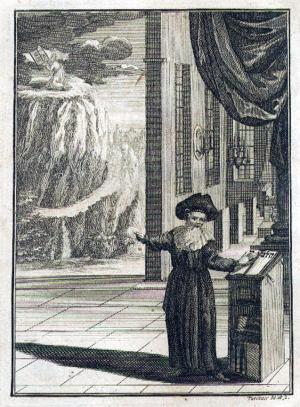