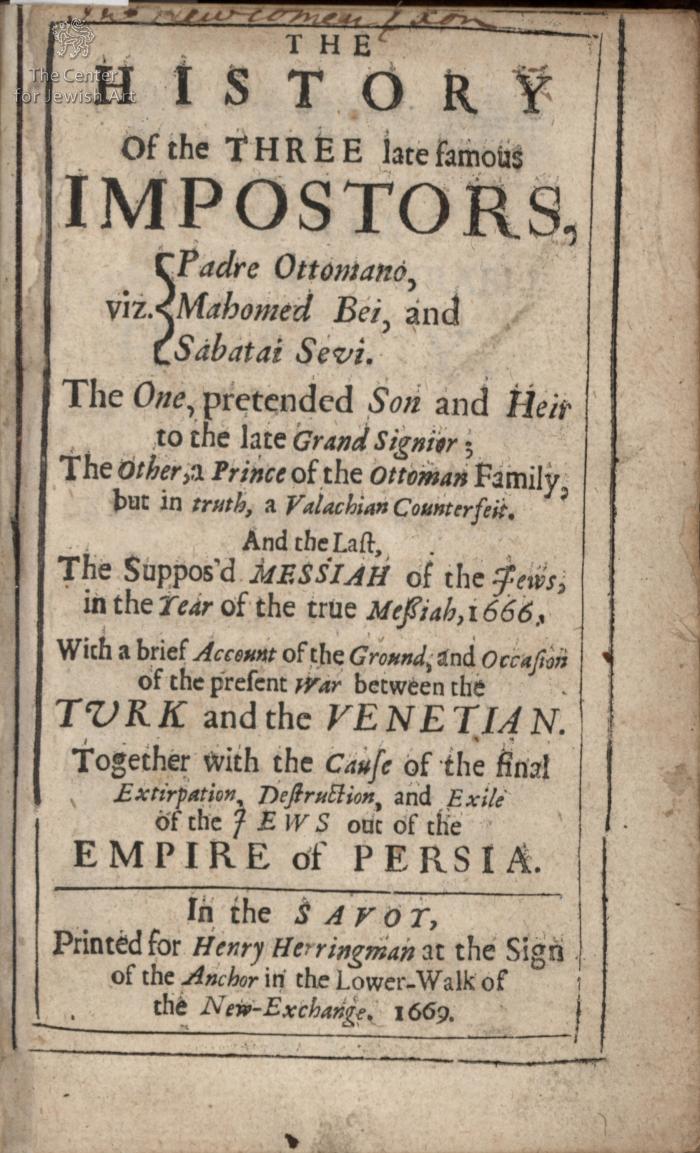 Important source documenting the Shabtai Tzvi false messiah historical episode. Most of this book is devoted to that topic and represents an early and crucial testimony as it was written while Shabbtai Tzvi was still alive.
Shabbetai Zvi was born in Smyrna in 1626, he showed early promise as a Talmudic scholar, and even more as a student and devotee of Kabbalah. More pronounced than his scholarship were his strange mystical speculations and religious ecstasies. He traveled to various cities, his strong personality and his alternately ascetic and self-indulgent behavior attracting and repelling rabbis and populace alike. He was expelled from Salonica by its rabbis for having staged a wedding service with himself as bridegroom and the Torah as bride. His erratic behavior continued. For long periods, he was a respected student and teacher of Kabbalah; at other times, he was given to messianic fantasies and bizarre acts. At one point, living in Jerusalem seeking "peace for his soul," he sought out a self-proclaimed "man of God," Nathan of Gaza, who declared Shabbetai Zvi to be the Messiah. Then Shabbetai Zvi began to act the part, as Gershom Scholem describes:
Riding around on horseback in majestic state [he] summoned a group of his followers, appointing them as apostles or representatives of the Twelve Tribes of Israel. The messianic news spread like wildfire to other communities in Palestine. First reports about Shabbetai Zvi reached Europe early in October 1665, containing detailed accounts. Much was mixed with legendary material and arrived as well in Italy, Holland, Germany and Poland. Messianic fervor took hold of communities that had no immediate experience of persecution and bloodshed as well as those which experienced such events. Repentance alternating with public maniFeztations of joy and enthusiasm was the order of the day. From many places delegations left bearing parchments signed by the leaders of the community which acknowledged him as the Messiah and king of Israel.
Not only did Shabbetai Zvi gain militant adherents in his native Turkey and in the Near East, but even in such cosmopolitan European cities as Venice, Livorno, and Amsterdam leading rabbis and sophisticated men of affairs were caught up in the messianic frenzy.
On September 15, 1666, Shabbetai Zvi, brought before the Sultan and given the choice of death or apostasy, prudently chose the latter, setting a turban on his head to signify his conversion to Islam, for which he was rewarded with the honorary title "Keeper of the Palace Gates" and a pension of 150 piasters a day. The apostasy shocked the Jewish world. Leaders and followers alike refused to believe it. Many continued to anticipate a second coming, and faith in false messiahs continued through the eighteenth century. In the vast majority of believers, revulsion and remorse set in and there was an active endeavor to erase all evidence, even mention of the pseudo-Messiah. Pages were removed from communal registers, and documents were destroyed. Few copies of the books that celebrated Shabbetai Zvi survived, and those that did have become rarities much sought after by libraries and collectors.

This may well be the first published book in the English language concerning Shabtai Tzvi and his activity. The author, John Evelyn (1620-1706), was an English industrialist, botanist and researcher. He documented important events of his time through his diaries and books he published. There is a slightly cut signature on the title page "TH. Newcomen"; it is possible that it refers to the father of the Industrial Revolution and the inventor of the steam engine by that name.
John Evelyn (1620-1706) came from a landowning family in Surrey, England and was a great diarist and dilettante, a connoisseur of engraving and trees and – smoke. He left England during the Civil War, and spent much of his youth traveling in Italy and France. After his return to England in 1652, and with the restoration of Charles II in 1660, Evelyn became involved in politics. Along with his activities in public committees he found time to comment on current events, among them the phenomenon of Sabbatai Sevi. In 1669, Evelyn published his History of Sabbatai Sevi, The Pretended Messiah of the Jewes or History of the Three late Famous Imposters (The other two were Padre Ottomano and Mahomed Bei).
Why should an English politician and landowner be interested in spreading the news of Shabbatai Tzvi? At the time the book was published, Tzvi, who died in 1675, had already converted to Islam, leaving his followers in great shock and his philosopher, or more accurately, prophet, Nathan of Gaza, with the tricky task of coming up with a convincing theological explanation for this scandalous move.
Whatever the reason for the interest we have in Sabbatai Sevi today, back in those days, Tzvi was important news. As it turns out, English folks’ curiosity about Jewish affairs was not restricted to commercial matters. We know for a fact that in 1666, English sportsmen were betting on Tzvi’s career, with odds of ten to one (!) that the Messiah of Izmir would be crowned King of Jerusalem within two years. The most immediate effect of Tzvi was the disruption of commerce; in anticipation of the imminent return to their land, Jews sold their property and dissolved their businesses that promoted much of the international trade between East and West. More significant, though, was the extent to which historical understanding was inseparable from apocalyptic myth in those days (today too?). The year 1666 was expected to bring an apocalyptic disaster as promised by the numerical warning in the Book of Revelation 13:18. The fact that in 1656 Oliver Cromwell readmitted Jews to England was a further definite sign of the imminent Messianic times.
John Evelyn’s account begins with a description of these expectations: “…this Year 1666 was to prove a Year of Wonders, of strange Revolutions in the World, and particularly of Blessing for the Jewes, either in respect of their Conversion to the Christian Faith, or of their Restoration to their Temporal Kingdome…” Evelyn continues with the abundant stories and accounts of miracles, like the story of a ship that arrived in north Scotland, its sails and ropes made of silk, its sailors speaking only Hebrew, and on the sails the motto The Twelve Tribes of Israel (a known sign of messianic redemption). Evelyn’s report represents a historical example of how news travelled in those days and became public. His rather secular approach exhibits an intellectual curiosity, the regular condemnation of the Jewish people, and a warning against religious enthusiasts in general. 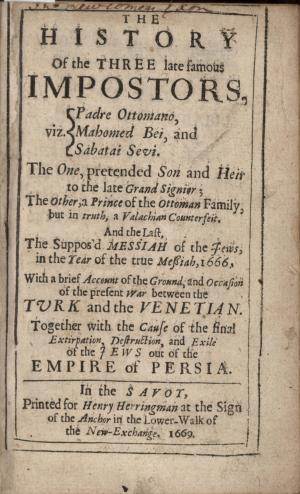 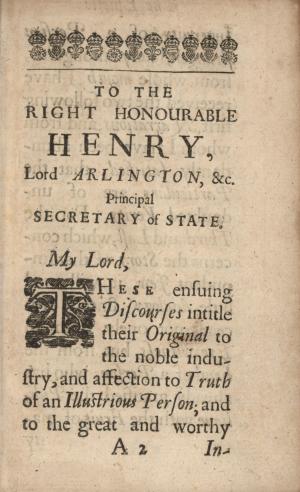 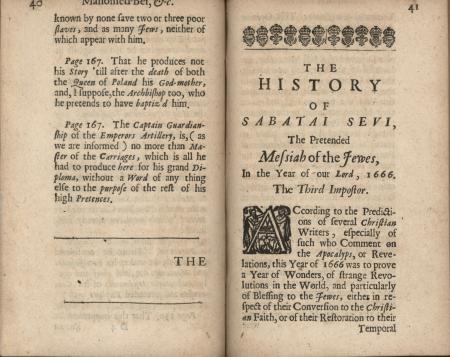 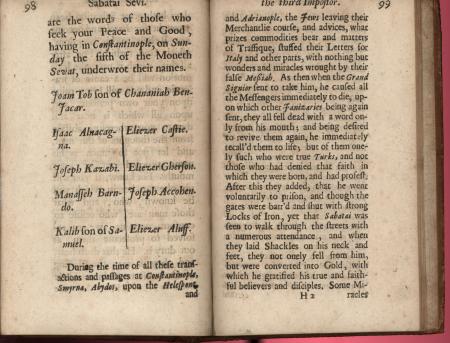 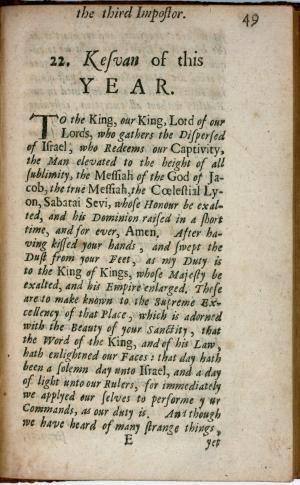