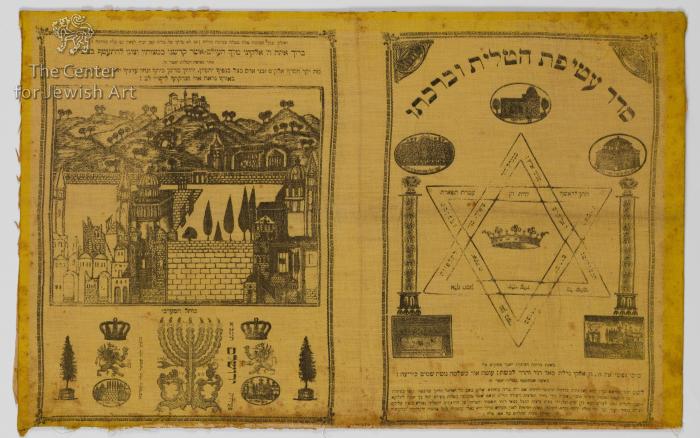 The Tallit is a Jewish prayer shawl, worn on the shoulders over the outer clothes during morning prayers and on a few special occasions as well, such as Yom Kippur evening or the wedding ceremony. Traditionally the Tallit is made of wool or linen, but sometimes from other textiles as well, such as silk or polyester and cotton. In most cases, the Tallit is worn from the time of the Bar Mitzvah and is often a gift from father to son on that occasion. Generally the Tallit is given with a bag with which to carry and store it. This object is such an example.

Printed very nicely on a yellow cotton fabric, this uncut and unsown fabric for a Tallit bag carries images of Holy Land sites that are seen frequently in books and on printed documents from Jerusalem of this time. For a relatively small object, this object carries a large variety of imagery. Another Tallit bag fabric is in the Gross Family Collection, 047.015.013. The images of the Holy sites are particular to the printing firm of Shmuel Zuckerman.

Shmuel ben Ya’akov Halevy Zuckerman was born in Mesiritch in 1856. As a six-year-old child he made Aliyah with his parents. He learned the printing trade while working for Yisrael Bak, after whose death he continued in the printing house of Bak’s son Nisan. He soon went to London, however, and worked in printing there before returning to Eretz Israel to work in the shop of Ag”n. By 1885 he was a partner in that enterprise and from 1886 became the sole owner, publishing books under his name, becoming one of the foremost printers in Jerusalem. The press operated in the Old City of Jerusalem until Zuckerman moved it to the new city in 1926. Up to 1890 almost 80 books were printed from his press in addition to many single sheets. 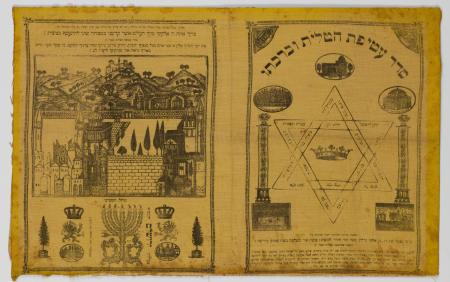