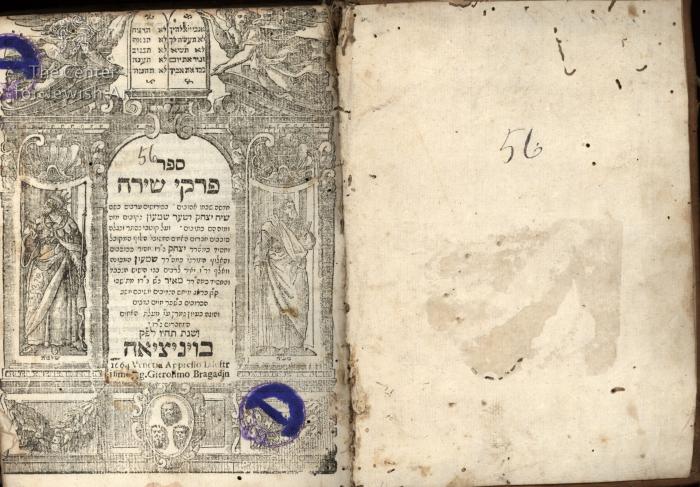 This is an ancient mystical text, composed in verses sung by the heavens and earth and all the creatures in praise of the Creator, attributed to King David. Architectural title page with Moses and King Solomon.
Perkei Shirah (Perek Shirah) is comprised of 70 songs based on biblical verses, organized into six chapters. Its inclusion as part of the liturgy was initially restricted to Jewish mystics, particularly in Tzfat, and only later, through their influence, became more widely accepted as part of daily prayers. In this edition the text is accompanied by the commentaries Siah Yitzhak and Sha’ar Shimeon.
Decorative title page with tablets of the law at the top, supported by angels. Moses and King Solomon stand in niches below. Cartouche with 3 lion heads at bottom center (Bragadin emblem?). For a nearly-identical title page, which shows the figure of King Solomon instead of Aaron, see B.813 (Venice, Bragadin, 1674), and B.819 (Venice, Bragadin, 1675).
The Bragadin press was established in Venice in 1550 by Alvise Bragadin. This press continued as one of Venice’s leading Hebrew print-shops, issuing Hebrew titles in the 18th C under several generations of Bragadins (the last of whom was Alvise III). In the last decades of the The Seventeenth Century Hebrew Book, when this book was published, only the family name, Bragadin, or Nella Stamparia Bragadina appears on the title pages. Throughout the years, the output of the Bragadini press was considerable, and covered the gamut of Hebrew works. The press was somewhat unusual, however, in that the Bragadins themselves did not always take an active role in their printing-house, leaving its operation to other printers, and lending their name to other presses. 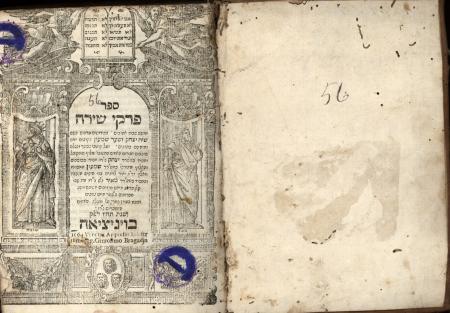