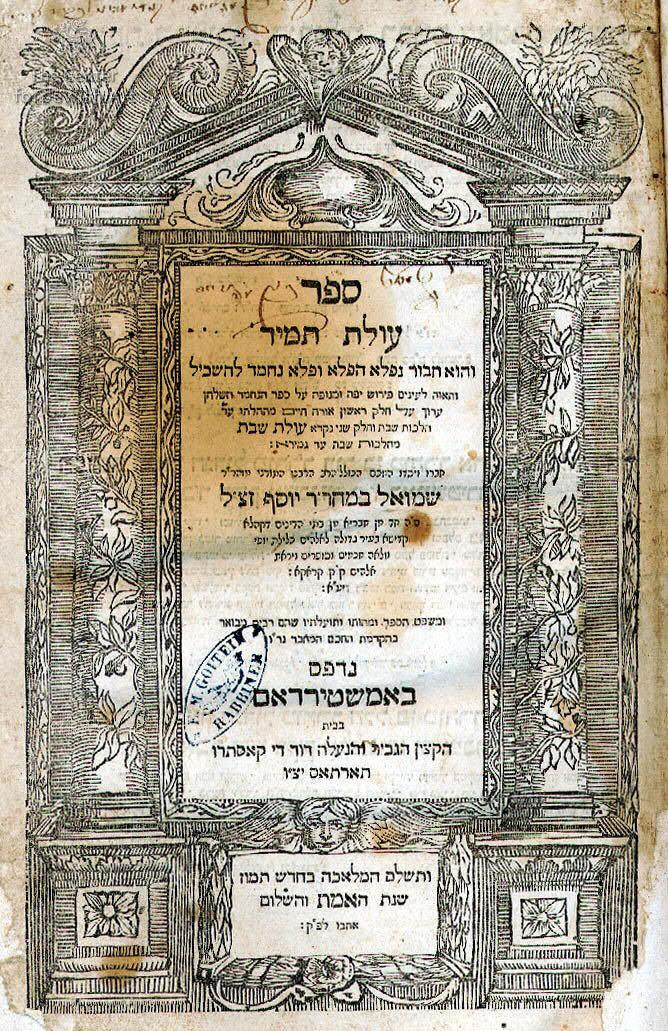 Commentary on the Shulchan Aruch Orah Hayyim by R. Samuel ben Joseph (17th C), dayyan in Cracow. It has approbations from rabbis in the Va’ad Arba Aratzot (Council of the Four Lands), the Ashkenazic and Sephardic rabbis of Amsterdam, and R. Hillel ben Naphtali Hertz Ashkenazi of Altona and Hamburg, followed by the introductions of R. Moses Isserles (Rema) and R. Joseph Caro.
In his commentary, Samuel provides the sources used by Caro and Rema, attempts to reconcile differences between these two commentators, and shows great mastery of early works. As a result, Olat Tamid was , for a short period, considered authoritative. Nevertheless, it has not been a successful work.
Olat Tamid was written at about the same time as R. Abraham Gombiner’s Magen Avraham. Although the latter was completed earlier, events delayed its publication, so that Olat Tamid was published before Magen Avraham. When Olat Tamid appeared Gombiner subjected it to close scrutiny, finding it lacking in his standards of rabbinic scholarship and erudition. Gombiner did not hesitate to record his criticisms, with the result that Olat Tamid, despite its initial acceptance, was not only reprinted, but was only infrequently referred to by later halakhic authorities and is now a rare work. Ironicall, today Olat Tamid is considered important because it provides insight into the objections expressed regarding it in Magen Avraham.
Architectural framework with vine-wrapped columns on either side and winged cherub heads above and below.
The volume was published by David de Castro Tartas, a Portuguese-Jewish printer in Amsterdam. David was one of three sons of Portuguese "New Christians" who had escaped from Bragança, and settled, under the Catholic names Cristóvão Luís and Isabel da Paz in the French town of Tartas. In 1640 they moved to Amsterdam to live freely as Jews, retaining the surname "Tartas." David's older brother Isaac de Castro Tartas (ca. 1623-1647) stayed only 1 year in Amsterdam, emigrated to Brazil, and later was martyred in Lisbon.
David de Castro Tartas started as a typesetter in the printing house of Menasseh Ben Israel, where his name is mentioned in 1647. He later appears in 1662 as owner of his own press and in 1678 as a member of the Amsterdam Printers' Guild. His press competed with that of Uri Phoebus Halevi and the press of Joseph Athias.