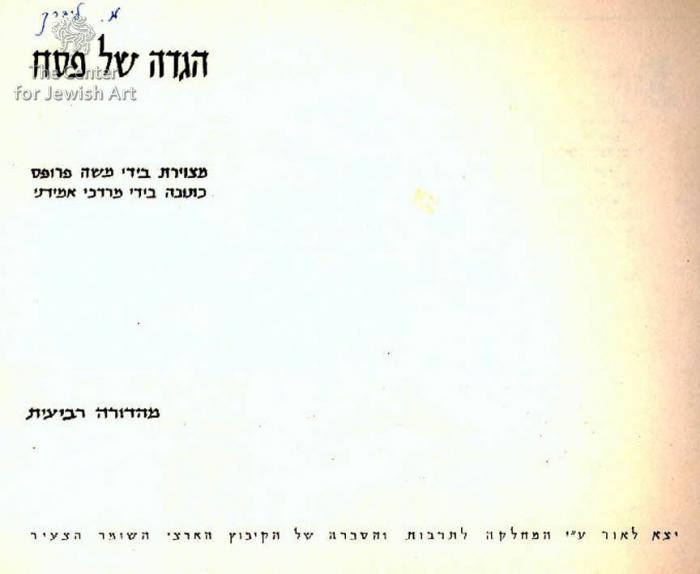 The fourth edition of a Haggadah shel Pesach published for the Kibbutzim in the movement of Hashomer Hatzair. Written by Mordechai Amitai.
The celebration of the Passover in the Kibbutzim in the first half century of their existence took on a form different from that of the religious holiday. The holiday was celebrated in various degrees of the regular traditions of the Haggadah, but special prominence was given to the theme of the coming of spring and the honoring of that event. Additional significance was awarded to concepts found in the Haggadah that were central to the early kibbutz pioneers' ideology: national freedom and socialist ideals.
The staggering number of kibbutz Haggadot (an estimated 1,000 different versions) can be attributed to the fact that few were actually printed; most of those produced in the 1930's and 40's were mimeographed in small numbers, to be used in a particular year by a particular kibbutz. These publications often contain striking graphics which were drawn by members of the Kibbutz, many of whose names were not recorded. It was only later that official kibbutz federations published standard versions of the Haggadah for the kibbutz population. Taken together, these kibbutz Haggadot – their revised texts and innovative illustrations - offer a fascinating perspective on this still evolving social movement.
The youth movement Hashomer Hatzair was a crucial component in the establishment and development of the kibbutz movement. Founded in Eastern Europe on the eve of the First World War, Hashomer Hatzair quickly adopted a Zionist ideology, and stressed the need for the Jewish people to normalize their lives by changing their economic structure (as merchants) and becoming workers and farmers, who would settle in the Land of Israel and work the land as "chalutzim". Their commitment to this cause was realized through promotion of settling in Palestine and their establishment of kibbutzim.
Mordechai Amitai was born in 1914 in Bessarabia, and as a child he moved with his parents to Romania and joined the Hashomer Hatzair Zionist youth movement. In 1935 he immigrated to Eretz Israel and joined Kibbutz Sarid in the Western Jezreel Valley, where he worked as a shepherd in the kibbutz, a guard in the Mandatory Guardians Force, and during the War of Independence he served as an education officer in the IDF Young. In 1943 he joined the editorial board of the daily Al Hamishmar, and was the first editor of the children's supplement Mishmar LeYeledim. He also contributed to the children's literature section of the publishing house of Hashomer Hatzair kibbutzim, Sifriat Poalim.
Mordechai Amitai is remembered mainly as someone who spent many years of his life trying to renew the traditional Passover Haggadah, and to give it a secular, modern and pioneering character. He edited and prepared the first editions of the kibbutz Haggadah of Hashomer Hatzair kibbutzim. His Haggadah was published in several editions, decorated by several painters, and was used for many years. His cooperation with several important painters led to the creation of interesting editions of the kibbutz Haggadah.
Mordechai Amitai died in his kibbutz, Sarid, in 1993, at the age of 79. 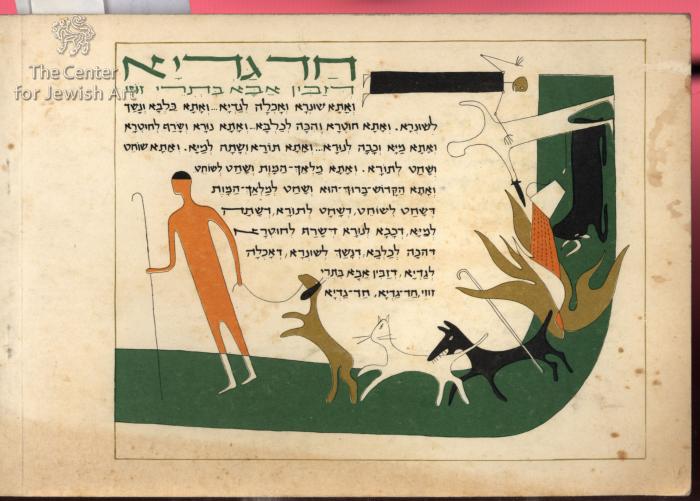 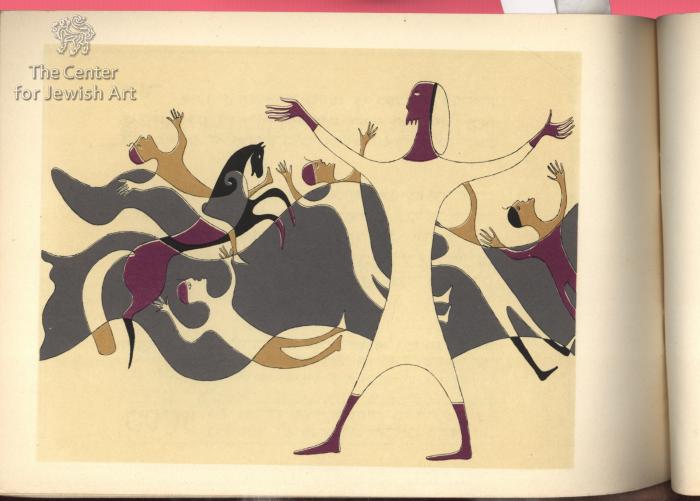 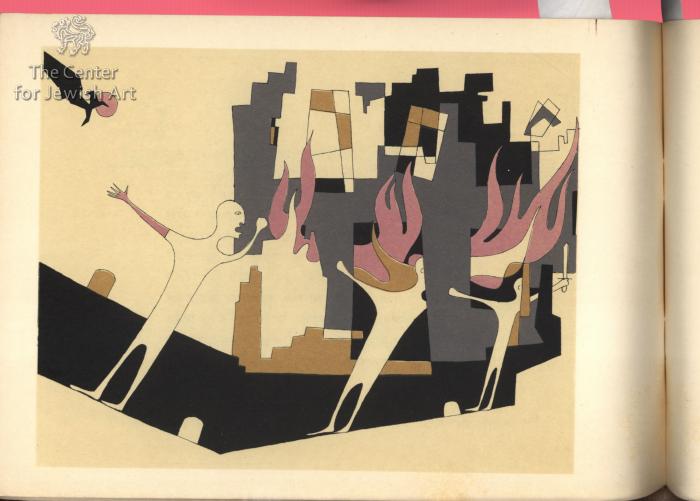 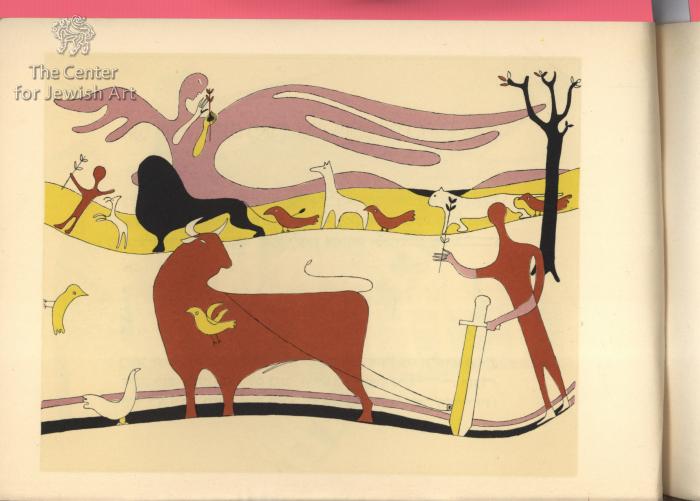 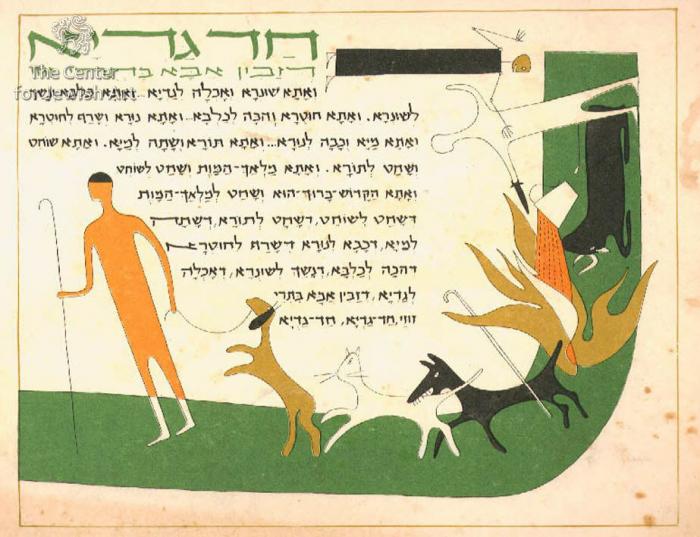 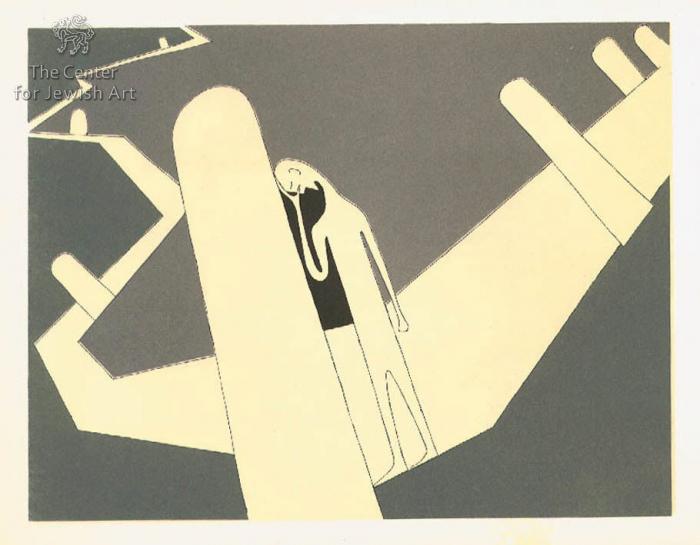