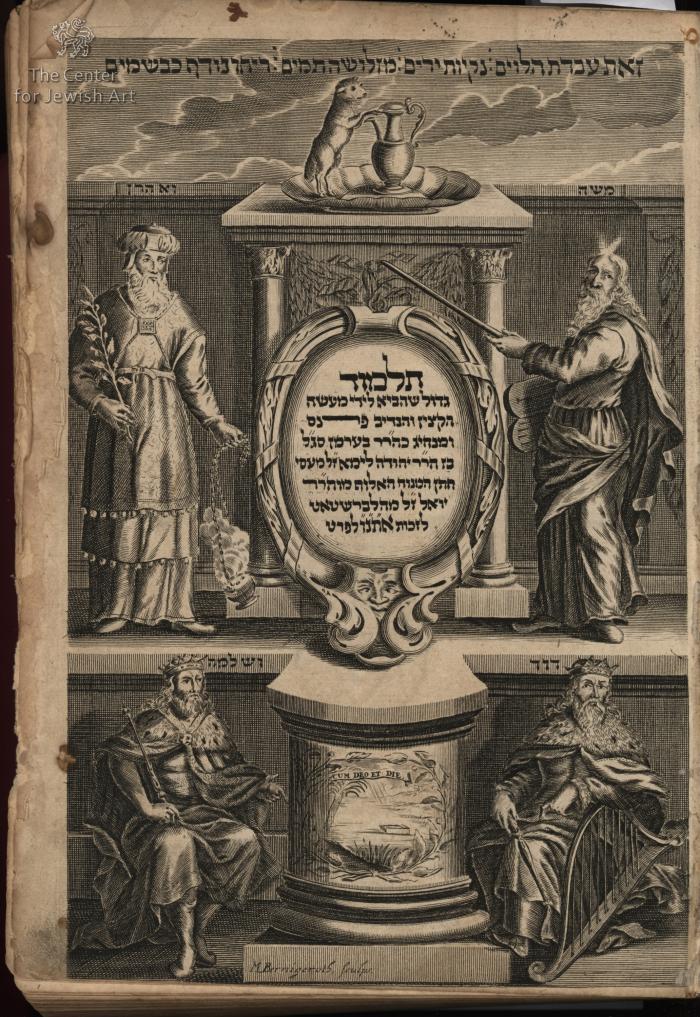 This is one of twelve volumes comprising of a magnificent set of the Talmud, the first to be printed in Frankfurt am Oder Talmud. Produced in 1697-1699, this vast publication was sponsored by the Court Jew Issachar (Behrend Lehmann) ha-Levi Bermann (1661-1730) of Halberstadt, by whose name this Talmud is today known. Bermann reputedly spent 50,000 Rhenish Thalers on its publication, and distributed half of the 5,000 sets produced to important scholars and institutions whose resources had been devastated by the many wars and invasions of the last half of the 17th century, particularly in Eastern Europe. In terms of costs at the time, this was an enormous contribution by Behrend Lehmann for his co-religionists.
Each volume has two title pages. The first is a magnificent copperplate frontispiece by Martin Bernigeroth (1670-1733) – one of the most elegant of any designed for a Hebrew book. This page was printed both with and without the artist’s signature. It shows the figures of Moses and Aaron, and Kings David and Solomon, each in modulated chiaroscuro, and identified above by their name. At the top of the portico is a sheep and a laver, thought to represent Bermann, who was a Levi, born under the astrological sign of Aries (Nisan). This volume title page is followed by the individual tractate title pages, which bear Michael Gottschalk’s printer’s mark, a mirror-image monogram formed from the interlaced letters of his initials MG.
An important feature of the Berman Talmud is its restrictive haskamot, issued for 15-25 years, forbidding the protected work from being reprinted for that period of time, in order to allow the printer to recover his investment, which could be considerable in the case of a large work such as the Talmud. This is the first such usage of rabbinic haskamot, granting the sole right to print the Talmud to a printing house for a specific period of time. These restrictive approbations would later cause many disputes between printing houses. Gottschalk himself would later use the haskamot issued for this Talmud to prevent the completion of the Amsterdam Talmud begun in 1714 by Samuel b. Solomon Marcheses and Raphael b. Joshua de Palasios.
Issachar Bermann, as he was called in the Jewish world, was one of an elite group of Jews called Court Jews, who served various rulers during the 17th and 18th centuries in the many states and principalities of what is now Germany and Austria. They were purveyors to and financiers for these rulers, becoming in many cases extremely wealthy, as did Lehmann, who served as Court Jew to Saxony.
Michael Gottschalk was a local bookbinder and bookdealer who took over the management of Johann Christoph Beckman's printing press in Frankfort d.O. in 1693. Gottschalk became the moving spirit of the press for almost four decades. This completed edition of the Talmud, printed in 1697-1699, was his most ambitious project. It is the work for which the Frankfurt press is best known to this day.
When Gottschalk and Beckman secured a royal imprimatur to print the Talmud, the originally approached the Dessau Court Jew Moses Benjamin Wulf to sponsor this enterprise. Wulff accepted, the contract was agreed upon, and Beckmann and Gottschalk began to sent the stipulated supplies to Dessau. Work, however, progressed slowly, expenses were considerably higher than expected, and the staff was inexperienced. Wulff was eventually forced to withdraw his support and pay compensation to the publishers. Support of the project was then taken over by the Halberstadt Court Jew Isaachar ha-Levi Bermann. 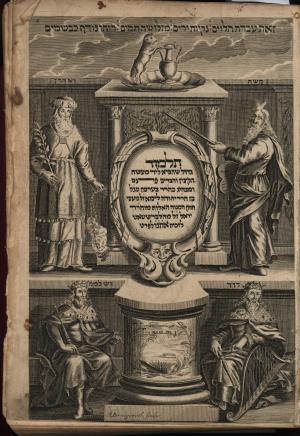 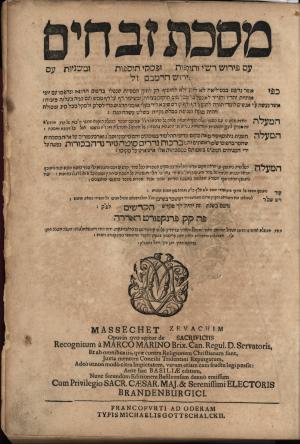 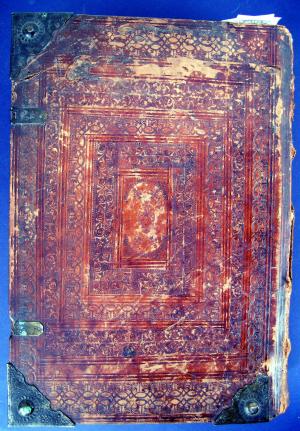 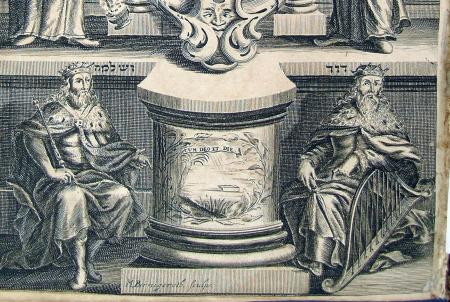