The right edge of the first membrane is trimmed into a conical shape that is filled with a schematic and symmetrical floral motif - the only decoration in the scroll. The text columns are inscribed in double frames colored with two contrasting paints. 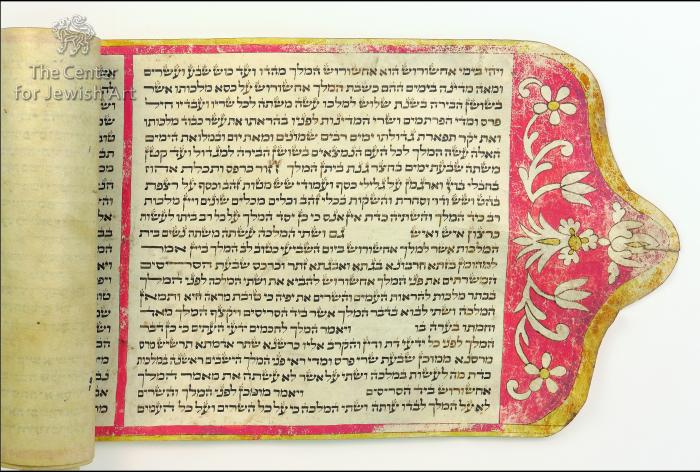 The scroll is formed of 5 sheets containing 14 columns of the text with 22 lines, except for col. 12 with 11 lines divided into two parts.

The text is inscribed in the Hebrew square Italian-Sephardi script with tagin, in almost black ink, on the flesh side of parchment membranes that are very bright (the blank side of the sheets is yellow). The sheets are of different thicknesses but they all are rather stiff.

The letter ח (Es. 1:6) is highlighted by its form (it is composed of two parts joined with a roof) and additionally, it is slightly larger than an average letter in the scroll. The letter ת (Es. 9:29) is enlarged. Other enlarged and diminished letters are included in col. 12.

The ruling is made with a hardpoint. The vertical lines are better visible than horizontal ones. In col. 12 every second line was marked.

Previously the scroll must be mounted on a roller; this is suggested by holes and remains of the thread.

The ornamentation of the scroll shows a certain relationship with several other decorated scrolls and ketubbot; see e.g. the scroll, Bibliotheca Abrosiana, Milan. On the basis of the latter, the manuscripts can be dated to the 2nd half of the 18th century and connected with artists active in Ancona and/or Lugo.

For a related scroll in the Index see ID 58.