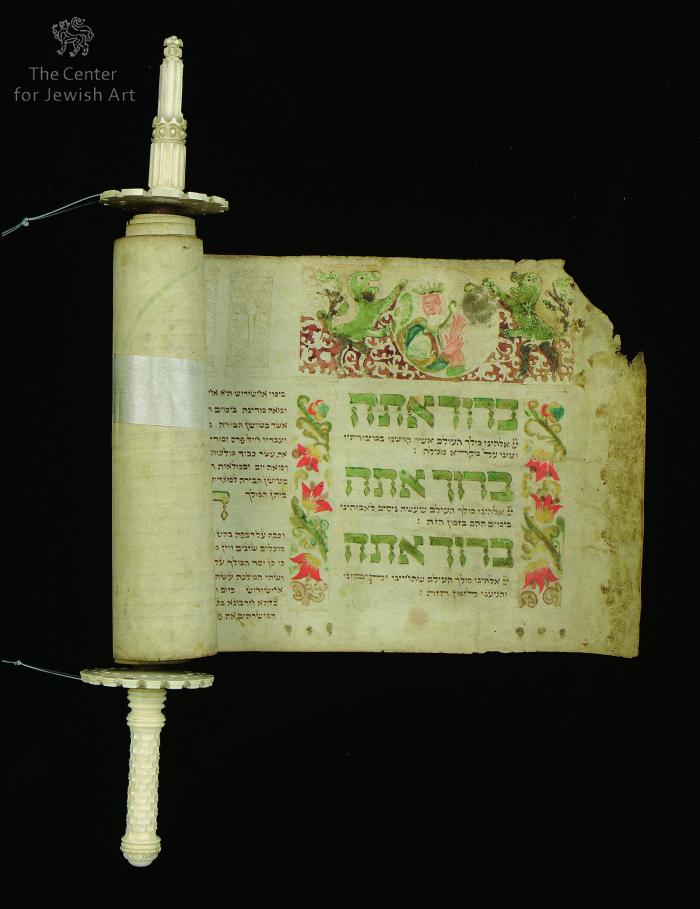 The scroll is hand-decorated with various types of ornamentation; only some of them are directly related to the Esther story. It opens with a decoration surrounding all three benedictions recited before the Megillah reading. They are flanked by two columns decorated with colorful flowers and leaves and similar columns separate most of the text panels.

This section is followed by the first column of the text of the Book of Esther that opens with the initial word ויהי inscribed in large, hand-drawn letters; every letter is separated in it and surrounded with a filigree ornament. In the same way, the word איש in the third column is highlighted; additionally, it is flanked by a floral motif. The rest of the text is copied within arches. Above them, a floral ornament is drawn with a pen and ink, and between them, in square-like frames, colorful figurative scenes are placed but the latter are absent on the third sheet. A different type of decoration appears in the tenth column containing section listing names of Haman's sons (Es. 9:6-10).

Large words, entirely painted, with small circles in the half of their vertical components are incorporated in the text; some of them are also framed. Additionally, enlarged letters forming the Tetragrammaton and large, letters פ with a decorative tendril inside are included in the text.

The scroll is mounted on a wooden roller with carved ivory finials. 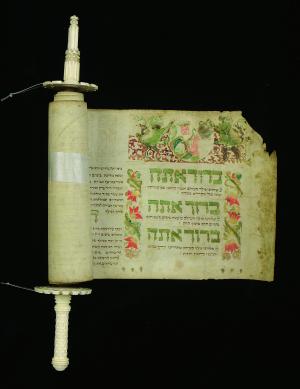 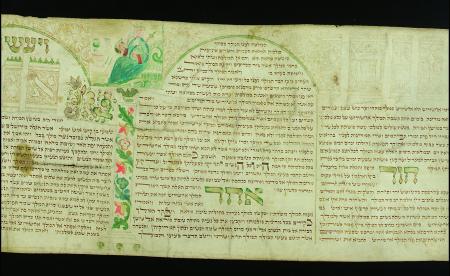 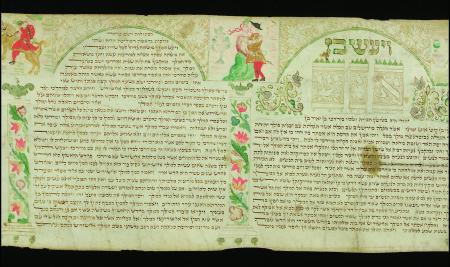 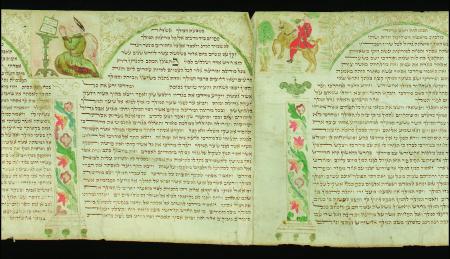 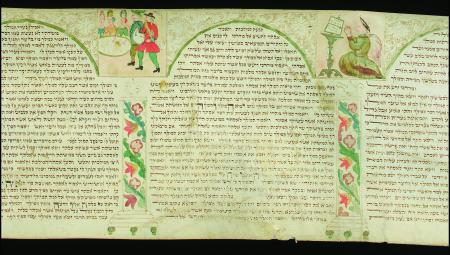 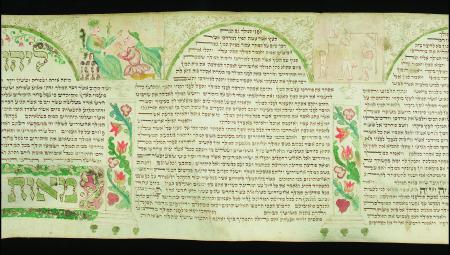 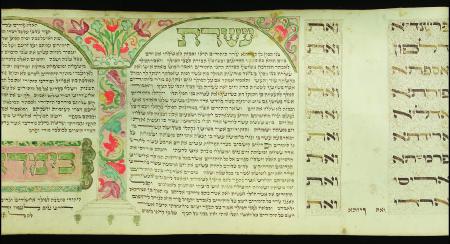 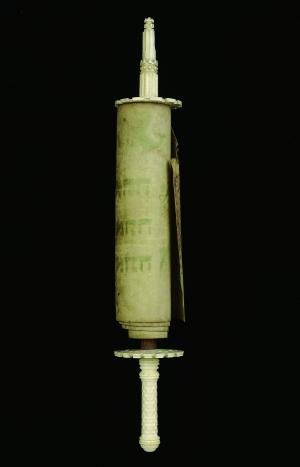 The first membrane lacks its upper-right corner and it is torn in two places; there is also a yellow stain on it.

On the blank side of a sheet, a piece of silver tape is visible.

The edges of the sheets are dirty.

The Book of Esther in Hebrew preceded with the initial benedictions for the Megillah reading.

The scroll is formed of 3 sheets containing a total of 12 columns of text (+ initial column containing benedictions) that are of different shapes and very wide (the columns on the second sheet are similar to each other).

Col. 10 contains 12 lines divided into two parts and decorated. The last name of Haman's sons was omitted and it was added on the blank space, between the half-columns; these two words are reversed.

The text is inscribed in the Hebrew Ashkenazi stam script with tagin in brown ink on the flesh side of parchment membranes of different thicknesses. Their side of decorations and text is brighter and smoother than the blank side.

The scroll opens with a decorative initial word.

The letter ח (Es. 1:6) is highlighted by its size - it is enlarged, bolded, painted, and decorated with dots; two other letters in the word are executed in the same way too. The letter ת (Es. 9:29) is enlarged and bolded. Other enlarged and diminished letters are included in col. 10.

The text includes large letters פ with a flourish inside.

The letter ע of the last word is decorated.

The letters of the Tetragrammaton are enlarged and bolded. On the second sheet, they can be found four times.

The benedictions are copied in a prefatory panel. The words ברוך אתה are inscribed in large hand-drawn and colored letters (they could be originally painted gold) separated from the rest of the formulas. They are written in the square script. Instead of the Tetragrammaton, a ligature is used.

A similar scroll is stored in a private collection in Europe.