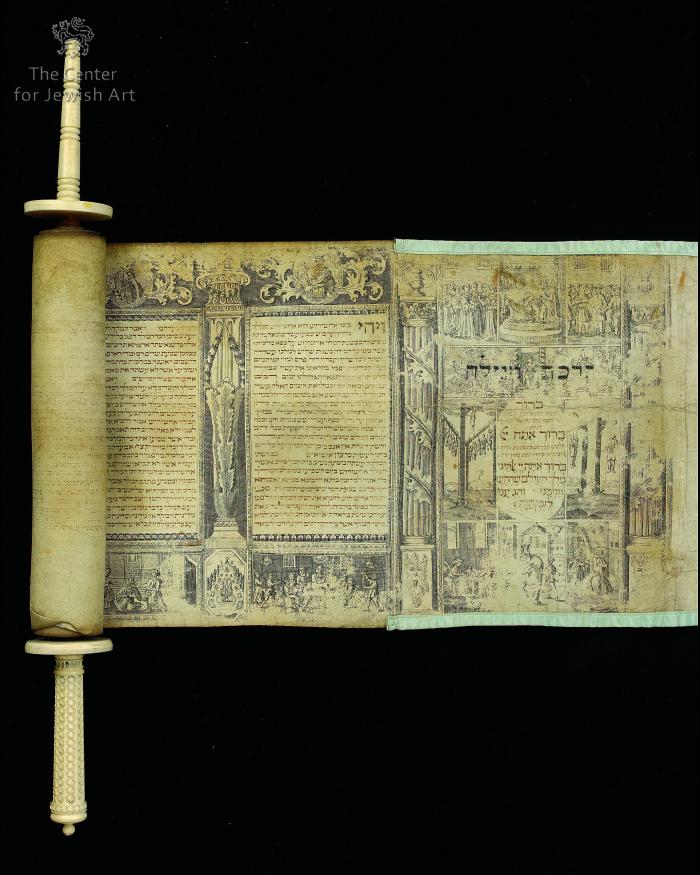 The scroll represents the type called "scrolls with portrait medallions" that are lavishly decorated and illustrated megillot produced in a mixed technique in which decorative border is printed as a copper engraving and the Hebrew text of the Book of Esther is penned by a scribe. It features decorative medallions placed in upper margins, above the text panels, containing busts of the Esther story protagonists except for the last one where a printed word ברוך – "blessed" is placed. The roundels are surrounded by acanthus leaves. The decorative scheme opens with a panel containing several illustrations from the Esther story; the central panel is designed for the benedictions. In a rectangular panel, directly above, the Hebrew words ברכת מגילה - "blessings for the Megillah" are printed. The text is written in regular rectangular columns enclosed in frames and separated by pillars formed of a variety of motifs such as trees, flowers, acanthus leaves, heads of angels, and architectural elements. Lower margins are filled with figurative scenes that chronicle the Book of Esther's narrative or allude to midrashim and other sources. They are separated by the octagons (placed beneath the decorative pillars) filled mainly with land- and seascapes, most likely with no direct relation to the Purim story. The scroll ends with five full representations of the Esther story protagonists holding oval shields that in the exemplar from the London collection are filled with Hebrew inscriptions. The panel above them is narrower than other panels; it contains a blessing after the Megillah and a liturgical poem for Purim.

Underneath the opening section of the scroll, a piece of fabric is stitched.

The scroll is mounted on a wooden roller with ivory finials. 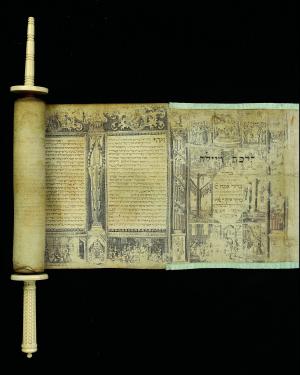 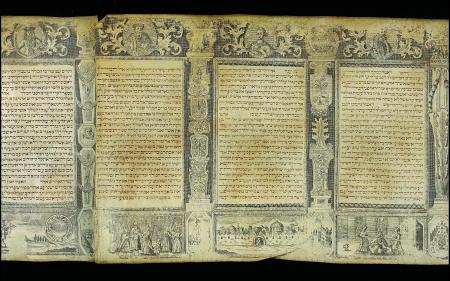 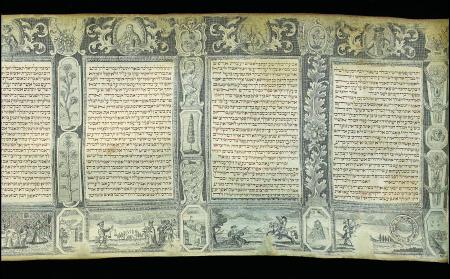 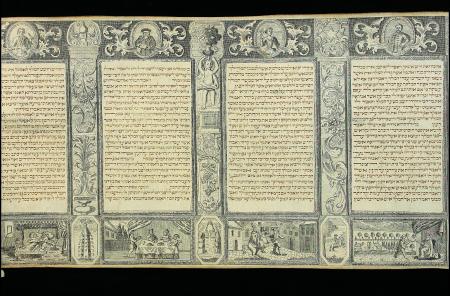 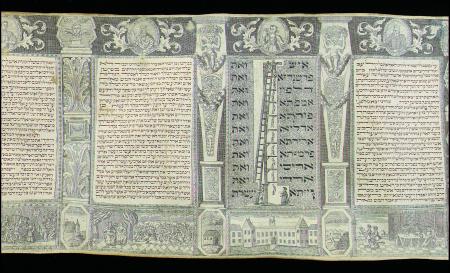 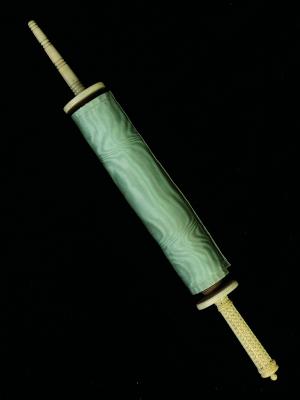 There are serious damages to the print on the first sheet and the final section of the scroll.

The text in many places is faded.

The sheets, but especially the first one, are crumpled.

The scroll is formed of 4 sheets containing a total of 16 columns of text and two additional benediction panels at the beginning and the end of the manuscript. Each column includes 24 lines of text, except for col. 14 with 11 lines divided into two half-columns.

Every sheet comprises 4 columns of the text.

The text is inscribed in the Hebrew square script with tagin, in brown ink, on the flesh side of parchment membranes of different thicknesses. The side of the text and decorations is brighter and smoother than the other one that is suede.

The letter ח (Es. 1:6) is highlighted by its and form - it is very wide, composed of two elements joined with a roof, and is decorated with scrolled feet. The letter ת (Es. 9:29) is enlarged and bolded. Other enlarged and diminished letters are included in col. 14.

In some places, letters פ with a flourish inside can be seen.

The pricking is visible only at the very end of the scroll, close to the roller.

The final blessing starts with a printed word ברוך placed in the upper margin and is copied in a square script. In the column below it, the Purim poem is copied in a semi-cursive script but the letters opening the subsequent verses are inscribed in the square script (they are bolded too). The first word - אשר - is enlarged and bolded.

Before the opening decoration, there is a blank space that is 80 mm wide.

The text in column no. 14 is printed.

No bibliography on the manuscript is available but other scrolls sharing the same pattern are discussed in: