Another example of the phenomenon in certain Rimmonim from North Africa where each of the two pieces of a pair were made by different craftsmen, each of whom signed his work. This pair is further distinguished by the fact that the main body is composed of elements made at different times as well. This seems to be the early form of Rimmonim in Algeria, and another early pair is in the Jewish museum in Paris.

Rimmon B: Soul and spirit of the departed, precious Shelomo son of Eliahu Seltan, Baggai. The departed, Precious R. Yehuda son of Joseph......, Gabbai, .... Made by the artisan Hayyim Saada, Ma6y the Lord protect him. Moseh... Masoud Levi, Moshe Chiche 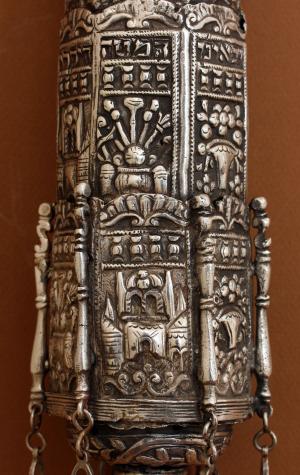