The following description was prepared by William Gross: The finials evolved from knobs at the upper end of the staves (Atzei Chaim) on which the Torah scroll is wound. Since the shape of the spherical finial recalled that of a fruit, it was called a tappu'aḥ, "apple," among the Jews of Spain and in the Sephardi Diaspora, and a rimmon, "pomegranate," in all other communities.

This style of Rimmonim is unique to Aden and is done in the style and workmanship of that city and southern Yemen. This type was used as well in combination with a special crown developed in that area, an example of which is in the Israel Museum. This particular example has a dual inscription, one describing the original donation and the other the donation regarding the repair after the Rimmonim had become damaged.

Inscription: Sanctified unto the Lord. {Belonging to} the Synagogue. For the invocation of the soul of Nissim Yosef {son of?} the late Hazi Asrouf. Thanks to the Lord, by my endeavor, I, the "youth", Zvi Me'ir Hemmou, may the Lord sustain and protect him. After all this (?) they (the finials) were damaged and all their bells were lost from them, and we again restored everything. From the money of the honorable woman, Madam............., may she be most blessed of women in tents, daughter of........., may she live a long life, the year 5686 (1926) 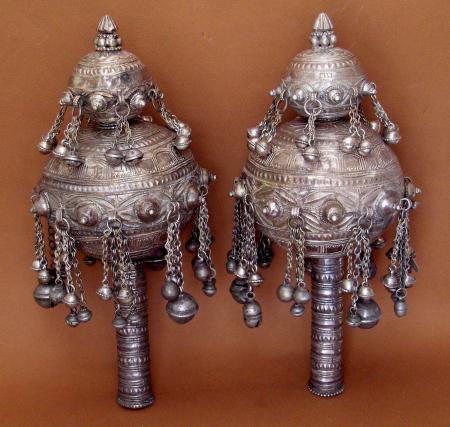 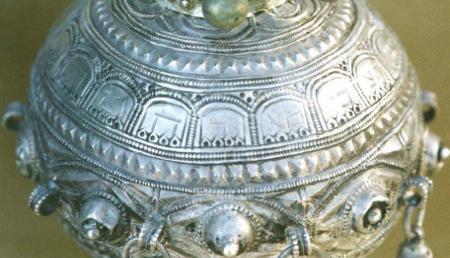