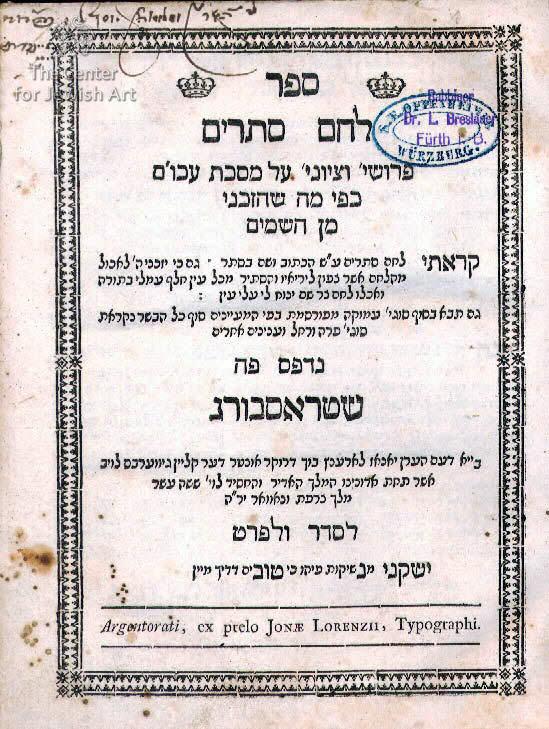 Commentary on Avoda Zara by Rabbi Nissim Shlomo Algazi. This second edition was based upon a copy of the first edition which was in the library of Rabbi David Zintzheim, who added an introduction in honor of the author. R. Solomon Nissim b. Abraham Algazi (1610?–c. 1683), the grandson of R. Joseph de Segovia Benveniste, was born in Borsa. He studied under his father and the poet R. Joseph Ganso, as well as R. Joseph Sasson and R. Meir de Boton at their yeshivah in Gallipoli. Algazi settled in Jerusalem in 1635, but was in Smyrna in 1646 - apparently in order to publish some of his works. Here he remained and was considered one of the city's outstanding scholars. He founded a bet midrash whose students included his son-in-law, R. Aaron Lapapa, and R. Hayyim b. Menahem Algazi, later rabbi of Rhodes. R. Algazi opposed Shabbetai Zevi and his followers; together with his son-in-law and other scholars, he excommunicated Shabbetai Zevi and stated that he deserved the death penalty. Compelled to flee and hide outside the city, when Shabbetai Zevi's apostasy became known (1666) he returned to Smyrna and resumed his position. R. Algazi assumed the additional name Nissim on recovering from a serious illness contracted during his travels. He returned to Jerusalem about 1670, and by 1673 was head of the local bet din. R. Algazi achieved a reputation for his saintliness and was reputed as a miracle worker.
Only few Hebrew books were printed in Strasbourg. Between 1540 and 1740 a number of Bibles were printed by Christian printers. This book is the first to be printed in the mid-1700’s, upon the reinstatement of the Hebrew printing in the city for a short while. 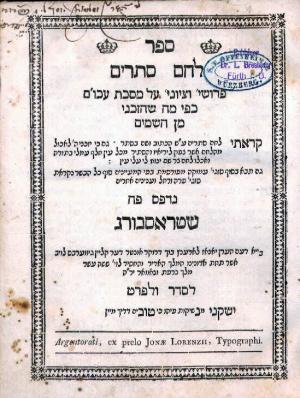