This elaborate gold pendant is for the forehead, fashioned in urban gold work, set with jewels and containing a number of hamsa representations. This piece is called the "Tabaa". This is a piece of jewelry especially made in Fez by the Jewish goldsmiths whose specialty was this sort of open work gold set with precious and semi-precious stones. The piece is framed by a crescent with sharp points whose symbolic purpose is to catch, deflect and disperse in multiple directions the power of the evil eye directed against the wearer. 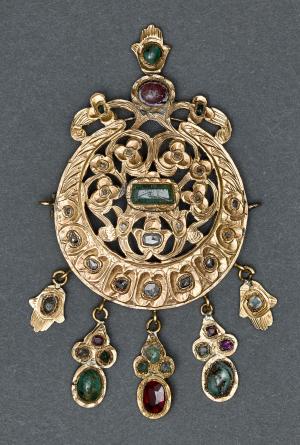