A mezuzah (Hebrew: מְזוּזָה‎ "doorpost"; plural: מְזוּזוֹת mezuzot) is a piece of parchment (often contained in a decorative case) inscribed with specified Hebrew verses from the Torah (Deuteronomy 6:4-9 and 11:13-21). These verses compose the Jewish prayer "Shema Yisrael", beginning with the phrase: "Hear, O Israel, the LORD (is) our God, the LORD is One". In the mainstream, i.e. Rabbinic Judaism, a mezuzah is affixed to the doorframe of Jewish homes to fulfill the mitzvah (Biblical commandment) to inscribe the words of the Shema "on the doorposts of your house" (Deuteronomy 6:9). Some interpret Jewish law to require a mezuzah on every doorway in the home apart from bathrooms and closets too small to qualify as rooms. The parchment is prepared by a qualified scribe who has undergone many years of meticulous training, and the verses are written in black indelible ink with a special quill pen. The parchment is then rolled up and placed inside the case.

The Mezuzah for the interior room in a Jewish home in Morocco consisted of an elaborate cover over a niche in the usually plaster wall in which the parchment of the Mezuzah was placed. This cover was made for Ya'akov Bouskila of Fez and bears his name. Such Mezuzah covers are most commonly cut out or engraved with the name of a woman. This style was common in Fez for more than thirty years, beginning in the 1920's. It would appear that there was at least one workshop of Jewish silversmiths specializing in this cutout technique with engraving. Silver and gold work in Morocco was almost exclusively in Jewish hands. It was a specialty of many Jewish craftsmen in Fez, where the many shops of the artisans line the main street of the Mellah, the Jewish area of the city. This example is of the shield shape in which most such covers are found. This nicely worked piece of silver was mounted on carton covered with red cloth and hung over the opening in the wall into which the mezuzah was placed inside the home. At the upper end appear a crescent, a flower with a circle in the middle, representing an eye, and the large hamsa. All the elements give generalized protection to the household against the evil eye. 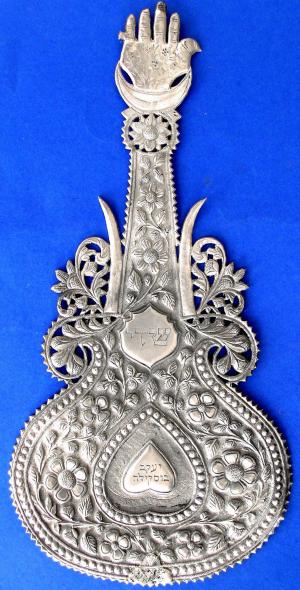 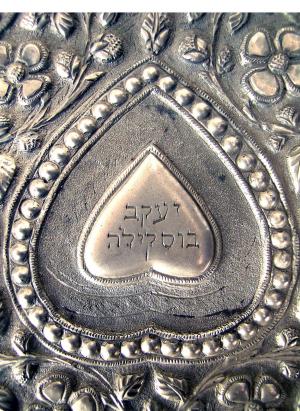