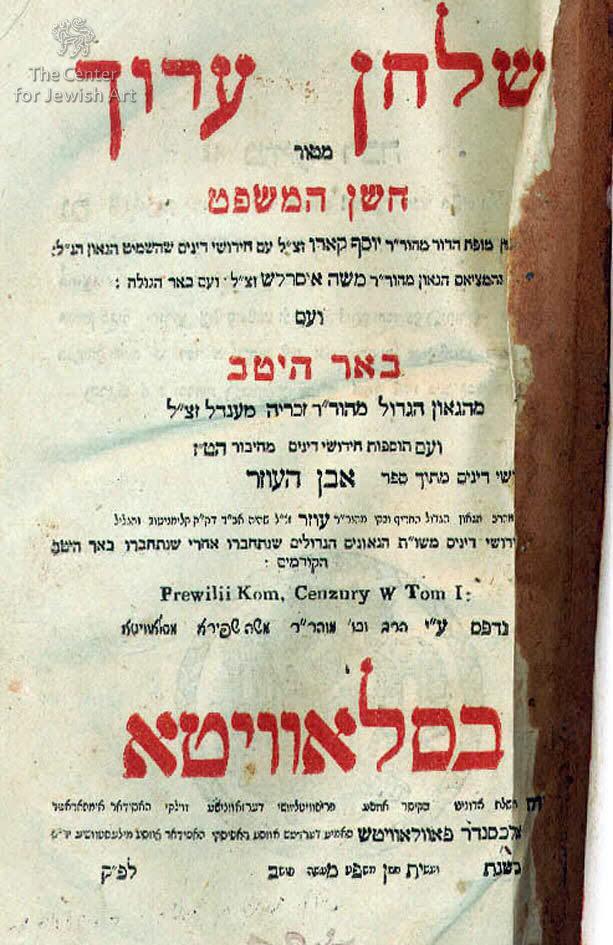 The Shulchan Aruch (Hebrew: שֻׁלחָן עָרוּך‎ [ʃulˈħan ʕaˈʁuχ], literally: "Set Table") also known by various Jewish communities but not all as "the Code of Jewish Law." There are various legal codes in Judaism but the Shulchan Aruch is the most widely consulted. It was authored in Safed, Israel, by Yosef Karo in 1563 and published in Venice two years later. Together with its commentaries, it is the most widely accepted compilation of Jewish law ever written.
The halachic rulings in the Shulchan Aruch generally follow Sephardic law and customs whereas Ashkenazi Jews will generally follow the halachic rulings of Moses Isserles whose glosses to the Shulchan Aruch note where the Sephardic and Ashkenazic customs differ. These glosses are widely referred to as the mappah (literally: the "tablecloth") to the Shulchan Aruch's "Set Table". Almost all published editions of the Shulchan Aruch include this gloss, and the term "Shulchan Aruch" has come to denote both Karo's work as well as Isserlis', with Karo usually referred to as "the mechaber" ("author") and Isserles as "the Rema".
The Shulchan Aruch (and its forerunner, the Beit Yosef) follow the same structure as Arba'ah Turim by Rabbi Jacob ben Asher. These books were written from the standpoint of Sephardi Minhag, other works entitled Shulchan Aruch or Kitzur Shulcan Aruch cited below are written from the standpoint of Ashkenazi Minhag. There are four sections, each subdivided into many chapters and paragraphs.
Orach Chayim - laws of prayer and synagogue, Sabbath, holidays;Yoreh De'ah - laws of kashrut; religious conversion; Mourning; Laws pertaining to Israel; Laws of family purity Even Ha'ezer - laws of marriage, divorce and related issues; Choshen Mishpat - laws of finance, financial responsibility, damages (personal and financial), and the rules of the Bet Din, as well as the laws of witnesses.
Joseph ben Ephraim Karo, also spelled Yosef Caro, or Qaro (1488 – March 24, 1575),was author of the last great codification of Jewish law, the Shulchan Aruch, which is still authoritative for all Jews pertaining to their respective communities. To this end he is often referred to as HaMechaber (Hebrew: "The Author"‎) and as Maran (Aramaic: "Our Master").
Karo was born in Toledo, Spain in 1488. In 1492, aged four years old, he was forced to flee Spain with his family and the rest of Spanish Jewry as a result of the Alhambra Decree and subsequently settled in Portugal.[3] After the expulsion of the Jews from Portugal in 1497, the Ottomans invited the Jews to settle within the Ottoman Empire. Karo went with his parents to [[Nikopol, Bulgaria|Nikopolis], then a city in the Ottoman Empire, and spent the rest of his life in the Ottoman Empire. In Nikopol, he received his first instruction from his father, who was himself an eminent Talmudist. He married, first, Isaac Saba's daughter, and, after her death, the daughter of Hayyim Albalag, both of these men being well-known Talmudists. After the death of his second wife he married the daughter of Zechariah Sechsel (or perhaps Sachsel), a learned and wealthy Talmudist.
Already as a young man, he gained a reputation as a brilliant Torah scholar. He began by writing an explanation on the Rambam's Mishneh Torah. He called his work the Kesef Mishnah. Here he cited and explained Rambam's sources.
Between 1520 and 1522 Karo settled at Edirne. He later settled in the city of Safed, Land of Israel, where he arrived about 1535, having en route spent several years at Salonica (1533) and Istanbul.
Karo published during his lifetime:
Beth Yosef (בית יוסף), a commentary on Arba'ah Turim, the current work of Jewish law in his days. In this commentary Karo shows an astounding mastery over the Talmud and the legalistic literature of the Middle Ages. He felt called upon to systematize the laws and customs of Judaism in face of the disintegration caused by the Spanish expulsion. Shulchan Aruch (שולחן ערוך), a condensation of his decisions in Beth Yosef. Finished in 1555, this code was published in four parts in 1565. The work was not accepted without protest and criticism, but after the lapse of a century, and in consequence of certain revisions and amplifications, it became the almost unquestioned authority of the whole Jewish world. 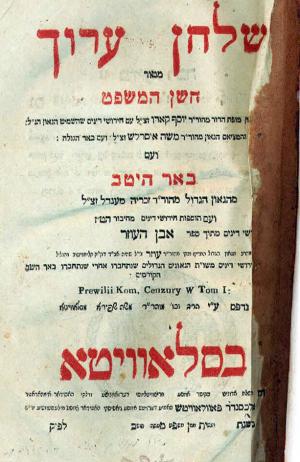 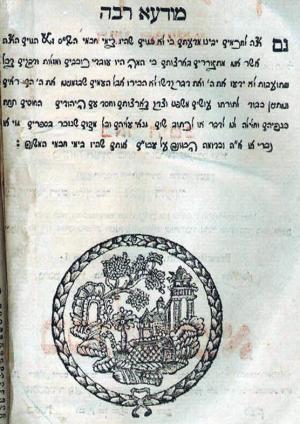