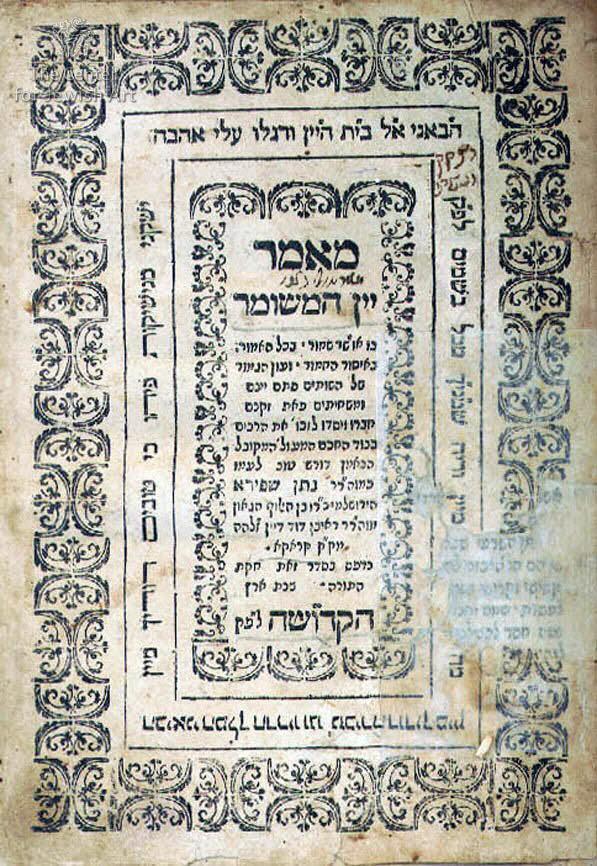 On the prohibition against drinking gentile wine and shaving one's beard.
Italian Jewry was considered lax in their observance of these two mitzvot, necessitating this work by R. Nathan Nata ben Reuben David Spira and numeorus other rabbis, whose interpretations (mostly kabbalistic) were published here for the first time. Concern over these mitzvot and their observance is evidenced not only in this publication but also in the responsa in R. Judah Leib ben David Pisk of Nikolsburg’s Dimyon Aryeh (Prague, 1616) and in the extensive correspondence between rabbis in Safed and Italy, as reported by R. Samuel Aboab (1610-1694) in his Sefer ha-Zikhronot (Prague, c.1631-1650) on these issues.
R. Spira (d.1666), a renowned mekubal, was born in Cracow, where his father was a dayyan. He served as rabbi in several locations in Poland prior to settling in Eretz Israel, where he became rabbi of the Ashkenazic community. After the Chmielnicki massacres of 1648-1649 he went to Europe to raise funds for the Jewish communities in Eretz Israel, which suffered due to a decline in support because of the devastation in Europe. Among the communities he visited was Amsterdam, where his influence caused Menasseh ben Israel to bring the plight of Polish Jewry to Oliver Cromwell's attention. Although he returned to Jerusalem, Spira again traveled to Europe, where he died in Reggio, Italy.
Title page with frame composed of floret borders and biblical verses associated with wine.
The Vendramin Hebrew press was established in 1630 by Giovanni Vendramin, who thereby broke the monopoly enjoyed by the Bragadin family in Venice. The press eventually joined with that of Bragadin, however, and the combined presses continue to operate well into the 18th C. In this edition, the printer's name does not appear in the book. 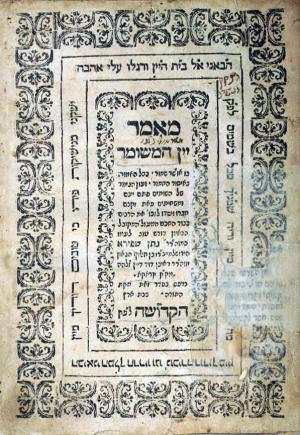