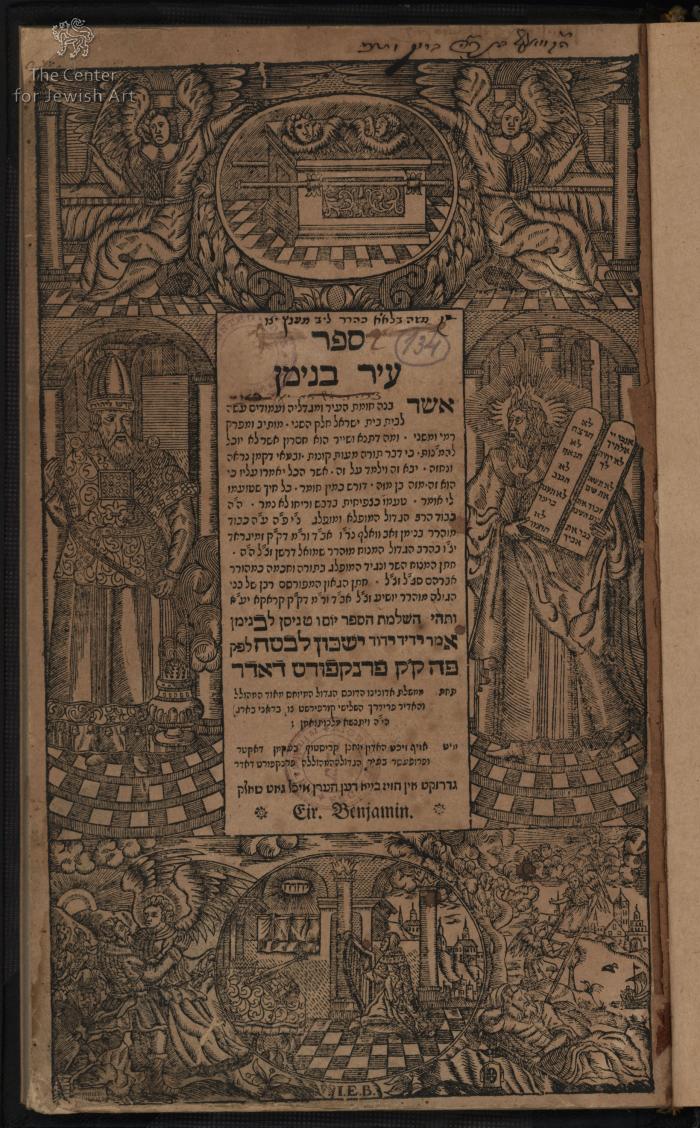 On Talmudic aggadot in the Bin Yaakav by R. Benjamin Zeev Wolf ben Samuel Romaner (d. c. 1718). Romaner, rabbi and darshan, served as av bet din, first in Semigrod and afterwards, from 1704, in Dessau. In his old age Romaner resided in Metz. The title page of Ir Binyamin, his only published title, has an ornate frame, and states that it is Ir Binyamin
Of which he built the walls of the city, its towers and pillars, that he made for a house Beit Yisrael (Bin Yaakov), part two. Objects and answers, asks and answers; and from what he "taught and left over" is a "wanting that cannot be numbered" (d. Ecclesiastes 1: 15). For "under biblical law money acquires" (Babylonian Talmud var. cit.), and that which is before is seen and looked upon, and this will come and instruct on it, so that all will say on it, that it is a "sprinkler the son of a sprinkler" (Berakhot 28a) "expounds like a jewel" (Sotah 15a), "any palate that tastes it says, [give] me" (Ketubbot 111b), "and its taste was like wafers made with honey" (Exodus 16:31), "and his scent is unchanged" (Jeremiah 48:11) ....
The book was completed on Friday, 9 Nisan, "and of Benjamin he said, 'The beloved of the Lord shall live in safety by him לבנימין אמר ידיד י' ישכן לבטח (458 = March 21,1698)'" (Deuteronomy 33:12).
The title page is followed by approbations from nine rabbis. Next is the author's introduction, in which he informs that he begins with aggadah to make known the value of learning and discoursing on it. He references the Jerusalem Talmud several times, and remarks that he was unable to fulfill his intention of printing on all of Helek. Sheni, in the places left him by R. Josiah ben Joseph Pinto (1565-1648) in his Me'or Binayim, and that even in this he was concise where he should have been lengthy, and even in quoting the Talmud he was brief, relying on the knowledge of the reader. What Romaner is referring to by Helek Sheni is the publication of the Bin Yaakav in two parts, the first as Bin YisraeZ, the second as Beit Yisrael. Part one of Pinto's commentary, on Bin YisraeZ, had been published earlier (Amsterdam, 1643), the second part was issued in Mantua, (1743) so that Romaner wrote on part two only, that is, Beit Yisrael.
The text is in two columns in rabbinic type with marginal references. It encompasses tractates Yevamat, Ketubbat, Gittin, Satah, Kiddushin, Bava Kamma, Bava Mezia, and Bava Batra. The volume concludes with an index. In the colophon he dates completion of the work to 9 Nisan, first of the months, "On the ninth day, the prince of the sons of Benjamin" (Numbers r61) offered on the completion m'::l:l (458 = 1698) of the Tabernacle; I came into the sanctuary 'lI.I'P~ l'\:ll'\ (458 = 1698).
This is the only edition of Ir Binyamin. Part II, Ir Binyamin Sheni (Feurth, 1722) on the aggadot in the Jerusalem Talmud, Orders Zera'im and Ma'ed.
Commentary on aggadot in the Talmud (which are compiled in the Ein Ya’akov), by R. Benjamin Ze'ev Wolf b. Samuel Romaner.
Romaner (d.c.1718), a rabbi and darshan, served as Av Bet Din, first in Semigrod, and later in Dessau. In his old age he resided in Metz. Ir Binyamin (in two volumes) is his only published title. This first volume encompasses tractates Yevamot, Ketubbot, Gittin, Sotah, Kiddushin, Bava Kamma, Bava Metzia, and Bava Batra. Ir Binyamin Sheni (Fürth, 1722), was written on the aggadot in the Jerusalem Talmud, tractates Zerai’m and Mo’ed.
Elaborate title page with the figures of Moses and Aaron at the sides, the Aron ha-Brit at top, and biblical scenes below: Jacob Wrestling with the Angel, King David playing his harp, and Jacob’s Dream.
Michael Gottschalk, the publisher, was a local bookbinder and bookdealer who took over the management of Johann Christoph Beckman's printing press in Frankfort d.O. in 1693. Gottschalk became the moving spirit of the press for almost four decades. His most ambitious project was a completed edition of the Talmud, printed in 1697-1699, a work for which the Frankfurt press is best known to this day. See Gross Family Collection B.1281 et al. 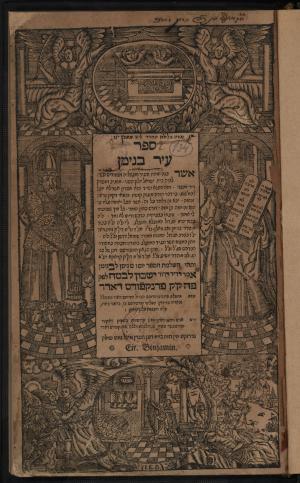 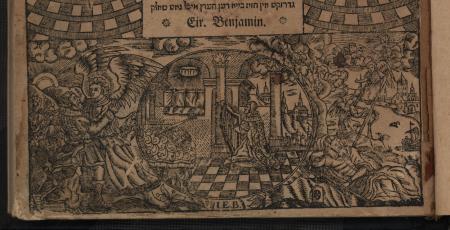