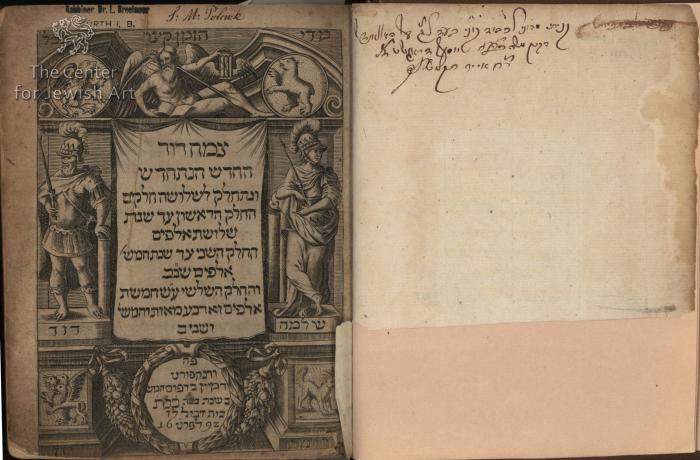 Tzemach David, Jewish and world history, three parts, by R. David Gans. Frankfurt am Main, 1692. Second edition of parts I-II, first edition of part III. Additional engraved title page, depicting King David and King Solomon, with four beasts representing the four exiles: Babylonian, Median, Greek and Roman. The first two parts are identical to those in the first edition (Prague, 1592). In this edition, a third part was added, containing the annals of the subsequent century - 1592-1692. 47, [5]; 81, 81-95, [8] leaves. 19 cm.
Historical chronicle dealing with Jewish and world history, written for laymen and young people. First printed in 1592 in Prague, this, the second edition, has been updated and made current by R. David ben Moses of Reindorf. The added part begins with the events in the time of Duke Heinrich Julius of Braunschweig in 1592, and continues for the following century. At the end of the volume is, among other texts, an account of the miracle in which the Jews of Frankfurt were delivered from the attacks on that community by Vincent Fettmilch. Title page wtih engraved copperplate frame showing Kings David and Solomon at the sides, Father Time holding an open book and hour glass (and topped by the inscription “Ha-zman katzar” [Time is short]) at the top, and beasts representing the kingdoms of Persia, Babylon, Greece and Rome in the corners. David Gans is an exceptional if ambiguous figure. Born in Westphaila, he was educated in Germany and then studied with Moses Isserles in Krakow. Unlike many of his rabbinic contemporaries, Isserles frequently based his arguments on astronomy, mathematics and philosophy Thus it was undoubtedly through Isserles’ intellectual influence that Gans became interested in “external wisdom,” the secular sciences that were frowned upon in traditional Jewish circles.
Later Gans moved to Prague, where he became acquainted with the astronomers Johannes Kepler and Tycho Brahe and corresponded with Regiomantanus.
Gans’ fame rests on this popular historical chronicle Tzemach David. In the introduction he defines his intended audience, “I have not written my book for sages and scholars filled with Torah, but for ordinary householders and young people.” The chronicle covers both Jewish and general history.
Gans died in 1613. His tombstone, which is still standing in the old Jewish cemetery in Prague, states simply, “Here lies the pious David Gans, author of Tzemach David.” It makes no mention of his scientific accomplishments. 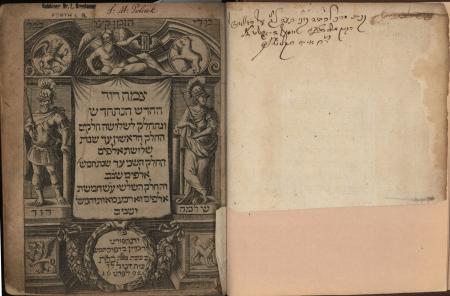 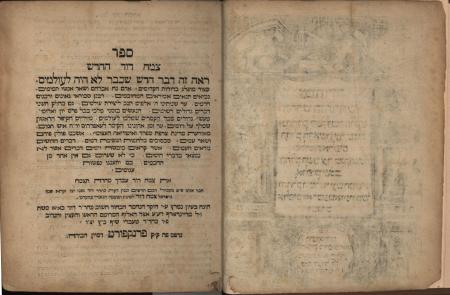 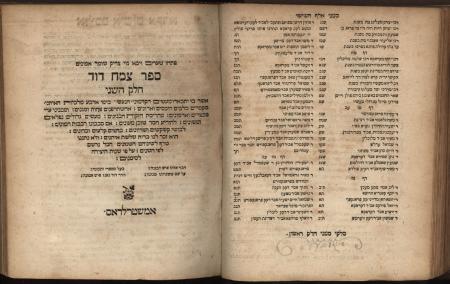 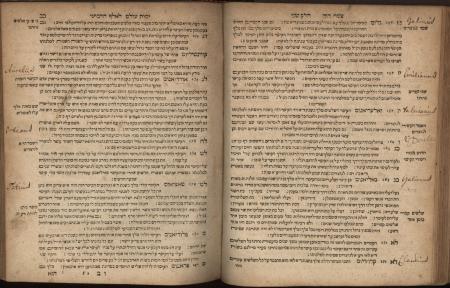 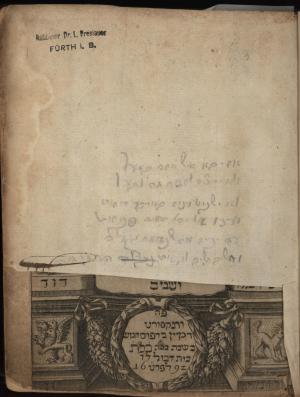