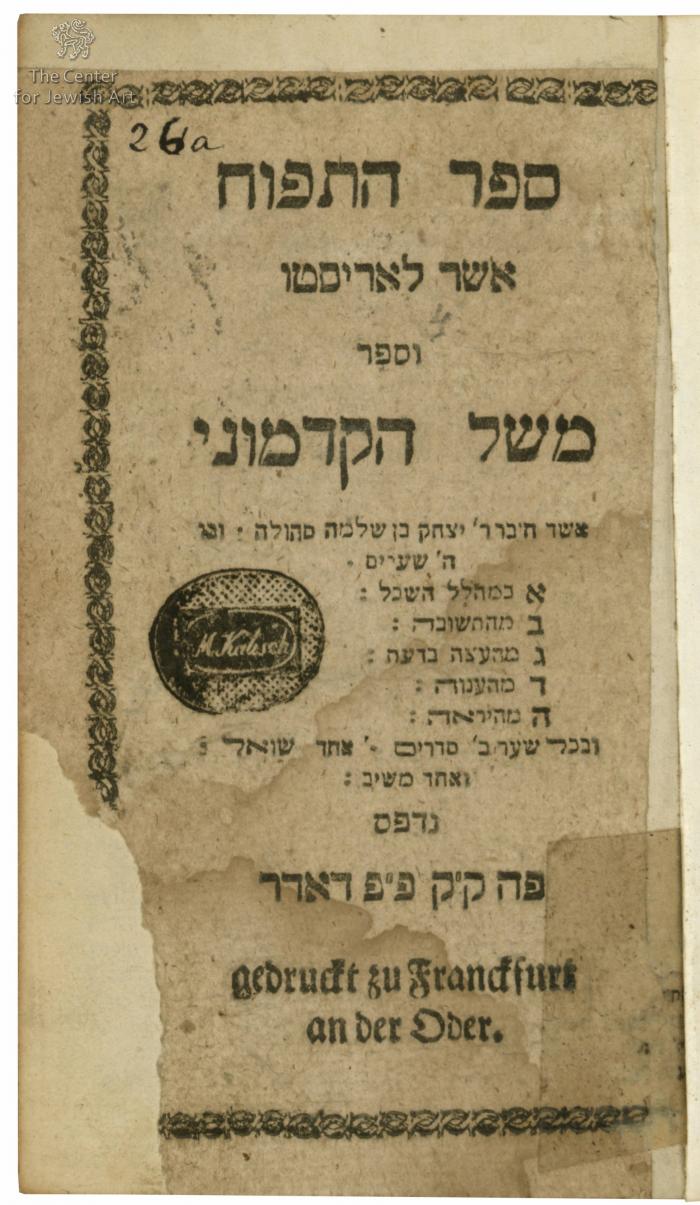 Meshal ha-Kadmoni is an illustrated collection of moral fables and animal stories, regarded as the Jewish Aesop’s Fables. This delightful collection of stories shows non-Jewish influences both in its content and in its presentation. Each fable is accompanied by an illustration. Many of the illustrations are repeated, being employed for more than one parable.
Little is known about the book’s author, R. Isaac ben Solomon ibn Abi Sahula, except that he was a scholar and poet born in Guadalajara (Castile), a student under the kabbalist R. Moses of Burgos, and wandered about for much of his life. It is surmised, from his many references to the nature of diseases and their cures, that he was a physician.
Sahula began to write Meshal ha-Kadmoni in c. 1281, out of a desire to offer the Jewish reader a collection of stories and aphorisms from Jewish literary tradition and frame of reference. It is comprised of 79 parables in which the author and an adversary debate the value of moral virtues, both of them employing parables and animal fables to support their positions. It is the animals who speak, discoursing on scientific and philosophic issues, making use of biblical verses and Talmudic passages. And wondrous animals they are indeed: each is well-versed in the art of Talmudic discourse, including matters of science, morality and philosophy.
First printed in Brescia (c. 1491), Meshal ha-Kadmoni has been reprinted several times and translated into Yiddish. It has also influenced other works and been borrowed from by, for example, the Kuchbuch. It is the first work to quote the Zohar.
Meshal ha-Kadmoni is one of the earliest Hebrew books to contain numerous illustrations. This pictorial component is in fact so integral to the book, that all printed editions, from the first edition to those of the twentieth century, have included woodcuts of fabulous animals. Sahula himself even makes references to them at the end of the volume: “And in order that my Meshal ha-Kadmoni should please the children too and be loved by them, and that they should eagerly read my stories, I have adorned them with beautiful pictures and illustrations.”
This is one of four editions of this book in the Gross Family Collection. Two other editions from the same city are B.403 and B.2065, and are, respectfully, the first two editions of Meshal haKadmoni to be printed in Frankfurt d.O.
Meshal ha-Kadmoni is a delightful illustrated book of moral fables and animal stories written in the 13th century by Yitzhak ben Shlomo Abi Sahula (b. 1244), a well-known Spanish Hebrew poet, scholar, physician and Kabbalist. This book was his major work, written between 1281 and 1284. The tome is often referred to as the Jewish Aesop’s Fables. His purpose was to present a literary form that was popular in the non-Jewish world in the framework of Jewish literary tradition. There are 79 parables encompassing debates about moral virtues with the participants marshalling Biblical verses and Talmudic passages in the texts about the issues. There is also material from the fields of philosophy and science in addition to Kabbalistic overtones. All of this contributes to the goal of moral lessons in allegorical form.
Meshal ha-Kadmoni was a very popular treatise; there appeared some 20 printed editions up to the middle of the 19th century after the first printing in Brescia in 1491. That incunable edition is known in only two surviving copies. This edition is the 2th printed publication of the text. The book was also printed in Yiddish a number of times, the first being from Frankfurt an der Oder in 1693.
In both the manuscript versions and the printed books there appear illustrations accompanying the parables. In this regard, Sahula writes at the conclusion of the text that he included illustrations to make the stories interesting for children as well as adults. The illustrations are finely executed woodcuts by an unknown artist. All the printed editions from the first to contemporary publications employ such pictures. These images are truly an integral part of the composition. While non-Jewish printed books often contained multiple illustrations, Hebrew printing up to this time utilized them sparingly. This book is one of the earliest Hebrew prints to contain such a large number of illustrations, some 80 in number. 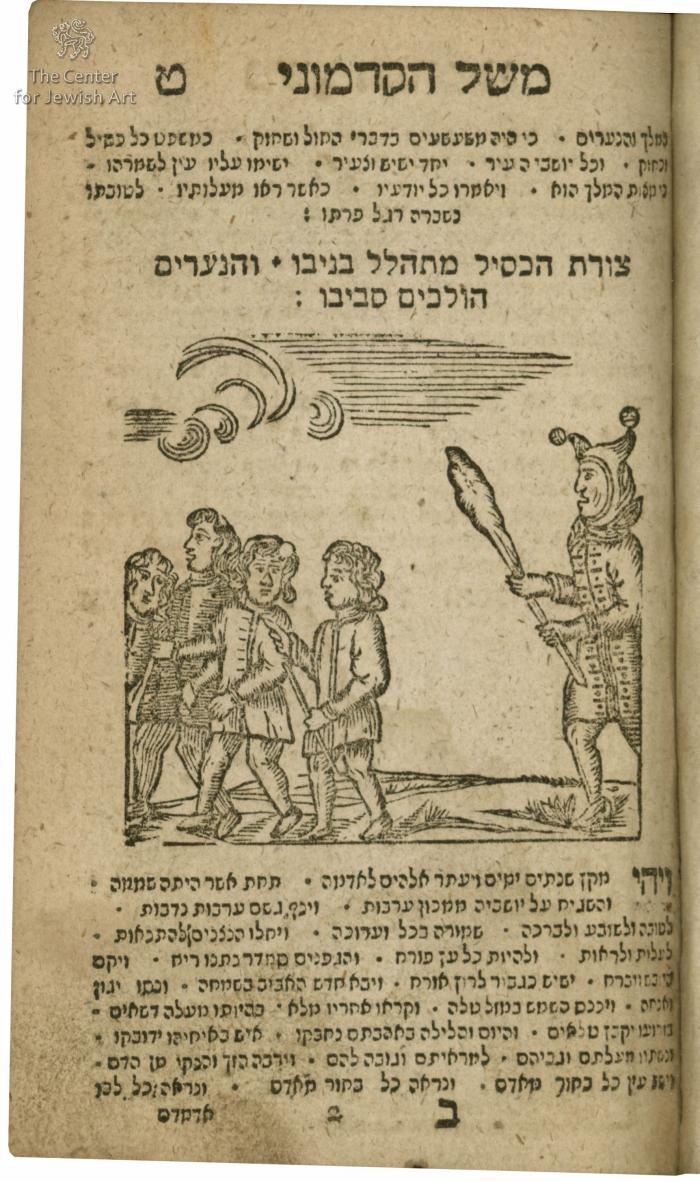 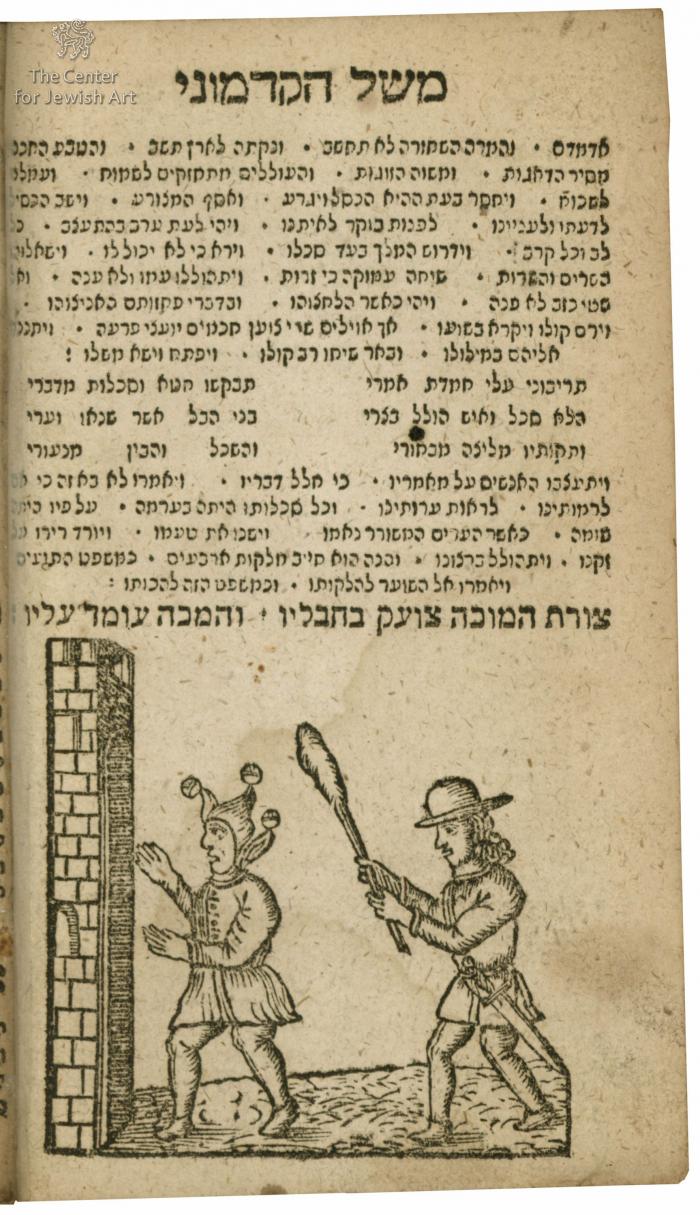 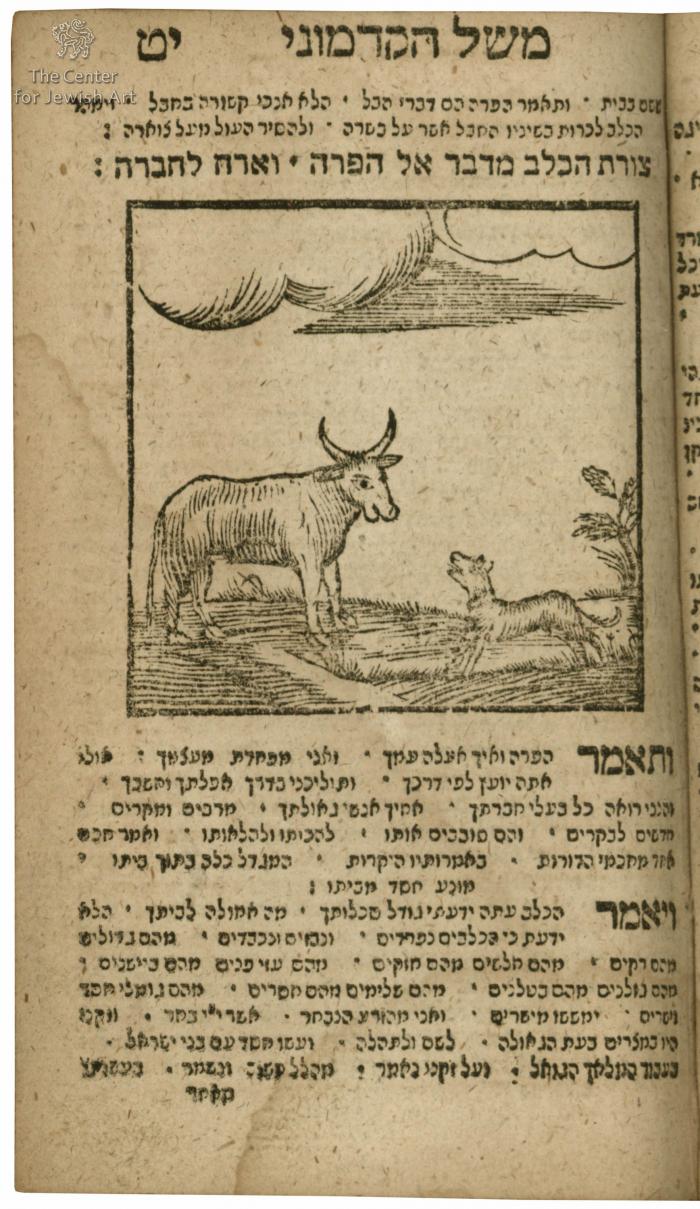 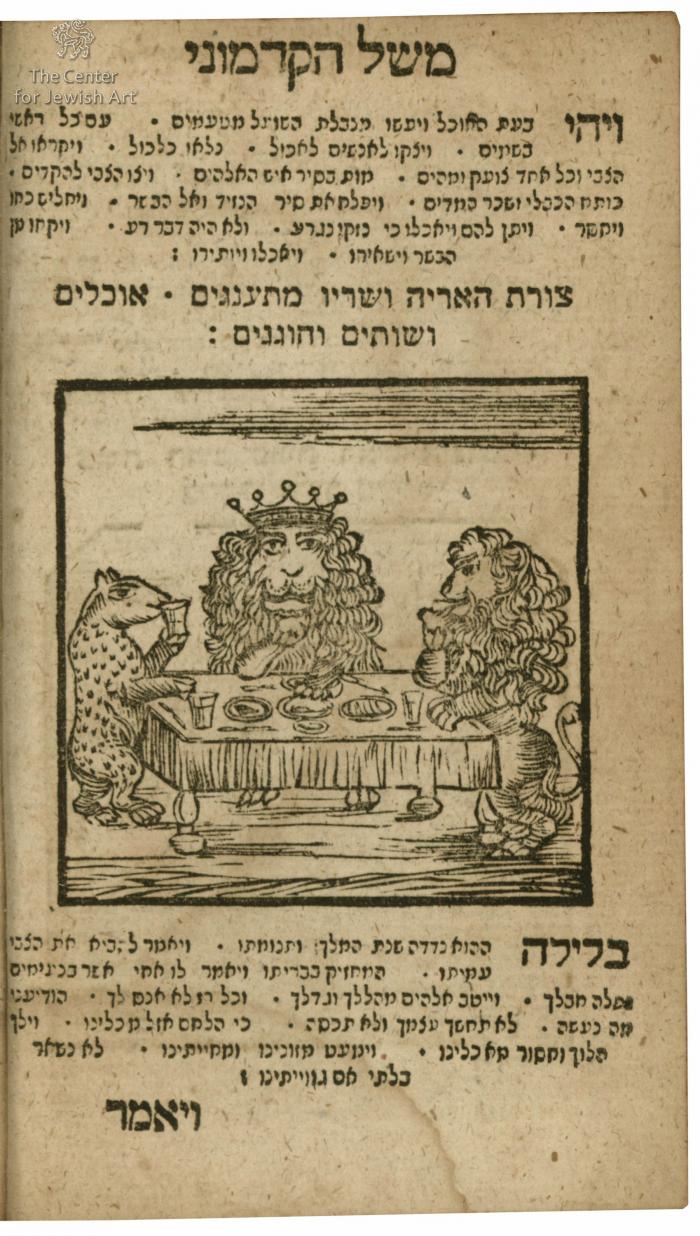 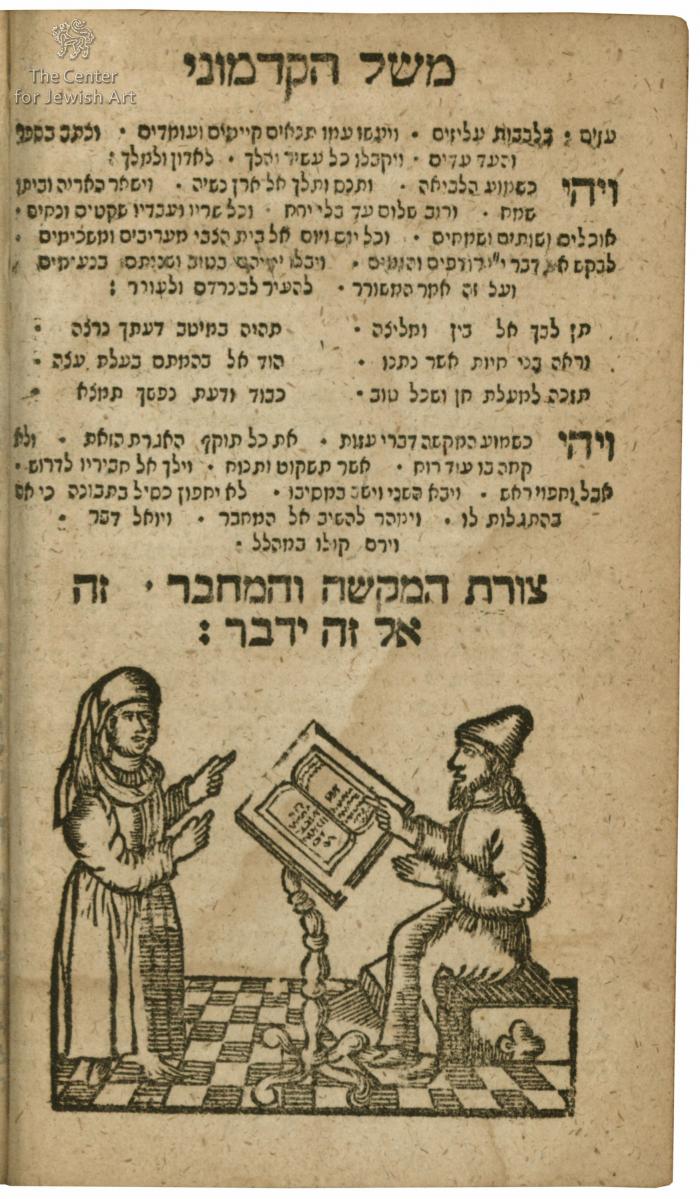 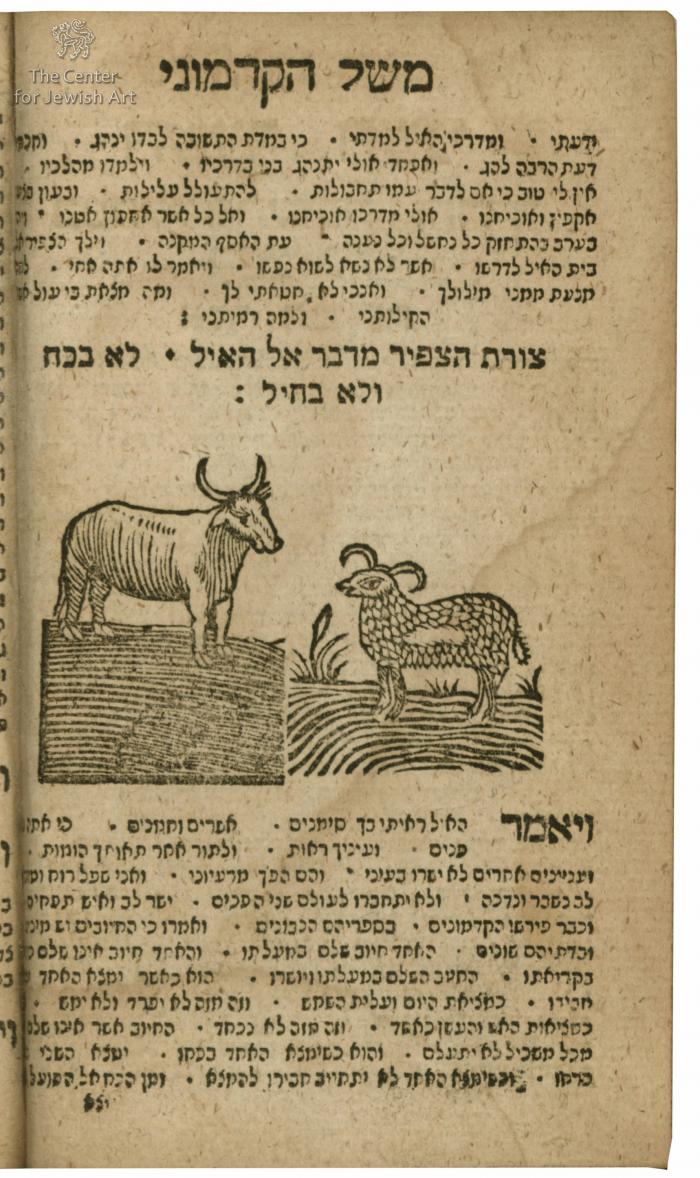 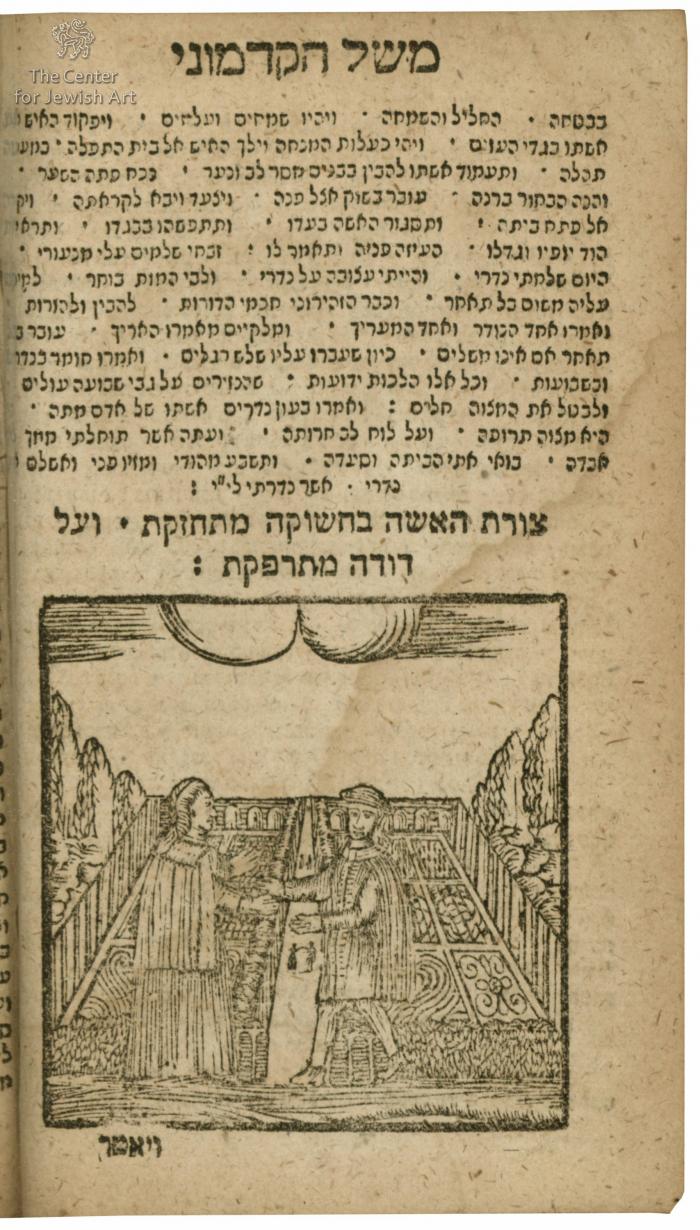