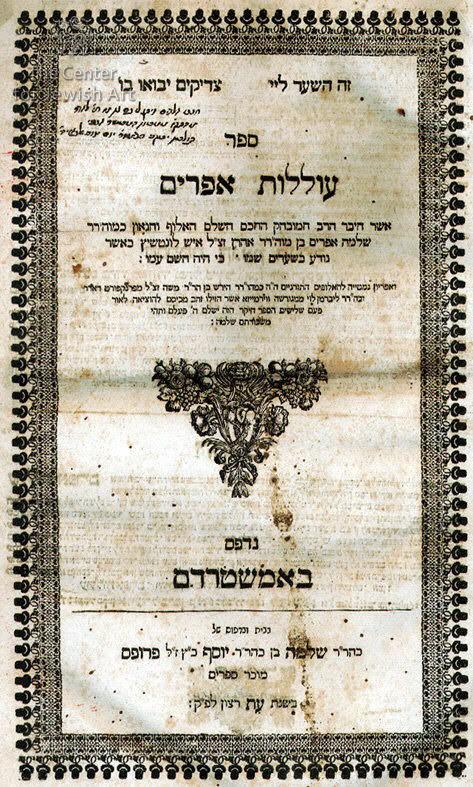 Many books of sermsons were published with the words of famous Rabbis. Shlomo Ephraim ben Aaron Luntschitz (1550 – 1619) was a rabbi and Torah commentator, best known for his Torah commentary Keli Yekar. He served as the Rabbi of Prague from 1604 - 1619. He was born in Lenczyk (also known as Luntschitz) and studied under Solomon Luria in Lublin, and subsequently served as rosh yeshiva (dean) of the yeshiva in Lvov (Lemberg). In 1604 he was appointed rabbi of Prague, a position he filled until his death. In the introduction of his Keli Yekar he relates that the name Shlomo was added to his name during life-threatening illness, a common practice in Judaism.
Luntschitz is best remembered for his homiletical work, most prominently Keli Yekar ("precious vessel", an allusion to Proverbs 20:15) on the Torah which first appeared in Lublin in 1602, is still printed in many editions of the Pentateuch and continues to be highly popular.
He composed two penitential prayers in commemoration of the 1611 pogroms that hit Prague on the 2nd of Adar on the Jewish calendar.
In addition he wrote:
Ir Gibborim ("city of strong men", cf. Proberbs 21:22), comprising Petichot u-Shearim ("openings and gates") and two works of Torah homilies. It was first published in Basel in 1580. Olelot Ephraim ("grapes of Ephraim", a reference to Judges 8:2), four volumes of sermons published in Lublin 1590. Ammudei Shesh ("pillars of marble", Esther 1:6), sermons (Prague, 1617).[2] Siftei Da'at ("words of wisdom", also Proverbs 20:15), a continuation of Keli Yekar in style and reach, Prague 1610. Orach le-Chayyim ("a path for life", Proberbs 10:17), sermons for Shabbat Shuvah and Shabbat ha-Gadol, Lublin 1595. Rivevot Efraim ("myriads of Ephraim", Deuteronomy 33:17), not extant but mentioned in the introduction of Orach le-Chayyim.
The press set up by Solomon Proops became the most famous of all the presses operating in Amsterdam in the 18th century, apart from the Menasseh ben Israel press. Solomon's father Joseph came to Amsterdam from Poznan. Solomon Proops was initially involved in the bookselling trade, and in 1677 was admitted to the Amsterdam Guild of Booksellers, Printers and Bookbinders. In 1704 he set up his own press, which was to become the longest operating and most productive of all the Jewish presses in Europe in the 18th C. He acquired the fame of a printer who produced beautiful books that could be bought at a reasonable price. 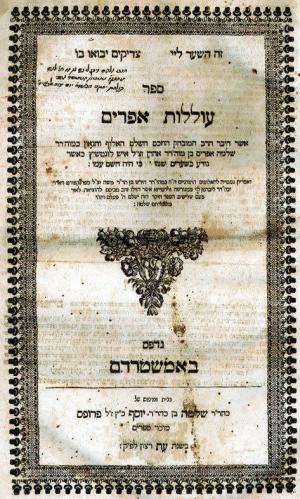