"Sefer Nitzachon", by Rabbi Yom Tov Lipmann Muhlhausen. Amsterdam, [1709]. Anti-Christian polemic book, edited and arranged according to Torah portions and Bible books. End of book contains responses of the Radak to Christians. The preceding publication of this edition was printed by Christians in Altdorf and Nierenberg in the year 1644, with the addition of a Latin section which contains a lengthy essay in opposition of Judaism. This is the first edition of the book printed by Jews.
This book is the second edition of Nitzachon. Yom-Tov Lipmann ben Solomon Muhlhausen (Hebrew: יום טוב ליפמן מילהאוזן) (Yom-Tov was his religious given name, Lipmann was his secular given name, one of the traditional Ashkenazic vernacular equivalents for Yom-Tov, while his last name represents a nickname indicating the origin of either him or his ancestors from the town of Mhlhausen, in Thuringia) was a controversialist, Talmudist, kabalist and philosopher of the 14th and 15th centuries (birth date unknown, died later than 1420). His religious and scholarly career and influence spanned the Jewish communities of Bohemia, Poland, Austria and various parts of Germany, and his dispute with the principles of Christianity left a lasting imprint on the relations between Christianity and Judaism.
There is no comprehensive account of his life and career, which must be reconstructed from fragmentary references. According to Stephan Bodecker, Bishop of Brandenburg, who wrote a refutation of Lipmann's Niẓẓaḥon, Lipmann lived at Cracow. But Naphtali Hirsch Treves, in the introduction to his Siddur, calls him "Lipmann Mülhausen of Prague", adding that he lived in the part of the town called "Wyschigrod." Manuscript No. 223 in the Halberstam collection contains a document issued at Prague in 1413 and signed by Lipmann Mülhausen, as dayyan.
It is seen from his Niẓẓaḥon that, besides his rabbinical studies, Lipmann occupied himself with the study of the Bible, that he was acquainted with Karaite literature, that he read the New Testament, and that he knew Latin. His authority in rabbinical matters is shown by his circular to the rabbis warning them against the use of any shofar not made of a ram's horn (comp. S.D. Luzzatto in Kerem Ḥemed, vii.56). There are also responsa addressed to him by Jacob ben Moses Mölln (A. Neubauer, Cat. Bodl. Hebr. MSS. No. 907, 5), and Israel Isserlein mentions him (Terumat ha-Deshen, No. 24) as one of five scholars who met at Erfurt. On 16 August 1399, Lipmann and many other Jews were thrown into prison at the instigation of a converted Jew named Peter, who accused them of insulting Christianity in their works. Lipmann was ordered to justify himself, but while he brilliantly refuted Peter's accusations, as a result of the charges seventy-seven Jews were martyred on 22 August 1400, and three more, by fire, on 11 September 1400. Of the accused Lipmann alone escaped death.
Very characteristic is Lipmann's refutation of the assumed miraculous birth of Jesus, as well as his demonstration of the falsity of the conclusions of the Christians who claim that the birth of Jesus was foretold by the Prophets. He constantly quotes Maimonides, Abraham ibn Ezra, Naḥmanides, Saadia, Rashi, Shemariah of Negropont, and other ancient scholars. Lipmann must have written his Sefer ha-Niẓẓaḥon before 1410, for he expressed a hope that the Messiah would arrive in that year (§335). It was first published by Hackspan (Altdorf, 1644), who seized the manuscript from the rabbi of Schneittach (Goldwurm 2001, p. 152). Wagenseil published, at the end of his Sota (Altdorf-Nuremberg, 1674), corrections of Hackspan's edition under the title of Correctiones Lipmannianæ.
Later, the Niẓẓaḥon was reprinted, with the addition of Ḳimḥi's Vikkuaḥ, in Amsterdam (1709 and 1711) and Königsberg (1847). Sebald Snelle published the Hebrew text with a Latin translation and refutation of the paragraph (§8) denying the miraculous birth of Jesus (Altdorf, 1643), and at various dates he published Latin translations of the paragraphs directed against Christianity. A Latin translation of the whole work, with the exception of the passages taken from the Pentateuch, was made by Johann Heinrich Blendinger (Altdorf, 1645). As will be readily understood, the work gave rise to many polemics and called forth replies from Christians. The first was Stephen Bodecker, Bishop of Brandenburg, a younger contemporary of Lipmann, who wrote a refutation of the Niẓẓaḥon (comp. Wolf, Bibl. Hebr. i.736). The following other refutations are published: Wilhelm Schickard, Triumphator Vapulans sive Refutatio, etc. (Tübingen, 1629); Stephen Gerlow, Disputatio Contra Lipmanni Nizzachon (Königsberg, 1647); Christian Schotan, Anti-Lipmanniana (Franeker, 1659), giving also the Hebrew text of the Niẓẓaḥon. Informally, Anti-Lipmanniana came to be used also as an overall term for the entire corpus of Christian writings debating with and seeking to refute Lipman's arguments.
The press set up by Solomon Proops became the most famous of all the presses operating in Amsterdam in the 18th century, apart from the Menasseh ben Israel press. Solomon's father Joseph came to Amsterdam from Poznan. Solomon Proops was initially involved in the bookselling trade, and in 1677 was admitted to the Amsterdam Guild of Booksellers, Printers and Bookbinders. In 1704 he set up his own press, which was to become the longest operating and most productive of all the Jewish presses in Europe in the 18th C. He acquired the fame of a printer who produced beautiful books that could be bought at a reasonable price.
110 leaves
A polemic against Christianity by Rabbi Yom Tov Lipman Muhlhausen. Arranged in the order of the portions of the Torah and books of the Bible. With Teshuvot HaRadak L'Notzrim.
Specifications: 110 leaves, 12 cm.
Unique Features: A historically important book printed as a response to the Christian attacks in the book Tela Ignea Satanae [The Fiery Darts of Satan]. The first edition of the book printed by Jews, without the sections written by Christians against Judaism. As written on the title page: Reprinted to fulfill the desire of those who want to find words to beat and silence those who speak negatively about G-d and His messiah, in a manner that anyone who reads this book will know what to respond. 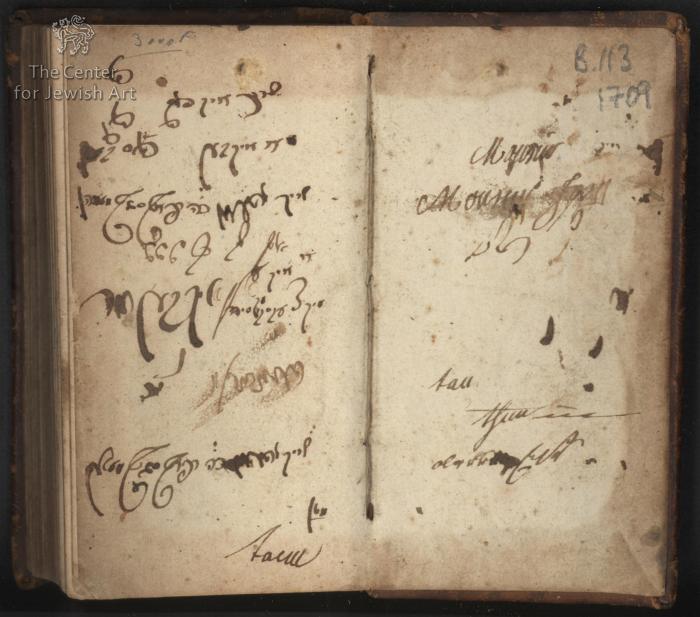