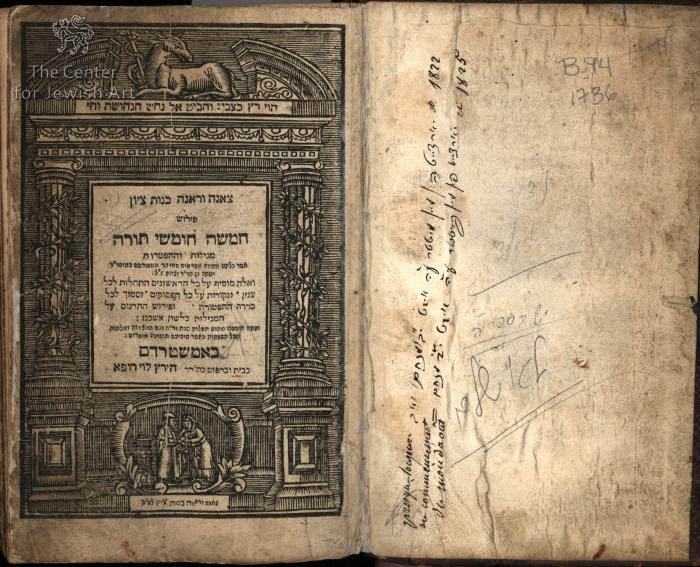 Most Jewish women of the 17th and 18th centuries were unable to read Hebrew, but were familiar with Yiddish. At the same time almost all editions of the Bible were published in Hebrew. There arose a popular literature of Bible stories for women in the Yiddish language. This book was named "Tzeena u-Reena" and was published in many editions, particularly in Southern Germany.
This book is a miscellany of Midrashic tales and exegetical commentary, woven around a Yiddish rendering and paraphrasing of the Chumash, Haphtaroth and the Megillot. The Tzeena u-Reena is the most renowned Yiddish work of homiletical prose and has been particularly beloved by generations of Jewish women. Written in a lucid, flowing style, the numerous editions issued over time has resulted in that the text of the book has become a laboratory in researching the development of the Yiddish language.
The book was often illustrated with charming woodcuts to keep the interest of the readers although this edition does not contain images with the exception of the titlepage. This woodcut on the titlepage is a rather crude copy made after a much finer model published in Germany.
Naftali Hertz ben Alexander Ziskind Levi Rofe of Emden set up his press in Amsterdam in 1726. He complemented his printing equipment with that purchased from the Isaac Templo press after it was closed down. He was a physician by profession, as evidenced by his moniker Rofe. He was granted title of doctor of medicine from the University of Harderwijk in 1716. He pursued his medical practice, as well as printing and bookselling. He was a member of a small group of Jewish intellectuals interested in scientific disputes. He tended to publish alone as well as in cooperation with others, but above all with his son-in-law Kosman ben Joseph Baruch, who was also involved in the book trade. Their cooperation lasted from 1742 to 1766, and resulted in many works being published. Kosman eventually ceased printing with his father-in-law, and continued instead with his son (the Gross Family Collection also preserves some of Kosman’s publications).
EJ; M. Erik, Geshikhte fun der Yidisher Literatur (1928), 223–30; Milly Heyd, “Illustrations in Early Editionms of the tsenbe-u’Rene”, Jewish Art X 1984 pp. 64-86; JE; Ch. Lieberman, in: Yidishe Shprakh, 26 (1966), 33–38; 29 (1969), 73–76; Ch. Shmeruk, in: For Max Weinreich on his Seventieth Birthday (1964); 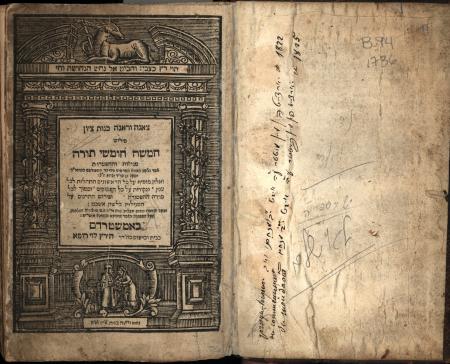