Yosifon is a chronicle of Jewish history from Adam to the age of Titus believed to have been written by Yosifon or Joseph ben Gorion. Yosifon was compiled in Hebrew early in the 10th century by a Jewish native of south Italy. The first edition was printed in Mantua in 1476. The book subsequently appeared in many forms, one of the most popular being in Yiddish, with quaint illustrations. Though the chronicle is more legendary than historical, it is not unlikely that ancient sources were used by the first compiler. The book enjoyed great popularity in England. In 1558, Peter Morvyn translated an abbreviated version into English, and edition after edition was called for. Lucien Wolf has shown that the English translations of the Bible aroused so much interest in the Jews that there was a widespread desire to know more about them. This led to the circulation of many editions of Josippon, which thus formed a link in the chain of events which culminated in the readmission of the Jews to England by Oliver Cromwell. The Ethiopic version of Yosifon is recognized as canonical by the Ethiopian Orthodox Church.
The work is ascribed to Joseph ben Gorion (יוסף בן גוריון), a Jew living in southern Italy in either the 9th or the 10th century. As the Muslim writer ibn Hazm (d. 1063) was acquainted with the Arabic translation by a Yemenite Jew, Daniel Chwolson proposes that the author lived at the beginning of the 9th century.
The author professes to be the old Jewish-Roman historian Flavius Josephus, giving to the name "Joseph" the Greek ending "on" ("Josephon," "Joseppon," or "Josippon". His Arabic name "Yusibus" is, according to Wellhausen, identical with "Hegesippus"). A gloss gives the form from the Italian, "Giuseppe." Trieber held the singular view that the author lived in the 4th century, and derived much of his material from Hegesippus.
Commencing with Adam and the geographical conditions of the first millennium, the author passes to the legendary history of Rome and Babylon, to the accounts of Daniel, Zerubbabel (according to the Apocrypha), the Second Temple, and Cyrus, and to the histories of Alexander the Great and his successors. He then gives the history of the Jews down to the destruction of the Temple. The last part contains, among other things, a brief history of Hannibal and an account of the coronation of an emperor, which, according to Basnage[1] refers to that of Otto the Great (crowned 962); this would be the only and a most valuable source of information concerning this event. If Basnage's conjecture is correct, the date of the composition of the "Yosippon" may be placed at the end of the 10th century. "Yosippon" is written in comparatively pure Biblical Hebrew, shows a predilection for certain Biblical phrases and archaisms, and is rich in poetical passages and in maxims and philosophical speculations.
As indicated on the title page, the printers Naftali Hertz Levi Rofe and Kosman ben Yosef were father-in-law and son-in-law. Naftali Hertz ben Alexander Ziskind Levi Rofe of Emden set up his press in Amsterdam in 1726. He complemented his printing equipment with that purchased from the Isaac Templo press after it was closed down. He was a physician by profession, as evidenced by his moniker Rofe. He was granted title of doctor of medicine from the University of Harderwijk in 1716. He pursued his medical practice, as well as printing and bookselling. He tended to publish alone as well as in cooperation with others, but above all with his son-in-law Kosman ben Joseph Baruch, who was also involved in the book trade. Their cooperation lasted from 1742 to 1766, and resulted in many works being jointly published, includig the current volume. Kosman eventually ceased printing with his father-in-law, and continued instead with his son.
Original binding, illustrations 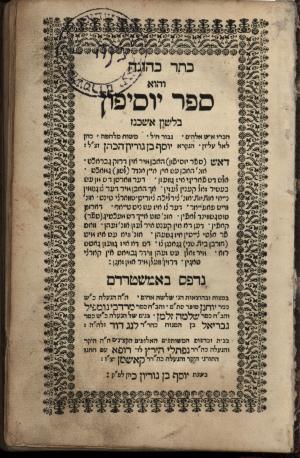 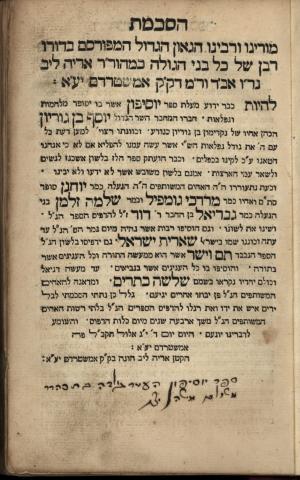 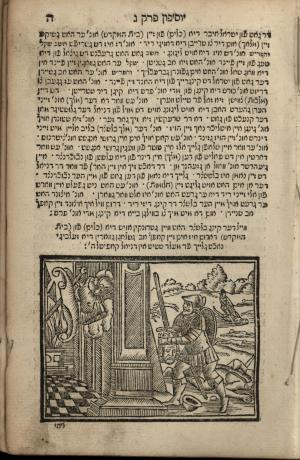 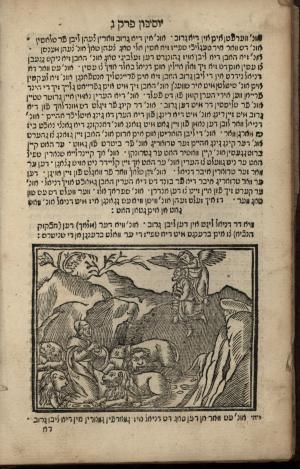 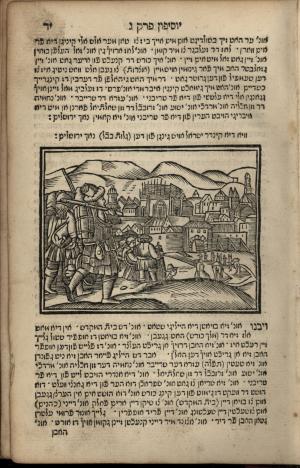 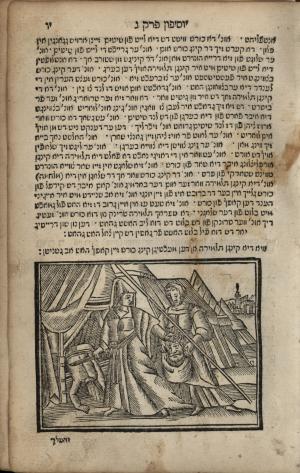 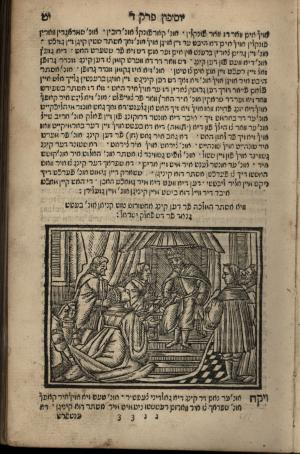 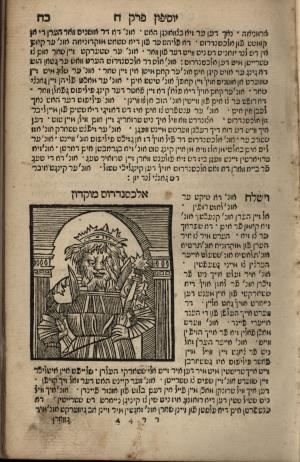 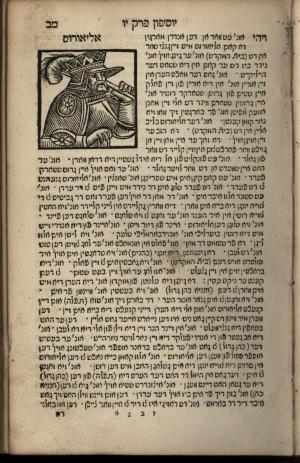 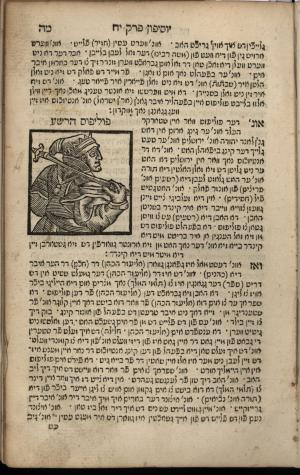