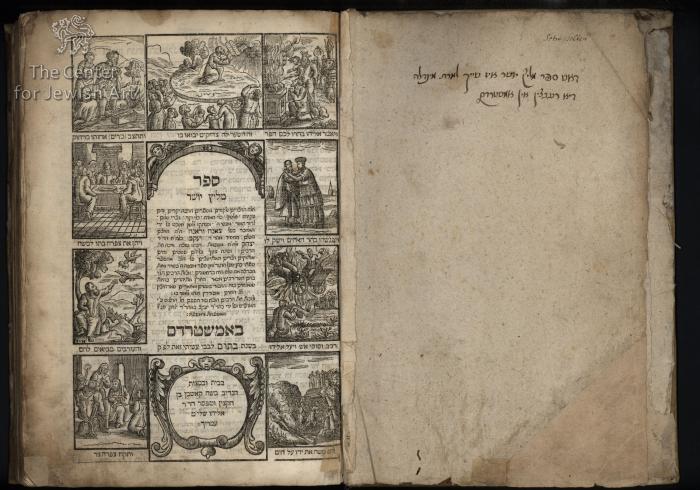 “Melitz Yosher (Tzena Ure’ena):” Explanations on the Weekly Torah Portions; Amsterdam, 1688. Printed for Women in Yiddish. Explanations on the weekly Torah portions from the Alshich, Kli Yakar, Baal Ha’akeida and others, compiled by Rabbi Yaakov ben Rabbi Yitzchak of Yaniv, author of Tzena Ure’ena, printed in Yiddish.
The first edition of Tzena Ure’ena was published in Lublin, 1622. This edition includes several new explanations from Rabbi Elyakim Shotz of Komarna.
The title page is illustrated with nine miniature drawings depicting various Biblical scenes of Moshe Rabbeinu and Eliyahu Hanavi. Some of the drawings emphasize the role of women, such as: “And Miriam, his sister, stood from afar” and "Tzippora took a rock.”
Published in Amsterdam, 1688.
Endorsement from the rabbis of Amsterdam follows the title page.
[1], 76 leaves | 30 cm
Most Jewish women at the end of the 17th century did not know Hebrew, but many could read Yiddish, which used Hebrew letters. This is a volume published in Amsterdam for the market of such European Jewish women, and is written in an everyday version of the Yiddish sponken by Ashkenazi women. The book contains additions and supplements to the Tze’ena u-Re’ena of R. Jacob b. Isaac Ashkenazi of Janow. Melitz Yosher is, like the Tze’ena u-Re’ena, a Yiddish paraphrase of the weekly Torah readings interwoven with homilies. However, unlike the better-known work, which also encompasses Megillot and Haftarot, Melitz Yosher is only on the weekly Torah readings. In contrast to the popularity of Tze’ena u-Re’ena, which has gone through hundreds of editions, Melitz Yosher was only published twice, this being the last printing of this work.
The nine biblical illustrations on the title page are taken from the stories told within. Since the woodcuts present scenes from the stories of the Melitz Yosher book and are not related to the Selichot (printed by Kosman in the same year, and bearing an almost-identical frame), it would appear that this volume was the first of the two to be issued.
Moses Kosman was a businessman in Amsterdam with several enterprises. He established a Hebrew press in 1688, but soon determined that he had insufficient time for publishing, and that the international printing business was more complex and less rewarding than he had anticipated. He sold the business to Moses b. Avraham Avinu in 1689 after printing only two books. The volume is also one of those two. Both used essentially the same woodcuts for the decoration of their title pages.
The book is bound in its original parchment binding and bears an inscription in an elegantly-scripted Yiddish which reads. "This book, ‘Melitz Yosher’, belongs to Mindele, the rabbi's wife in Amsterdam".
77 pp. 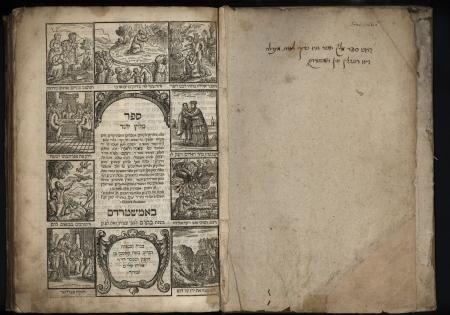