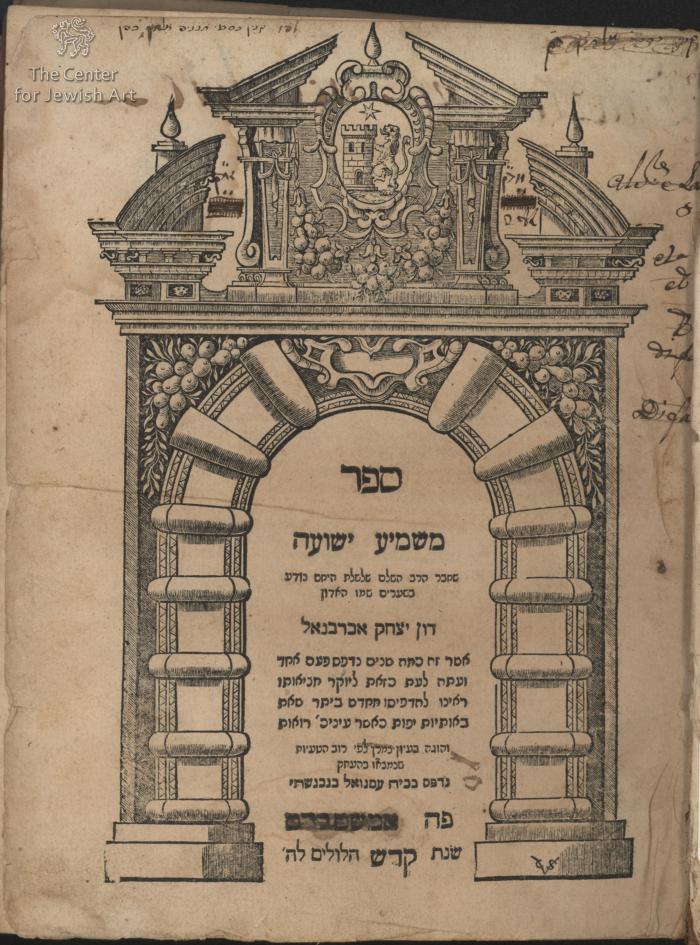 A commentary on the messianic prophecies in the prophetical books. It is the third of three volumes by Abarbanel that comprise a larger work entitled “Migdal Yeshu'ot”. The other two are: Ma'yanei ha-Yeshu'ah (“The Wellsprings of Salvation" מעייני הישועה), a commentary on the Book of Daniel; and Yeshu'ot Meshicho (“The Salvation of His Anointed" ישועות משיחו), an interpretation of rabbinic literature about the Messiah.
Title page with decorative archway topped by a broken pediment. Cartouche at top center shows the publisher's device.
Rabbi Don Isaac ben Judah Abravanel (Abarbanel) was a Portuguese rabbi, scholar, Bible commentator, philosopher, and statesman. Born in Lisbon, Portugal, he studied Talmud, philosophy, and secular studies. He was one of the first Jewish scholars to be influenced by Renaissance writers, and was a major thinker and prolific Jewish scholar. In three treatises, he predicted that the Messiah would come in the near future.
Abarbanel is best-known, however, for his brilliance as a financier and as a diplomat. His political career started in Portugal, where he served as the personal agent of King Alfonso V. As treasurer, he took the unusual position of frequently using his own monies as well as the state's. In 1471, when 250 Jews were held for ransom by Alfonso, Abarbanel helped raise the required monies. He was tremendously influential among the wealthy Christians in Portugal and remained a powerful figure in the Portuguese court. However, with the accession of John II in 1481, anti-Jewish sentiments in the church and the legislature which were suppressed during the reign of his father found a sounding board. R. Abarbanel was almost executed, but managed to sneak over the border into the Spanish town of Segura de la Orden in 1483. The following year King Ferdinand invited him to be the collector of royal revenues, even though it was illegal for a Jew to hold such a high position and the Spanish Inquisition was in full swing. After having provided Ferdinand and Isabella with the monies needed to take Grenada, Abarbanel was shocked to learn that they had decided to expel all Jews from Spain. He (and maybe Abraham Senior) offered a huge bribe to rescind the edict, but they failed.
In May, 1492, Abarbanel found himself under tremendous pressure to convert and retain his status in the Spanish court. He refused, managed to smuggle his young son out of the country, and headed for Naples. He was permitted to take a thousand gold ducats with him, and was also able to get bills of exchange for much of his fortune, softening the financial blow of his departure.
In Naples, he planned to concentrate on writing his commentary to the Bible. However, he was again employed by the king to be the prime tax collector. He and the king had to flee from the French. Abarbanel lost his library. He finally settled in Venice in 1503.
Immanuel Benveniste (also known as Manuel Benveniste) (Venice 1608 - Amsterdam c.1660) was one of a number of notable Portuguese Jewish printers at Amsterdam in the seventeenth century (the others being Manasseh ben Israel, David de Castro Tartas, and Joseph and Immanuel Athias). Little is known of his antecedents, although the Benviniste family is believed to have been among the Jewish refugees from Spain or Portugal. He came to Amsterdam via Venice (which explains why he signed his name in the Italian form), apparently already an accomplished printer. Benveniste printed many Hebrew works, including an edition of the Talmud from 1644-48
Benveniste’s printer’s device (which may have been the family escutcheon), seen at the top of this book's title page, shows an upright lion facing a tower with a star above. Apparently, later printers often “borrowed” this mark for various reasons. The first to do so were Ben Judah ben Mordecai of Posen and Samuel ben Moses ha-Levi, Ashkenazic printers who had previously worked for Benveniste. In their case, Benveniste presumably allowed them to use the mark, perhaps as a show of support for his former employees. 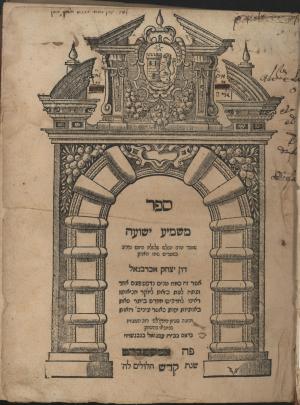 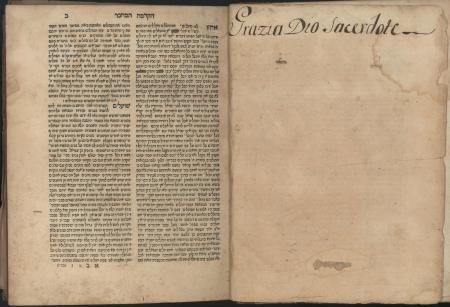 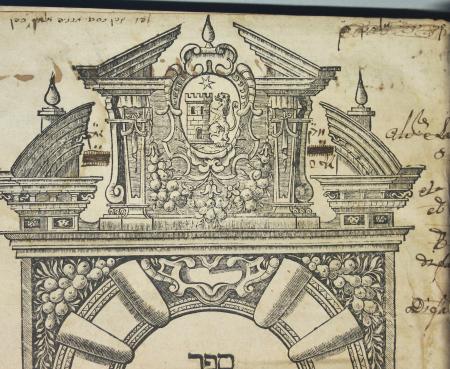 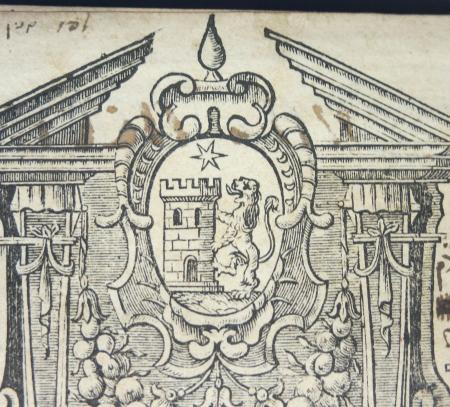