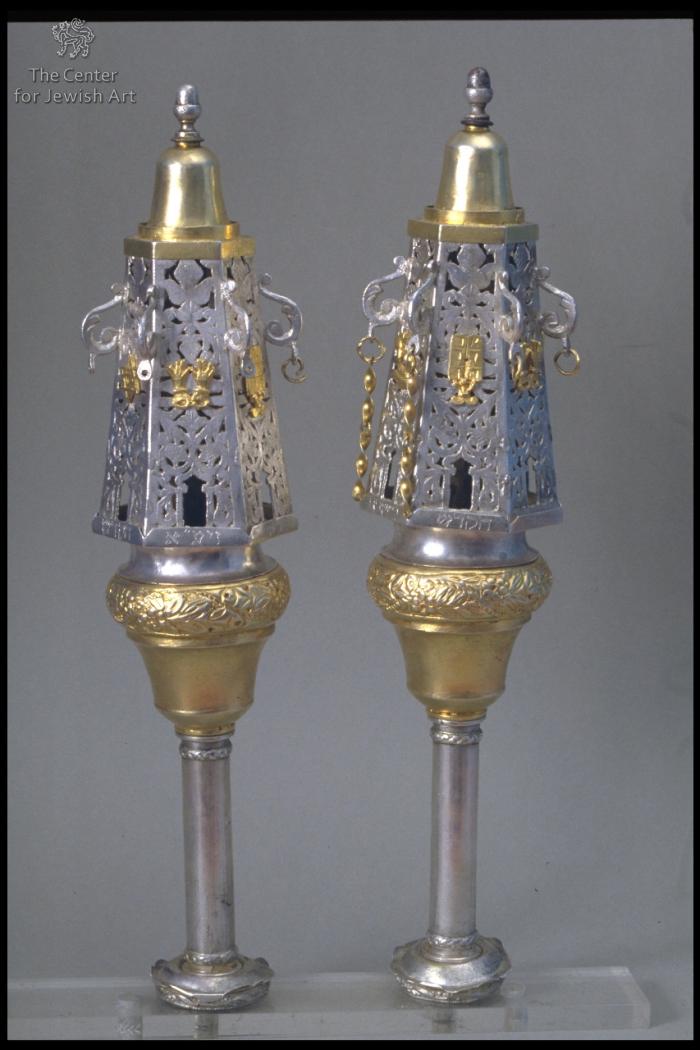 The tower shaped Torah finial consists of a shaft, a body and an apex.

The cylindrical shaft is mounted over a raised base with petal-like edges, and is decorated with a floral pattern. Two thin rope-like rings encircle the top and bottom of the shaft.

The tower shaped body is mounted over a goblet shaped base and comprises of two tiers, topped by a gilded bell-shaped dome.

The base is surmounted by a convex ring encircled with a curved branch and flowers, topped by a concave ring.

The hexagonal body tapers upwards. Each facet is formed by intertwined scrolled branches, and is divided into two tiers by a band on which a different Sanctuary Implement is attached. The lower tier has an ogee arched opening surrounded by scrolls and flowers, whereas a palmette topped by a Fleur-de-lys form the upper tier. An additional large Fleur-de-lys is mounted on top.

Two identical dedications inscribed in square Hebrew letters encircle each of the body’s lower edge. One word on each facet, which read:

“Dedicated to the Yeshiva of Rabbi Itzhak and Rabbi Abraham Hadad, May their virtues protect us, amen” (see: History/Provenance).

Scroll shaped hooks for suspending chains and bells are attached to the connection between the facets of the upper tier. The body is surmounted by a gilded bell shaped dome. An apex formed as an acorn is set on top.

The Tables of the Covenant (Ex. 31:18) are twin arched Tables inscribed with the six first letters of the Hebrew alphabet and stand on a crown shaped base.

The Laver and Basin (Ex. 30:18) are represented by a Levite hand pouring water from a laver. This depiction is based on the Levite role after the destruction of the Temple, washing the Priests hands before the ceremony in the synagogue (based on Shulhan Aruch, Orah Hayim, 128:6).

The Eternal light (Ex. 27:20) is depicted as a bowl topped by a lid, suspended from three chains.

The Menorah (Ex. 25:31) has five curved branches supported by a rectangular base.

Two raised open hands with a split in the middle and ring fingers are representing the Priestly Benediction (Num. 6:23-27). On both finials the depictions correspond to the initials of "May their virtues protect us, amen" (Remarks: no. 1). 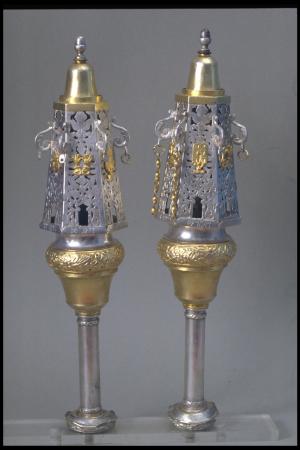 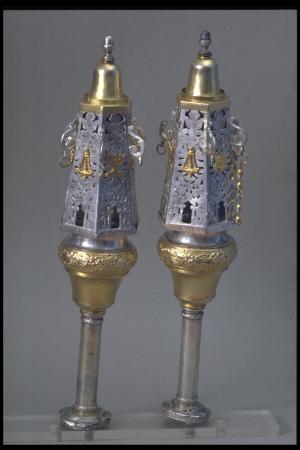 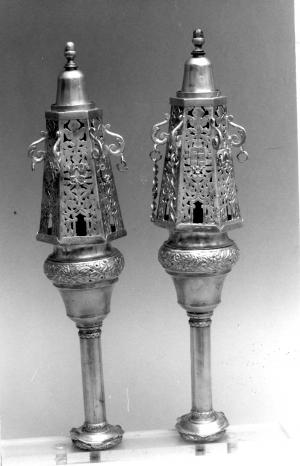 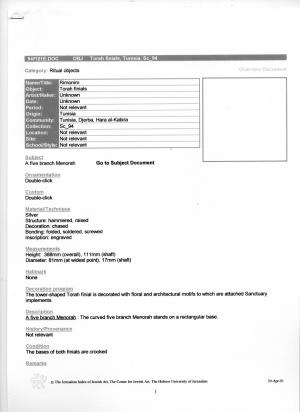 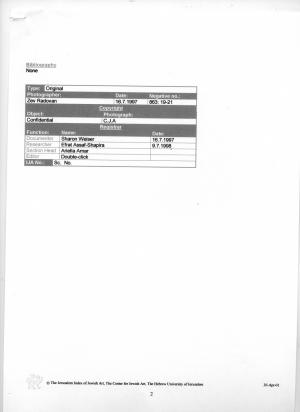 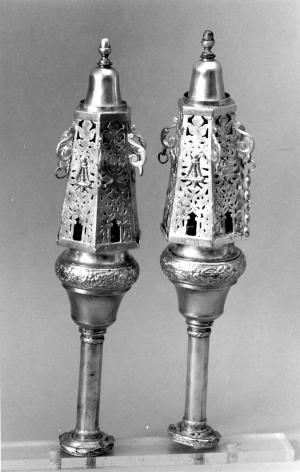 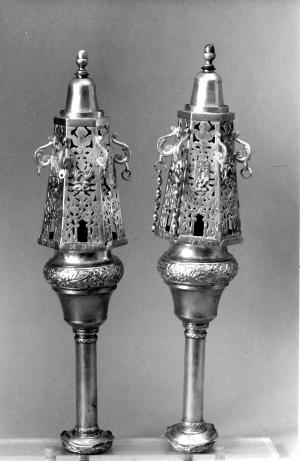 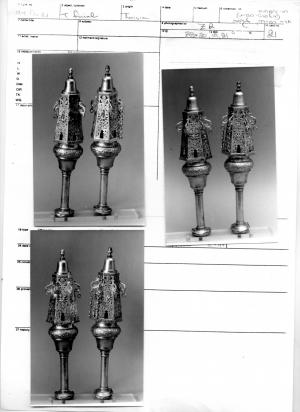 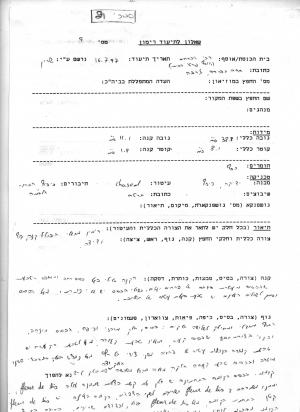 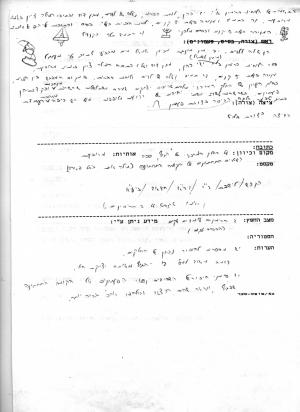 Finials shaped as prismatic towers, formed of lace-like openwork, similar to our finials are common in North Africans communities. However, the depiction of Sanctuary Implements on sacred objects is characteristic to the Italian Jewish artifacts and was introduced to the Tunisian visual vocabulary by Jews from North Italy, who immigrated to Tunis, and established there 'the Leghorns' community, known as Granah. A comparison between the Implements attached to local Tunisian finials and those produced inItaly reveals that some implements were cast inItaly and were attached to Tunisian finials (Sc_096-21), while others are typical to the local production and were designed and cast by Tunisian silversmiths.

The depiction of the Laver and Basin represented as a hand pouring water from a jar, attests to an Italian model. After the destruction of the Temple, the traditional duties of the Priests (Cohen) and the Levites were adjusted to their new role conducted in the synagogue. Consequently, the Levites were required to heed the purity of the Priests prior the ceremony, and pour water on their hands and legs. This new task was first mentioned in the kabalistic book of Zohar (Ra'aya Meheimana, 3 (Lev.), BeHar, page 109a), and was adopted by Joseph Caro, in his halachic book Shulhan Aruch (Orah Hayim, 128:6). Caro determined the role as part of various obligations required to be conducted before the Priestly Benediction in the synagogue.

In the book Hebrew Printers' Marks (fig. 7, p. 6) Abraham Ya'ari conveys that the earliest visual depiction of the theme was part of a collective Printers' Mark representing a group of printers active in Prague in 1512. Two of them R. Isaiah Ben Rabbi Asher and R. Salomon Ben Rabbi Samuel, were part of HaLevi family, and accordingly they depicted two lavers as their family emblem, alluding to the Levite's common role in the synagogue. Since then, the Levites' emblem became prevalent all overEurope, decorating tombstones, sacred objects and coat of arms.

The emblem was not part of the traditional visual language of the local Djerbian Jews, yet it is found on the finials. Their design as a hand pouring water, is typical to the depiction on the Italian finials, and may demonstrate the Italian influence on the local production.

Moreover, this type of finials was not very common in the Djerba. Since there was no Leghorn community but one Jewish Italian family (Priante) in the Island, it is most probable that the implements on the finials penetrated the local design via the capital city Tunis.

The most noteworthy implement, which demonstrates the local Djerbian production, is the menorah. The menorah depicted on our finial consists of five branches, and not the traditional seven branches. By replacing the seven branches with the five branches, the silversmith combined the Jewish conventional attribute with the Islamic hamsa, namely the Islamic open hand. Such five branched menorot are regarded as apotropeic emblems, painted on the external walls of a new married couple, accompanied by fish and an open hand (hamsa), against the evil eye, for good luck and fertility. Depictions as such are prevalent in the Islamic non-Jewish environment in the Island. Nevertheless, they are comprised only of fish and hamsa, thus distinguishing between a Jewish dwelling identified by a menorah, and an Islamic one, which lacks the symbol.

Another motif which is never included in the array of implements in Italy or in Tunis is the Star of David (see: main photograph). The Star enclosing the word "Zion" conveys the new Zionists spirits in Djerba. Such Stars were also introduced to the synagogues, as part of the decorations identifying each window with a tribe.

Suggested Reconsdivuction
History/Provenance
The dedication on the finials indicates that they were originally donated to the Rabbi Abraham and Rabbi Itzhak Learning House. The Rabbi Abraham synagogue was built by Abraham Hadad during the first half of the 18th century. After few years, he built a new compound and dedicated it to his father, Rabbi Isaac (Itzhak) Hadad, for his activities. The new compound was used as a learning house, and a court room (Hadad, Hachmei Israel, 1982, p. 52; Hadad, Sefer Djerba, p. 45; see also: Complex Document, R. Abraham, R. Ma'atuk Hadad, pp. XX). However, the additional compound is known today as R. Ma'atuk Hadad, who served as a religious judge (dayan) during the 19th century (Hadad, Hachmei Israel, 1982, p. 62). The reasons and the circumstances for attributing the compound to R. Ma'atuk rather than to R. Itzhak are still unclear. Yet, the dedication depicted on the finials designed in the early 20th century, reveals that the compound was still attributed to R. Itzhak during that period, and the change occurred somewhere in mid 20th century.
Main Surveys & Excavations
Bibliography
• Amar, Ariella. "Synagogues and Ritual Artifacts," In Tunisia, edited by Haim Saadoun, Jewish Communities in the Nineteenth and Twentieth Centuries. Jerusalem: Ministry of Education and Ben-Zvi Institute for the Study of Jewish Communities in the East of Yad Yizhak Ben-Zvi and the Hebrew University of Jerusalem, 2005. In Hebrew. • Grafman, Rafi, ed. 50 Rimonim: A Selection of Torah Finials from a European Family Collection. Tel Aviv: Tel Aviv University, The Judaica Museum, The Cymbalista Synagogue and Jewish Heritage Center, 1998. In English and Hebrew. • Ya'ari, Abraham. Hebrew Printers' Marks: From the beginning of Hebrew Printing to the end of the 19th century. Jerusalem: The Hebrew University Press Association, 1943.
Short Name
Full Name
Volume
Page
Type
Documenter
Sharon Weiser | 07.97
Author of description
Ariella Amar | 02.11
Architectural Drawings
|
Computer Reconstruction
|
Section Head
Ariella Amar | 02.11
Language Editor
Simona Gronemann | 05.11
Donor
|
Object Copyright
Sc_094
Negative/Photo. No.
Edit Obj. ID: 3490