The scroll represents the type called "scrolls with landscapes II" due to their decorative scheme that features four different landscapes framed in cartouches that fill upper margins and repeat on every sheet in the same order (see also "Additional Remarks"). The scroll from the Jerusalem collection is an exception because none of the landscapes is visible. The scrolls with landscapes are lavishly decorated megillot produced in a mixed technique in which decorative border is printed as a copper engraving (and in some exemplars, colored by hand), whereas the Hebrew text of the Book of Esther is penned by a scribe. The scrolls decorated with this pattern begin with a panel composed of several figurative scenes from the Book of Esther narrative that in the manuscript from the Jerusalem collection is missing. The text columns are interspaced by herms decorated with reliefs, elaborate acanthus leaves and garlands above which are either decorative capitals or putti holding baskets with flowers on their heads. Lower margins are filled with the figurative scenes that chronicle the Purim story, allude to midrashim or other sources; they are interspersed by vases with plants. 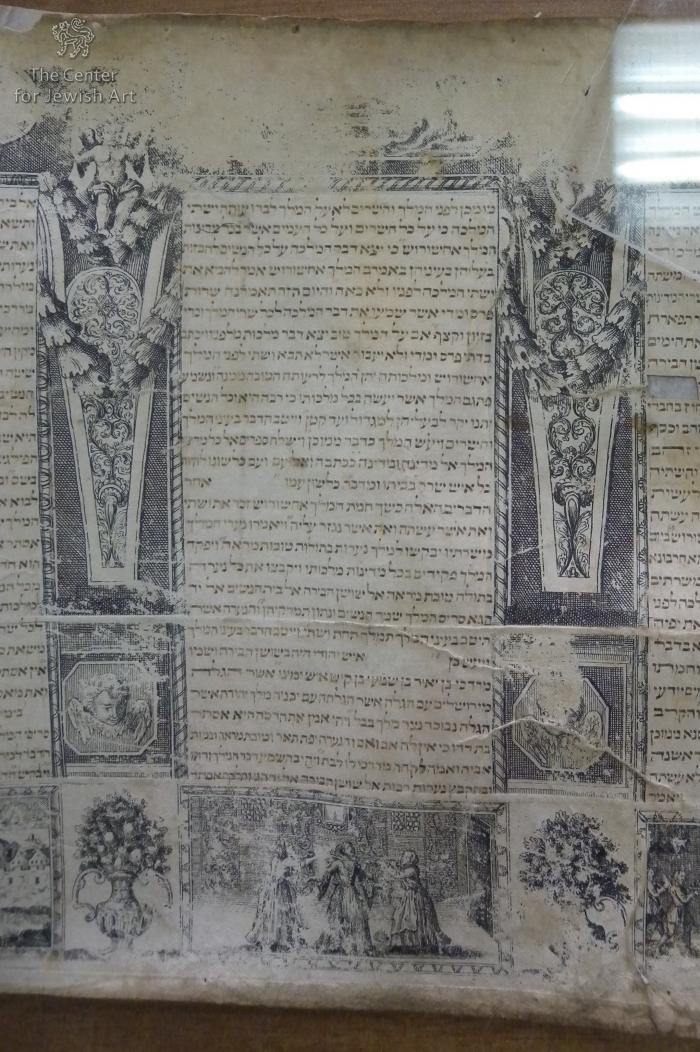 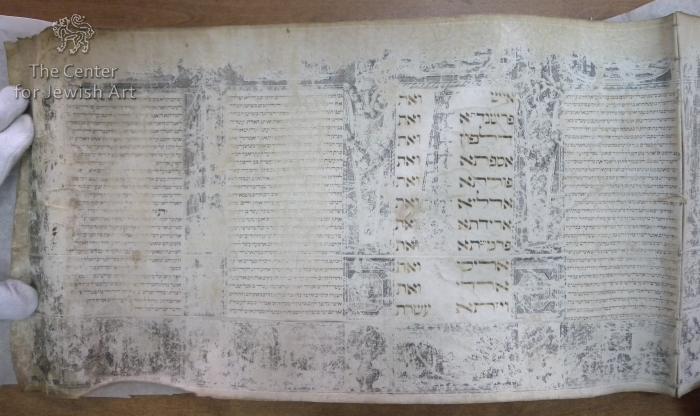 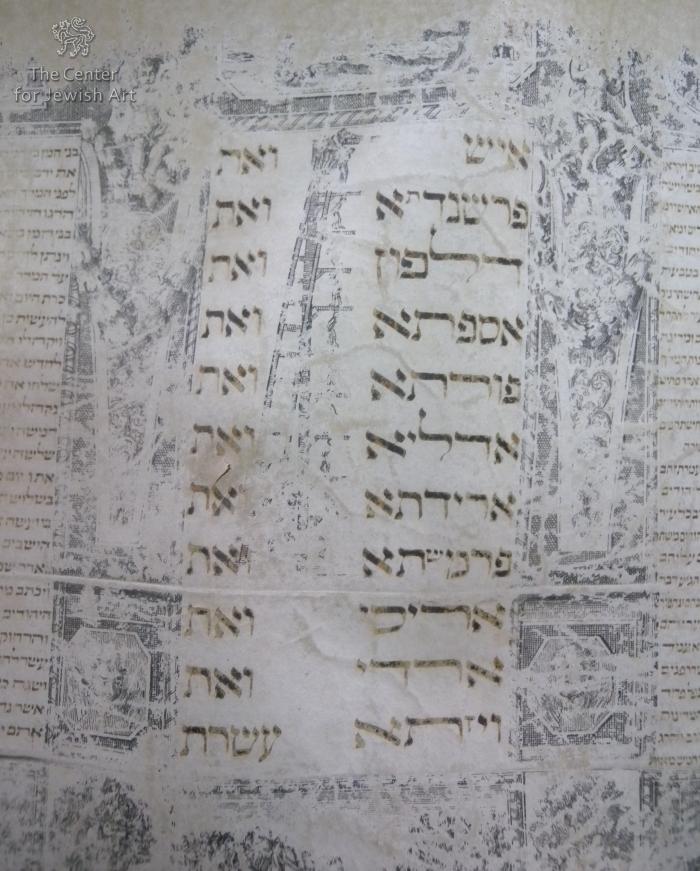 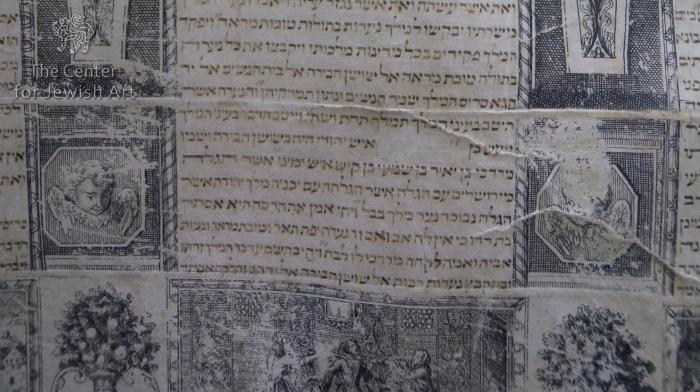 The family of Dutch Esther scrolls from the early 18th century designed by an anonymous engraver whose decorative scheme is characterized by four different landscapes framed in cartouches of different shapes that fill upper margins. The scrolls of this family begin with a panel composed of several figurative scenes from the Book of Esther narrative. The text columns are interspaced by the columns decorated with reliefs, elaborate acanthus leaves and garlands above which are either decorative capitals or putti holding the baskets with flowers on their heads. Lower margins are filled with the figurative scenes that chronicle the Purim story or allude to midrashim and other sources; they are interspersed by vases with plants. The same decoration repeats on all four sheets forming each manuscript. Some of their exemplars are painted by hand.

Dimensions of the selected details in the scroll:
- upper margin - 35 mm;
- lower margin - 45 mm;
- text panel - 127x67 mm;
- columns between the text panels - 30 mm (width);
- bases with angels' heads - ca. 35x30 mm.
Height
Length
Width
Depth
Circumference
Thickness
Diameter
Weight
Axis
Panel Measurements
Iconographical Subject
I | Illustration
C | Columns
P | Putto (Putti in Plural)
G | Garland
A | Angel of Death | Angel's head
V | Vase | Vase with flowers
|
Condition
In general, the manuscript is poorly preserved - it lacks the opening decoration and a large part of the printed border is almost invisible and the decorative details could be recognized on the basis of a comparison with other scrolls adorned with the same pattern. From the printed border, merely the decorations between the text panels are relatively good preserved. The parchment is preserved in a relatively good condition even if in some places the sheets are crumpled. The text on the first two membranes is well preserved, whereas on the third membrane its condition is worse. A tiny rectangle in col. 1 is cut out; most likely in this place, a wrong word was copied, this small part of the sheet was removed and it has not been supplemented.
Extant
Documented by CJA
Surveyed by CJA
Present Usage
Present Usage Details
Condition of Building Fabric
Architectural Significance type
Historical significance: Event/Period
Historical significance: Collective Memory/Folklore
Historical significance: Person
Architectural Significance: Style
Architectural Significance: Artistic Decoration
Urban significance
Significance Rating
Languages of inscription
Unknown
Type of grave
Unknown
0
Coordinates: 0.000000, 0.000000
Ornamentation
Custom
Contents
The Book of Esther in Hebrew
Codicology

The scroll consists of 3 membranes containing 12 columns with 28 lines, except for col. 10 with 11 lines divided into two parts. Every sheet contains 4 text columns.

The text is written on the flesh side of parchment membranes in a small, square Sefardi script in faded black ink.

The opening word of the Megillah is enlarged; similarly, as the letter ח (Es. 1:6) that in addition has decorative legs ended with tiny tendrils. The letter ת (Es. 9:29) is also enlarged.

All ten names of Haman's sons are inscribed in a column of equal width (col. 10); for this purpose, many letters are elongated. Additionally, this section includes the letters that are traditionally written as enlarged or diminished.

The parchment membranes are rather suede, soft, and thin. The recto (flesh) side of the sheets is brighter than the verso side that is not only darker but also more grey. They are stitched.

The scroll consists of 3 membranes; in it sheet no. 3 originally designed for these scrolls is not used, therefore, the frames with narrative scenes nos. 9-12 are absent. This causes that in the present description, frames nos. 9-12 are the same as frames nos. 13-16 in other exemplars of the scrolls decorated with the same border.

On other scrolls decorated with the same pattern: