The right edge of the first membrane is trimmed into a semicircle on which a rosette surrounded by circles and two twigs are painted. The rosette's background is filled with red and green dots. It is likely that originally the rosette was painted gold but over the years, the color has changed into green. This can be assumed on the basis of the frames that surround the text columns on the first membrane on which some remains of gold are still noticeable, whereas on the other sheets they are gold. In the empty spaces between the parshiyot, decorative golden elements are placed. Some of them are barely visible and among these still preserved, there are vegetal motifs. On the third membrane, there are no frames between the text columns, and the intercolumnar spaces are decorated with foliate ornaments in gold. The space between both parts of the column no. 10 that lists the names of Haman's sons is filled with several short golden twigs with leaves and flowers (?).

A separate, not decorated, benediction sheet is rolled together with the megillah.

The scroll is mounted on a wooden turned rod that is ca. 290 mm high. 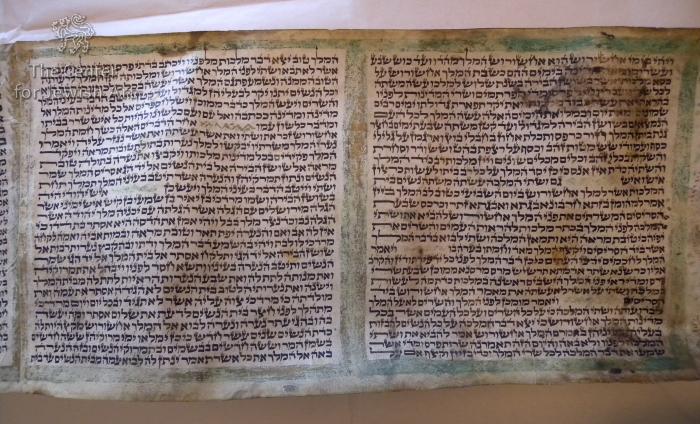 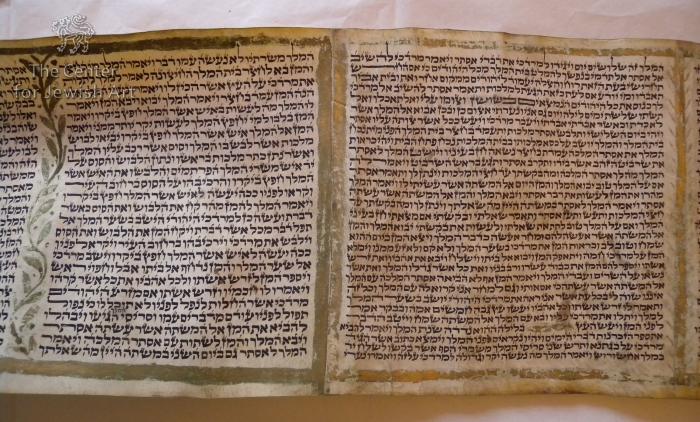 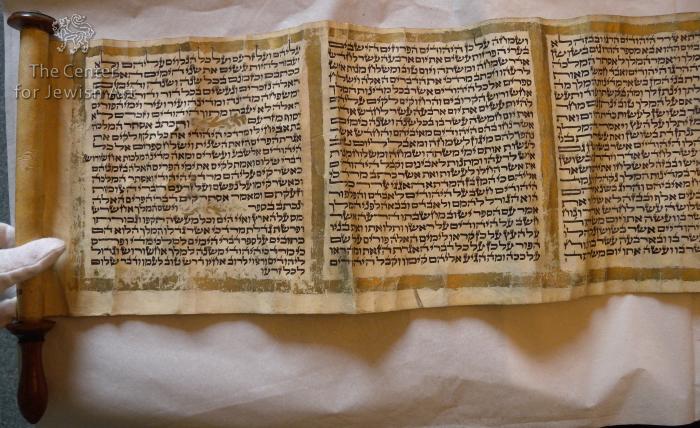 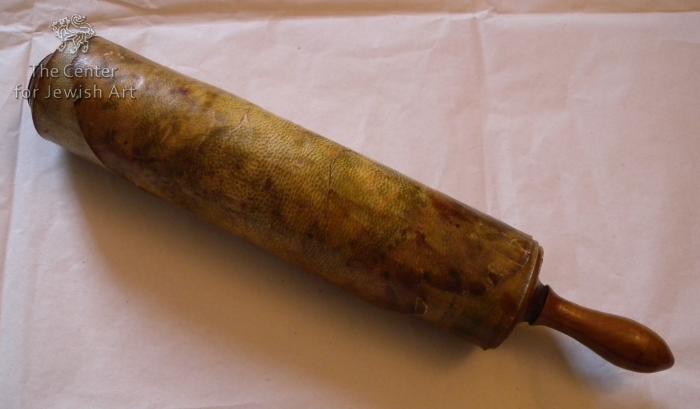 This causes that the density of the handwriting is very different in the subsequent text panels and the size of the letters is varied, e.g. some of them are 3-4 mm high and in the col. 10 they are 8-9 mm. The letter ח in Es. 1:6 is slightly bigger than the letters in the first column; the letter ת in Es. 9:29 (col. 13) is enlarged too. Other traditionally bigger or smaller letters are included in the names of Haman's sons (col. 10).

The text is inscribed in black ink, in a Hebrew square script with oriental or Eastern influences, decorated with tagim but they lack dots at the end of the strokes.

The ruling is invisible and having in mind, the differentiated number of the lines in the text columns, it is unlikely that it has been prepared.

Flags of letters ל present in the first line of the subsequent text columns are higher than in the following lines.

The parchment of the scroll is relatively thick. The blank side - that is the hair side - is more yellow and shiny than the side with text and decorations.

The scroll can be theoretically called a ha-melech scroll because this word appears at the head of some text columns but not at their majority. Nevertheless, it seems that the scribe intended to copy the text in a ha-melech layout but he was not able to follow this arrangement consistently throughout the scroll (e.g. col. 4).

Such irregularity in the layout of the text columns (the text columns contain i.e. 21, 24, 25, 27, 28, or 30 lines) is rare in the scrolls. In most cases, all text columns (except for the column with the names of Haman's sons) include the same number of lines.