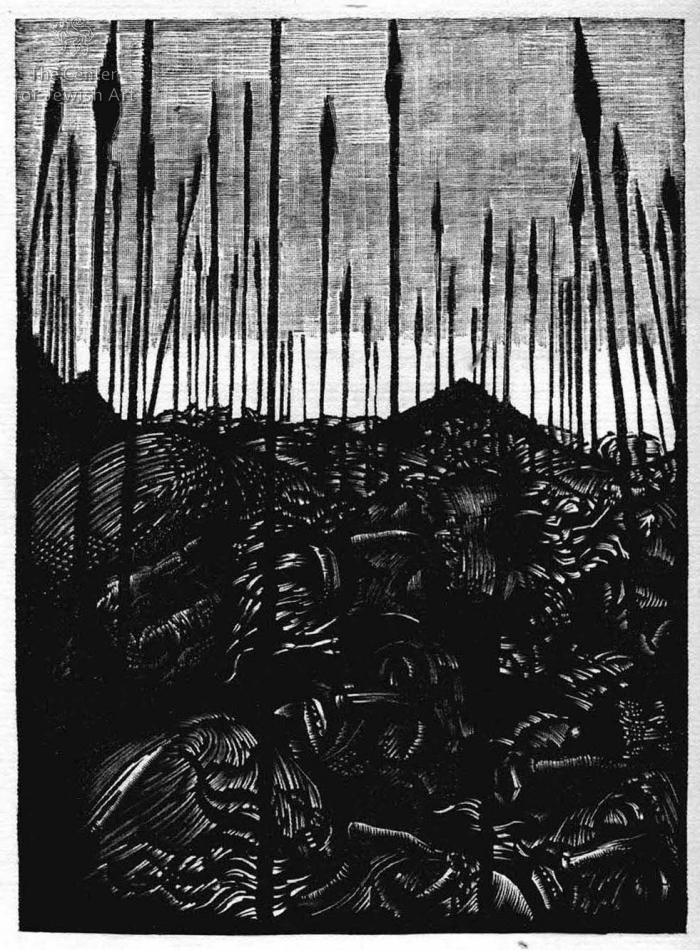 Budko's inspirational sources for this illustration were first, Bialik's descriptions that are extremely visually detailed. The poet describes the heroes thus:

Their heavy, wild nurtured heads fell to the ground, the hair of their curls dragged and looks like a lion's mane;
… the clefts of their poked faces and the groups of exposed chests …
their tangled eyebrows show their terrifying anxieties, the ends of their beards swirl like a group of snakes…

The heroes' weapons are

"…Flint stone swords under their heads, their spears next to their broad shoulders, their arrow pouches
tied to their belts, their lances stuck in the sand".

Budko's illustration for the poem is a masterpiece of virtuosity as a printmaker. He created a monumental work in spite of its small-scale format. The artist divided the image into two contrasting horizontal areas: the lower one is especially dark and full of commotion; Black vertical and diagonal lines varying in width cross the top gray upper area. The entire lower part is inhabited with (at least six) male heads with curly beards (it is possible to notice them more clearly by looking at the woodcut counterclockwise, turning the image in a 90-degree angle). Their mouths are open and reveal rows of teeth. All eyes are closed. Such a depiction of facial features conveys a sensation of deep human suffering.

Budko's illustration places us inside the pile of human heads. Such a vantage point turns us into participants, not merely spectators. We seem to be a part of the Desert Dead or, rather, we too are the desert dead and thus, our identification with the verses of the poem receives a completely different aspect. The artist makes us look at the lances from a vantage point similar to that of the heroes as if we were lying next to them. The lances pierce the pile of human heads into the gray sky area that suggests, perhaps, the light of dawn. Three triangular shapes rise above the ground; they suggest the presence of pyramids. It is interesting to note that of all weapons mentioned by the poem's verses such as stone swords, lances, arrow pouches, and spears, the lance whetted Budko's imagination and made him use it as a component for a dynamic composition.

Bialik's poem describes the sudden appearance of a lion, a snake and an eagle on the scene, as means for contrasting the momentary with the eternal; the animals look at the heroes lying on the desert ground, and then they turn around and leave the scene. In contrast, the heroes "… Those mighty would lie there and jubilees upon jubilees would pass". Budko was intrigued by this part of the poem; a visual rendering of the animals would have turned the allegorical-symbolic aspects of Bialik's poem into a mere narrative. Consequently, he preferred to focus on the eternal rather than on the temporal and refrained from showing the animals in his illustration. 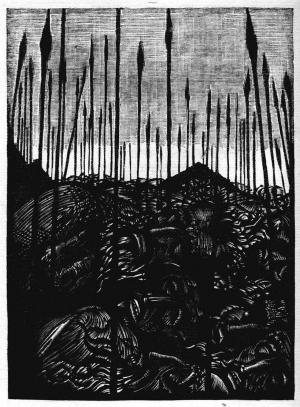