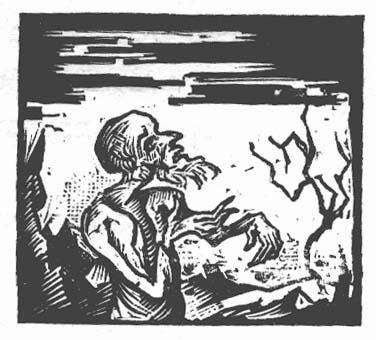 Budko's decision to create an illustration for Bialik's poem stems from the latter extraordinary expression of anger about human injustice and a wish for revenge. In a barren landscape of sharp-edged rocks appears a leafless tree and a crooked, distorted man, skinny and ascetic. His forehead is large, the crown of his head is bold, his nose pointed and a stiff beard grows on his chin. His eyes look upwards. His upper body part is naked; his chest sticks out and the muscles of the right arm are inflated. His hands are skinny and his fingers are long, attached to one another and point upwards. His left palm, bent in distortion, points downwards. In his expressive body language, the crooked man conveys a 'request' (with his right hand) and 'rejection' (with his left). The expressive gestures convey feelings of cessation, that the figure can not fathom their meaning.

The message contained in Budko's illustration expresses the essence of Bialik's poem: destruction and cessation of such magnitude that a sane human being is unable to fathom. The body language of the old man depicted in this woodcut gives the impression that he is a man who lost his mind, facing the catastrophic aspects of the pogrom. 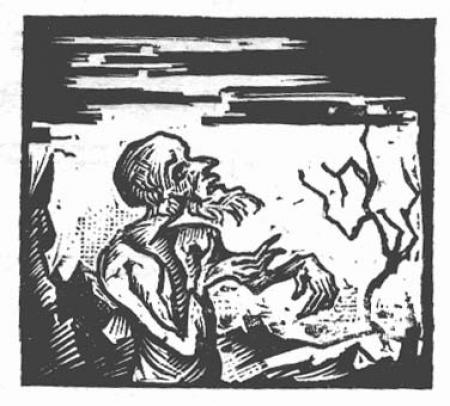