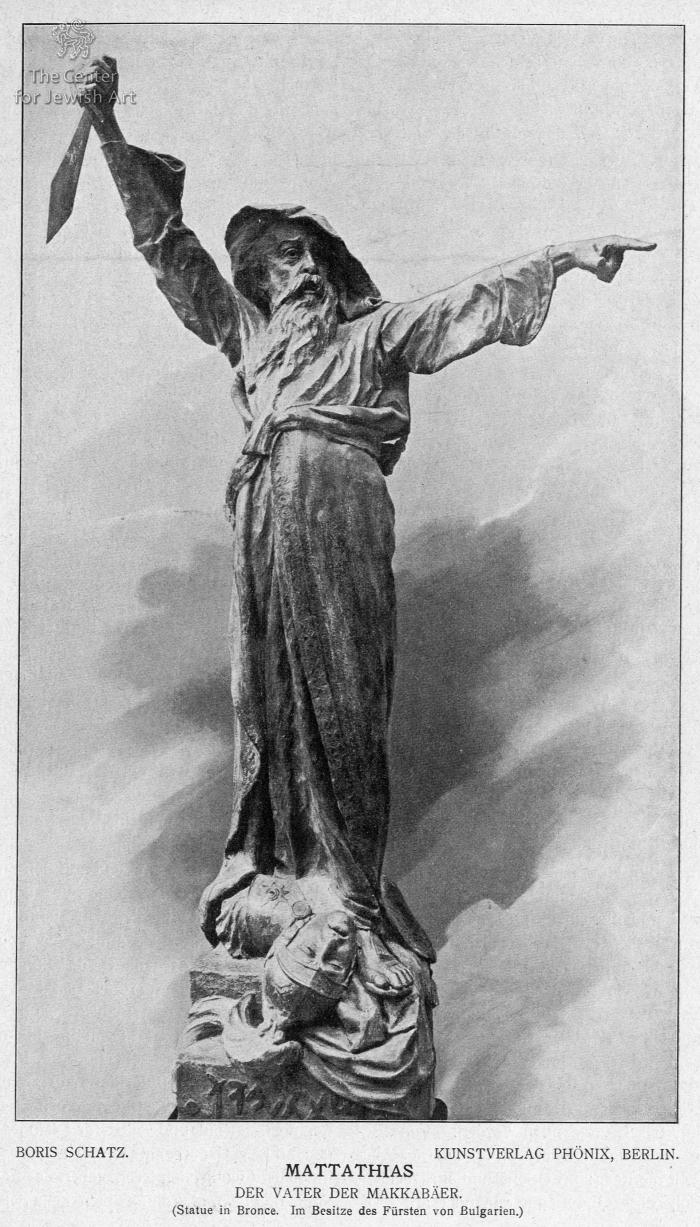 The following description was researched by Alec Mishory.

Boris Schatz (1867-1932), a Jewish sculptor of Russian descent, was the founder and head of the Bezalel School of Arts and Crafts in Jerusalem, established in 1906. He saw the great heritage of Italian Renaissance art as a worthy model for inspiration. He followed in the footsteps of Renaissance artists but did not strive to copy their works; instead, he wanted to base his innovations on their magnificent achievements by extending and accommodating them in a unique way to Jewish visual culture that was renewing itself at the beginning of the 20th century.  Schatz was a fervent Zionist; it was only natural for him to choose the Renaissance, with its spirit of revival, as a model for his personal style. While studying in Paris at the last quarter of the 19th century, Schatz was aware  of the a renewed interest in Italian Renaissance style and especially in works of the most celebrated early Renaissance sculptor Donatello. He exhibited his plaster model for Mattathias at the Paris Salon of 1896.

Matathias was a priest, who lived in 2nd century Land of Israel. His role in the religion-driven Maccabean Revolt against the Greek Empire is related in the Books of Maccabees. After the Seleucid persecutions began, Mattathias when asked by a Seleucid Greek government representative under emperor Antiochus Epiphanes to offer sacrifice to the Greek gods, he not only refused to do so but slew with his own hand the Jew who had stepped forward to do so. He then killed the government official that required the act.

Well aware of the central figure of Matathias in Jewish sagas of bravery and martyrdom, Schatz used his image as an allegory of contemporary Jewish aspirations for freedom and redemption. His sculpture shows the assertive Jewish leader stepping on the corpse of the Greek soldier (who wears a helmet), calling his people to rise from under their enslavers. Schatz uses a traditional motif of Renaissance sculpture: the visual expression of ideas such as Good-Right stepping on Evil, and symbolically overpowering it. Renaissance sculptors used mythological figures in their depiction of allegorical themes such as "Victory of good over evil" or "Victory of democracy over tyranny." Perseus and the Severed Head of Medusa by Benvenuto Cellini (1500-1571) shows the heroic Perseus, who has just vanquished and beheaded the monstrous creature Medusa. He stands proudly, holding the creature's severed head, her body at his feet. Perseus' heroic deed was assigned political meaning; it symbolized the victory of democracy over tyranny or the triumph of the Medici family, rulers of the city-state of Florence, over their enemies. Schatz followed the tradition by similarly depicting Mattathias. 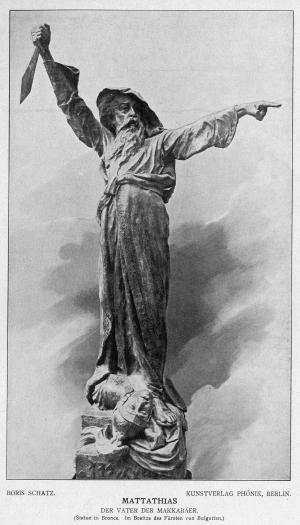