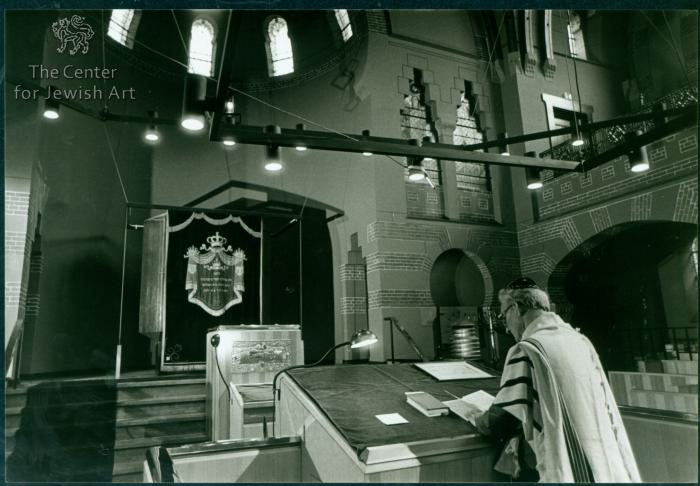 Synagogue in Groningen, The Netherlands - Interior

The monumental synagogue, designed by Tj. Kuipers and Y. van der Veen, was built on the site of a former synagogue (dated ca. 1756/57) and was consecrated in 1906. The layout of the synagogue contained three aisles, a clerestory, side galleries and a semicircular apse in which the Torah ark was located. The architectural style of the building can be defined as oriental and was influenced by the architecture of Berlage, especially with regards to the combined use of brick and natural stone details. The front façade contains a tondo window, featuring tracery in the shape of the Star of David. The main entrance includes a Hebrew inscription referring to Deuteronomy 28:6 and the date 5666 (1906 CE).

Two large towers, square in shape at the lower part and octagonal at the upper part, are positioned at the side of the front façade and flank the main entrance. Both towers are topped by a dome. The main oriental features of the synagogue not only include the design of the towers but also the horseshoe-shaped arches on the exterior and the apse and the arcades of the interior. On top of that, the stained-glass windows depict the column arcade of the thirteenth century synagogue of Toledo.

The interior of the synagogue includes a wooden barrel-vaulted ceiling situated between the columns. The women’s gallery can be found along three sides of the building.

The synagogue was closed in the year 1942. After the Second World Wat, the Jewish religious services resumed until 1952. The building was subsequently sold and used as a space for laundry and dry-cleaning services, a church and, lastly as a space for meeting rooms. In 1976, the municipality of Groningen bought the building. The interior which was subjected to the many changes of the use of the building, was renovated by the architect A. Th. Dubbeling in 1980/81.

In 1981, the building was again consecrated and used as a proper synagogue. The building is also used for cultural activities by the Stichting Folkingestraat Synagoge. 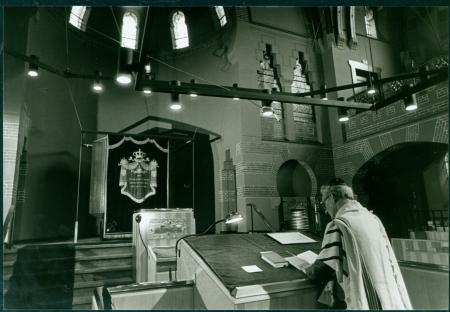 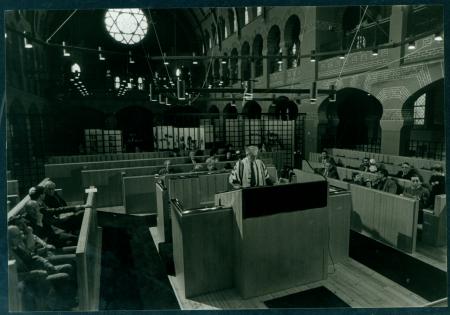