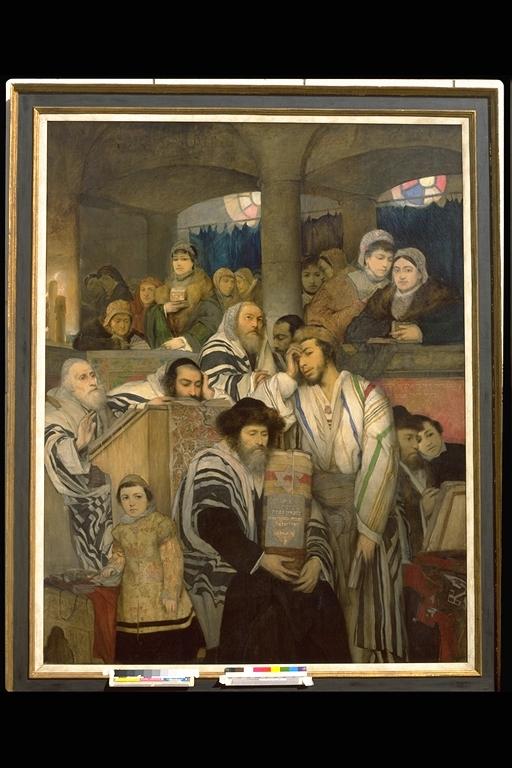 Yom Kippur prayer in a synagogue. Gathered around a bimah, the men and boys are depicted in the foreground of the picture. The women are seen behind them in the low, open gallery of the ezrat nashim (women’s gallery)..   The men are bearded, wearing talitot, and depicted in various ages, poses and expressions of prayer and contemplation. The grey-bearded man sitting in front of the carpet-covered bimah--wearing a shtreimel and holding a torah in his lap—is a portrait of the artist’s father. The torah-mantle is adorned with an embroidered star of David and an inscription in block Hebrew letters over a grayish background reads: Donated in memory of our teacher the late Moshe Gottlieb the righteous in the year 5638 (  כ"ת/נדבה/לזכרון נשמת/המנוח כמהר"ר משה/גאטליעב זצ"ל/תרל"ח/לפ"ק). A torah pointer is hanging from one of its azai hayim.   The artist depicted himself in the painting three times: First, he is pictured as a young man standing to the right of the bimah while leaning on it with his elbow in a melancholic pose.  His head rests on his right hand; his left hand holds a closed book in which his finger is tucked as a marker. His facial features bear a likeness to the artist at the time of the painting. He is wearing a small fur-trimmed hat and a long white coat with colored stripes over his talit katan. A broad sash is wrapped around his waist. A medallion with a star of David around the Hebrew word 'king' is hanging from his neck. The artist is depicted twice more--these times as a child--on the front left and on the front right of the picture. On the left--is a boy wearing a silver kippah decorated with blue and red stones, a golden floral brocade coat with a silver collar and tucks, a matching shirt below, and black pants. A similar medallion with a star of David is hanging around his neck, this time it is inscribed with the Hebrew letters M.G.--the artist's initials. The boy's right hand is resting on an open book where the word מלך (King) is visible, next to a shofar and a red siddur bag, all lying on a low curved? bench that stands at the foot of the bimah. The same facial portrait of the artist as a boy is seen on the left. This time he is sitting next to a brown-bearded man --probably a young version of his father--.dressed with a dark kippah and coat. The boy is leaning against his father who reads from a big book that stands on a table covered with a red cloth in front of both of them. . A Hebrew inscription on the wall behind them reads:

The first line quotes Num. 10:35 The source of the second line is vague.

Three men are depicted behind the bimah: at the center, next to the central pillar, stands a grey-haired man wearing a prayer shawl over his head and a silverish/gold-coloured embroidered skullcap under it. Next to him on the left a dark-bearded man is reading from a book, leaning closely over it. On the far left an old, white-haired man is raising his right hand in a blessing gesture. A profile of a closed-eyed, dark-complexioned man is depicted behind them, just before the central pillar, holding an open book close to his lips.   The crowded women-section contains traditionally dressed (רובנס - תלבושות הנשים?) women in various ages and poses. All have head-coverings and several are wearing sterntichl and breastplates characteristic of German-Jewish women of the time. Some women are standing, some sitting. Some are looking into the men’s section or are reading from their mahzorim; others are conversing amongst themselves. The artist's fiancée, Lauran ?SHenschel, is depicted twice: Once, she is the young woman standing to the left of the column, holding a book close to her chest. She is also the young woman standing at the front-right section of the gallery who leans towards a seated older woman next to her on her right, probably her mother.     The ceiling above the women's section is vaulted, supported by round columns. A hanging curtain is in the rear of the gallery, partially blocking the two circular, colored-glass windows on the back wall. On the far left, large lit candles are perched on the wall separating the two sections. 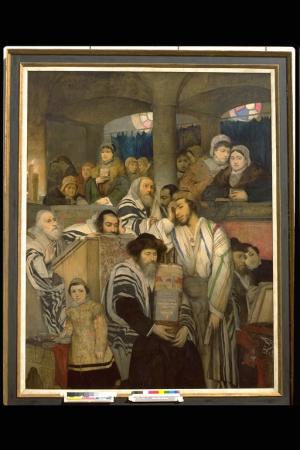