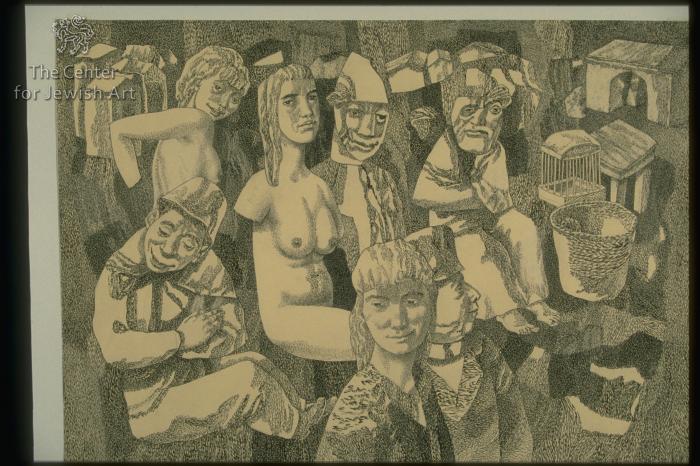 © Center for Jewish Art, Photographer: Radovan, Zev, 09.1995
Figures of several men and women and few objects are set along the picture's plane. Their clear outlines and strange cuts create an effect of a collage. In the lower left part one can see a figure of a fool with a bucket-like hat on his head, sitting on the ground. His legs are stretched rightwards while the upper part of his body is shown frontally. He sits smiling strangely with his head bowed to the right shoulder and with his hands crossed on his bosom. Above him there is a half-figure of a young naked woman. Her body is shown in a right profile though her smiling face is turned towards the viewer. The hand of her right arm bent in the elbow and drawn back seems to be broken off as if it were an antique sculpture. To the right there is a torso of another naked woman sitting in a three-quarter turn to the right. Her arms and, apparently, the left leg are broken off. She has a long hair and a sad face expression. Next to her there is a bust of a man with a white hood upon his head and with a face as though covered with scars. The last personage in this row is, supposedly, a man wrapped in a long cloth sitting in a three-quarter turn to the right. He has a huge, mask-like distorted face. To the right stand a large wattled basket, a cage and a stool. In the lower center one can see a bust of a young woman with long light hairand a bust of an elderly man behind her. The woman's corps is turned rightwards though her smiling face is turned towards the spectator. The man's figure is shown frontally but his face is seen in a right profile. He has a hooked nose, fat cheeks and neck, and wears a tall hat and a coat with a karakul collar. In the upper corners and above the figures one can see some buildings. 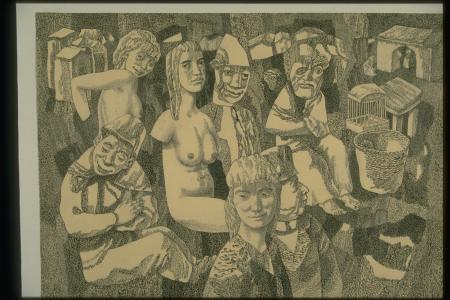