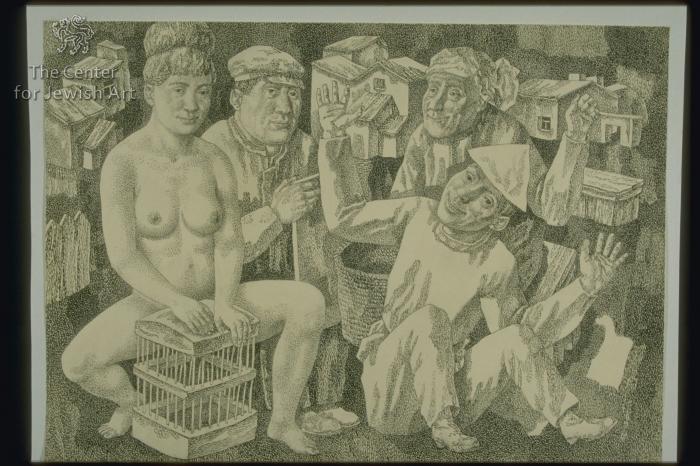 © Center for Jewish Art, Photographer: Radovan, Zev, 09.1995
Figures of three men and a naked woman are placed on the foreground. The woman sitts to the left facing the viewer. She has a high hair-dressing and holds a cage between her legs set apart. Next to the woman and a little bit behind her sits a man in a peaked cap. He has disproportionally short legs and holds a board before him. A young man looking like a fool sits on the ground to the right. His legs with small feet are turned rightwards while his body is turned to the left. His hands are raised and the head, crowned with a kind of triangular white hat, is thrown back. He smiles. The last personage is placed behind the young man. It is an old man sitting on a low bench facing left. His left hand is raised. His head is tied with a kind of turban or a kerchief. A basket is located between the figures of the three men. Houses and a piece of a fence are visible behind the figures on the background.
Summary and Remarks