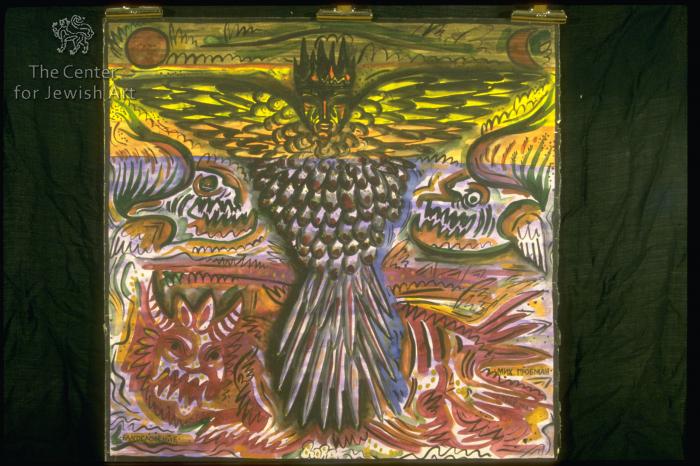 © Center for Jewish Art, Photographer: Radovan, Zev, 02.1994
The picture represents a fantastic bird against a background of a fantastic landscape. The big bird depicted in full face and full length is placed in the center of the composition and occupies the most of it. The background representing a fantastic landscape is divided to four parts. Two narrow upper parts symbolize the Heaven. The dim violet sun with a black contour is depicted in the left upper corner of the composition and a waning moon. The general color of thither part is brownish with black and dark-green horizontal strokes and the second part is executed in yellow and dark-pinkie color reminding a sunset. The head of the bird and its spread wings are placed here. The bird wears a seven-cogs crown on its head; its wings are executed by wide black and white strokes and the sky appears through its. The third part is blue and symbolize a sea. Two enormous fishheads with plenty of teeth painted in tangled twist lines and the body of the bird are set here.Its black body with violet spots reminds the fish-seals. The tail of the bird sharp feathers is placed in the lowest part of the composition. A big fantastic beast with a human face lies behind it. It has two horns, two big rabbit ears, big eyes and a big mouth with sharp teeth. Its tail reminding a tail of fish is depicted on the right. The color of this part is green. 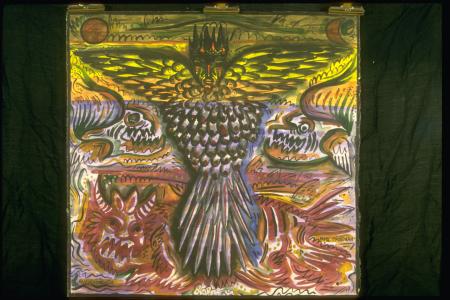